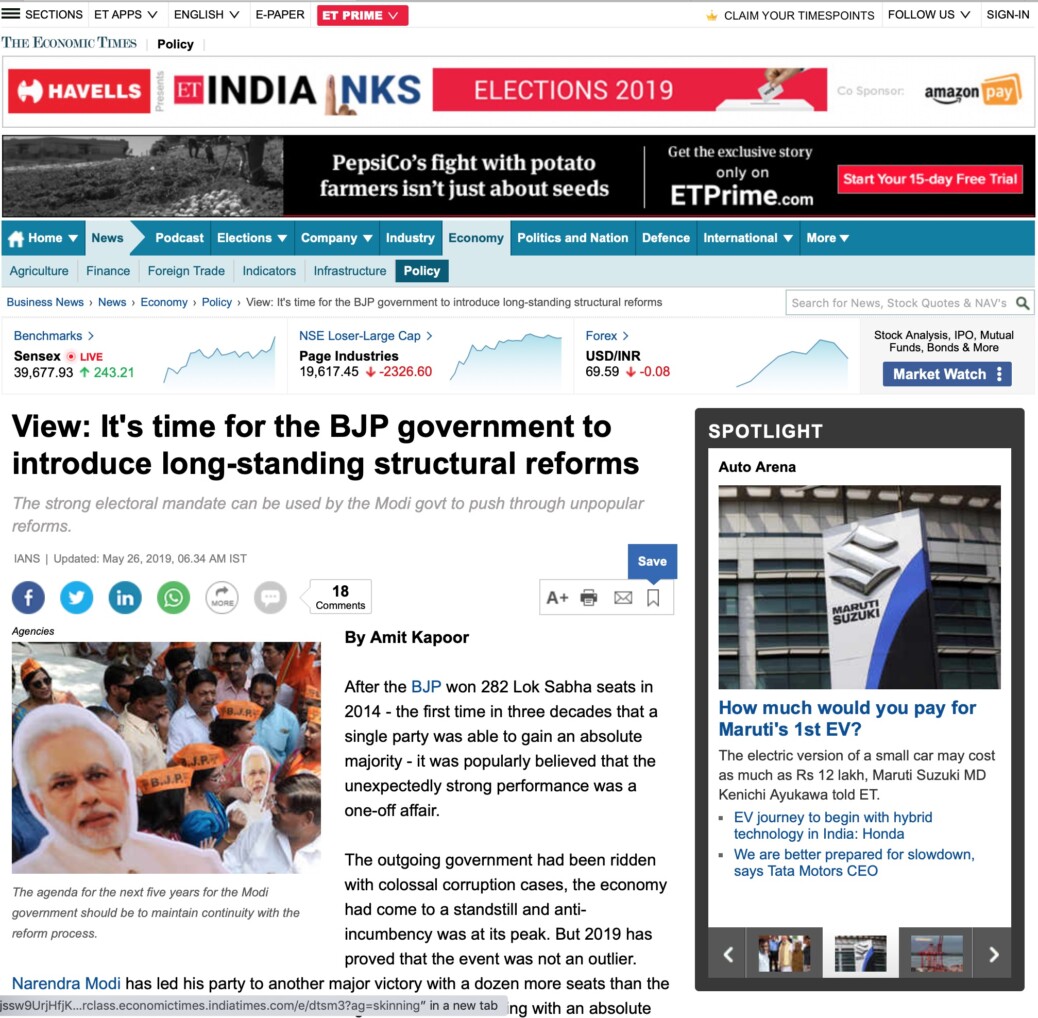 After the BJP won a tally of 282 seats in 2014 – the first time in three decades that the single-largest party was able to draw an absolute majority – it was popularly believed that the unexpectedly strong performance was a one-off affair. The outgoing government had been ridden with colossal corruption cases, the economy had come to a standstill and anti-incumbency was at its peak. But 2019 has proved that the event was not an outlier. Narendra Modi has led his party to another major victory with a dozen more seats than the last time – the first time in five decades when a government is returning with an absolute majority for the second time.

While such a strong mandate is commendable, it shows the faith that the Indian population rests on the party and the immense expectations they hold from it. Moreover, it is a rare opportunity in a complex democracy like India for any party to have the power to introduce bold reforms and long-lasting transformations with little partisan logjams. By voting the party into power with an absolute majority again, the Indian voters expect that the government will adopt such a decisive stance. The BJP has also projected itself to be action-oriented in its first term.

Over the last five years, the government has introduced a string of reform measures that were aimed at enhancing the socio-economic development of the country. The economic measures were directed at increasing productivity of the factors of production including land, labour and capital.

In case of land, the government introduced the Real Estate (Regulation and Development) Act, 2016. The act, by mandating that 70 percent of the funds collected from the buyers should be used for construction purposes only, helped in addressing the project delays and inefficiencies in the system.

For addressing the labour productivity issues that the country is facing, the government set up National Skills Development Corporation that has provided training to 5.2 million students. This will help in the optimal utilization of country’s demographic dividend.

Lastly, the government undertook a couple of moves to address capital-related issues. Since the BJP came into power in 2014, the banking sector has been under stress of mounting bad debt. As of March 2017, bad loans accounted for 10 percent of banking assets. The best option of salvaging the situation was by targeting the problem of debt resolution. The Insolvency and Bankruptcy Code was passed in 2016 as a result. It allows either the creditor or the borrower to approach the National Council Law Tribunal (NCLT) to initiate insolvency proceedings and lays down provisions for debt resolution within a span of 3-5 months.

Apart from addressing the issues prevalent in the economy, the government undertook the biggest tax reform in the country with the introduction of the Goods and Services Tax (GST). The tax law, which had been in the works for years, unified the entire country under a uniform tax system and eased the flow of goods and services across state borders. Even though there were a few wrinkles in its implementation, GST would help in reducing the transaction cost for businesses over the long-run and improve its ease of doing business.

Along with economic reforms, the government also focussed on improving the living standards of the citizens. Two of the biggest reforms on the social aspect have been on the areas of sanitation and financial inclusion. In 2014, India was a global laggard in sanitation coverage, having significantly high open defecation rates even in comparison to poorer nations like Pakistan, Bangladesh and several sub-Saharan countries. To tackle this issue of low sanitation facilities and improving the child health indicators like mortality, nutrition and stunting, the Modi government launched Swachh Bharat Mission, aiming to make India open-defecation free. The National Sample Survey Office’s Swachhta Status shows that the number of rural households with toilets have increased to 64 percent from 45 percent during the period 2014-15 to 2017-18, while people defecating in open have reduced from 52 percent to 33 percent in the same period.

The other flagship scheme of the government, the Jan Dhan-Aadhaar-Mobile (JAM) Yojna, was launched to dismantle India’s archaic subsidy transfer system that has been ridden with corruption, leakages and inefficiencies. The scheme has provided universal access to bank accounts and unique identity to all individuals by allowing biometric authentication to circumvent intermediaries and reduce market distortions with direct transfers. Currently, 100 percent of the beneficiaries of PAHAL, 88 percent beneficiaries of MNREGA, and 86 percent of the PDS beneficiaries are linked with the Aadhar. The program delivery is now taking place via direct benefit transfers (DBT). In 2018-19, around INR 2 trillion was delivered through DBT.

The agenda for the next five years for the BJP government should be to maintain continuity with the reform process; leveraging upon the ones that have already been undertaken and venturing into ones that have been left untouched since India’s independence. The schemes and initiatives that have been the highlight of the last five years surely have scope for improvement on the implementation aspect. Meanwhile, the strong electoral mandate can be used to push through unpopular reforms that the country needs to solve its perpetual economic ailments.

Two of such major reforms are those of land acquisition and labour flexibility. India has had an ugly record of industrial projects falling into a limbo due to land acquisition issues. Since land is a state subject, the central government needs to address these in a decisive manner in consonance with its regional partners. Secondly, it is a well-documented fact that the country’s rigid labour laws have disincentivised firms to grow and formalise. Indian firms have, thus, lost out on crucial economies of scale due to these limitations.

The next five years are an opportune time for the BJP government to introduce long-standing structural reforms that India’s socio-economic fabric has severely required since its independence. Even the 1991 reforms were majorly market-oriented while the factor-side of the economy was left untouched. With the rapidly changing political landscape of the nation, it is time to infuse a similar exuberance within the economy.

The article was published with Economic Times, Business Standard, Bihartimes, Outlook India and Millennium Post on May 26, 2019.