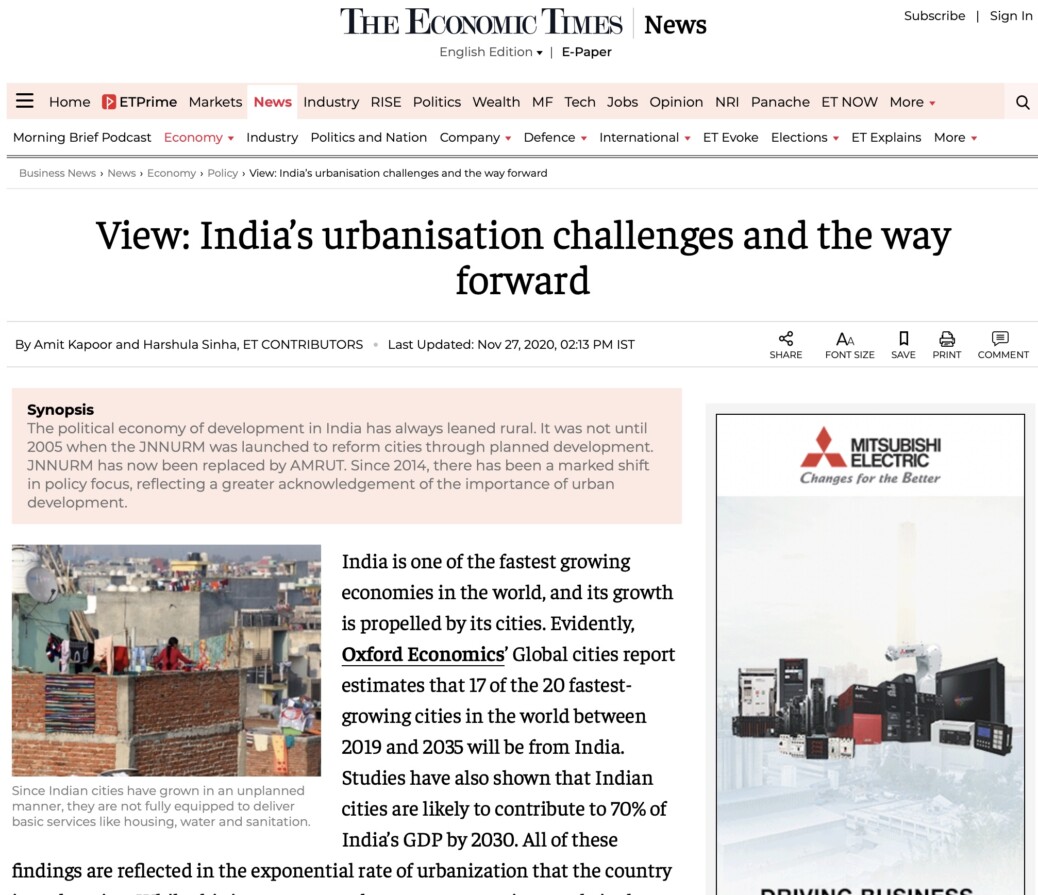 India is one of the fastest growing economies in the world, and its growth is propelled by its cities. Evidently, Oxford Economics’ Global cities report estimates that 17 of the 20 fastest-growing cities in the world between 2019 and 2035 will be from India. Studies have also shown that Indian cities are likely to contribute to 70% of India’s GDP by 2030. All of these findings are reflected in the exponential rate of urbanization that the country is undergoing. While this is a turn towards greater economic growth, it also comes with a set of challenges with regards to liveability. Delving deeper into those challenges reveal an inherent limitation within the framework of governance.

Metropolitans are the centres of economic growth and job creation. They enjoy economies of agglomeration that ensures steady growth, which further draws in the talent pool from different parts of the nation, leading to greater innovation and accelerated economic growth. However, it also entails more and more people moving to urban agglomerations. Since Indian cities have grown in an unplanned manner, they are not fully equipped to deliver basic services like housing, water and sanitation to the growing number of residents. Hence, despite high economic growth, India cities are also the centres of high income inequality and poor quality of life.  In 2019, New Delhi and Mumbai ranked 118th and 119th respectively, on the Economist Intelligence Unit’s Global Liveability Index 2019 that covered 140 cities.

The political economy of development in India has always leaned towards rural development. It was not until 2005 when Jawaharlal Nehru National Urban Renewal Mission (JNNURM) was launched to reform the cities through planned development initiatives. Many of the projects undertaken were, however, unfinished. JNNURM has now been replaced by Atal Mission for Rejuvenation and Urban Transformation (AMRUT). Since 2014, there has been a marked shift in policy focus, reflecting a greater acknowledgement of the importance of urban development. Hence, Smart Cities Mission, Pradhan Mantri Awas Yojana – Housing for All (Urban) (PMAY-U), and Swachh Bharat Mission (Urban) (SBM-U) are some of the major urban development programmes that have been in operation for the last five to six years.

Through focus on different components like housing, water supply, urban mobility, sanitation, etc., the programmes aim at improving the liveability of Indian cities. While the programmes have achieved milestones, there is still room for improvement. Some of the challenges that have emerged are under-utilisation of funds, slow progress, low participation of local governments, inequitable distribution of benefits, and lack of synergy and coordination between the programmes and implementing agencies. For instance, SBM-U surpassed its target in construction of toilets but AMRUT fell behind in ensuring water supply for all, rendering many toilets non-functional.

Building on the lessons learned from JNNURM, the programmes also aimed to enforce decentralisation by devolving some functions to Urban Local Bodies (ULBs), but the ground reality told a different story. Enforcement of the 74th Constitutional Amendment Act, 1992 is one of the main challenges in the implementation of all the urban development programmes. The amendment had added ULBs as the third tier of government to decentralise governance down to the grassroots. However, the provisions of the Act leave a lot of power in the hands of the state government, which ends up depriving the local governments of the autonomy required by them to perform their designated role. This challenge is at the root of issues that plague the existing programmes, be it the operational difficulties or the issue of under-utilisation of funds.

According to the Constitution, there are 18 broad functions which can be performed by the ULB, but devolution of the functions is decided by the state government. States also have the discretion to define specific criteria for categorising various types of municipalities. They can remove the municipalities’ jurisdiction over certain geographical areas by categorising them as ‘industrial township’ under an appropriate state law. It dilutes the power of the municipalities as this proviso can easily be exploited by state governments who can take over the governance of any area they please.

The lack of autonomy of ULBs also extends to finances. Municipal corporations have two types of revenue bases¾revenue and non-revenue, but property tax is the only major internal source. However, issues of undervaluation, non-availability of database of properties, low rates, low collection efficiency and lack of indexation of property values disable the ULBs from fully accessing it. Further, the Constitution empowers the state governments to also decide on devolution of tax revenues and grants-in-aid to urban local governments. In this way, ULBs neither have financial autonomy nor the capacity to raise funds, so they heavily rely on public sources. It can be gauged from the funding pattern of many of the projects under the urban development programmes. The programmes require ULBs to raise a portion of the funds for projects, but do not have provisions for augmenting the capacity of ULBs to raise resources. Resultantly, the largest portion of finances remain public funds.

Although there is a broad range of functions for ULBs outlined by the Constitution, the revenue required to deliver on those functions is dependent on the Centre and State. The imbalance between the powers and responsibilities assigned to ULBs results in their ineffective functioning.

Lastly, the governance structure of Census Towns (CTs) is another concern that affects the quality of life in urban areas. There are very few metropolitan cities in India, so India’s urbanization journey is actually being driven by the CTs, which form urban agglomerations concentrated around the metropolitans. A village is classified as CT by the Registrar General of India (RGI) as a result of the population census exercise if they pass the threshold of 5,000 population size, population density of 400 people/sq. km., and 75% of male workforce working in non-farm activity.

The population in CTs is categorised as “urban” but the GDP generated is recorded as “rural”, which distorts the estimation of per capita GDP for the urban sector as well as the extent of urbanization in the country. It is because despite its urban characteristics, a CT is governed by a Panchayat. The state exercises the right to categorise settlements as “urban” and “rural”, and are often apprehensive of bringing CTs under the “urban” fold, as it implies application of urban regulations on CTs. The stricter regulations and high tax rates on basic amenities could be unwelcome to the population and reflecting in their voting behaviour. As a result, CTs, the peri-urban areas that take some of the pressure off of metropolitans in terms of providing basic amenities to residents, are governed by a body that is ill-equipped to understand its developmental needs.

Therefore, the framework of governance, and particularly the 74th Constitutional Amendment Act can be revisited to add provisions that can better enforce decentralisation of governance in urban areas. In the meanwhile, programmes and schemes can still be more effective if those are designed while accounting for the shortfalls in the Constitution, such that ULBs are more empowered to participate in governance.

The article was published with Economic Times on November 27, 2020.