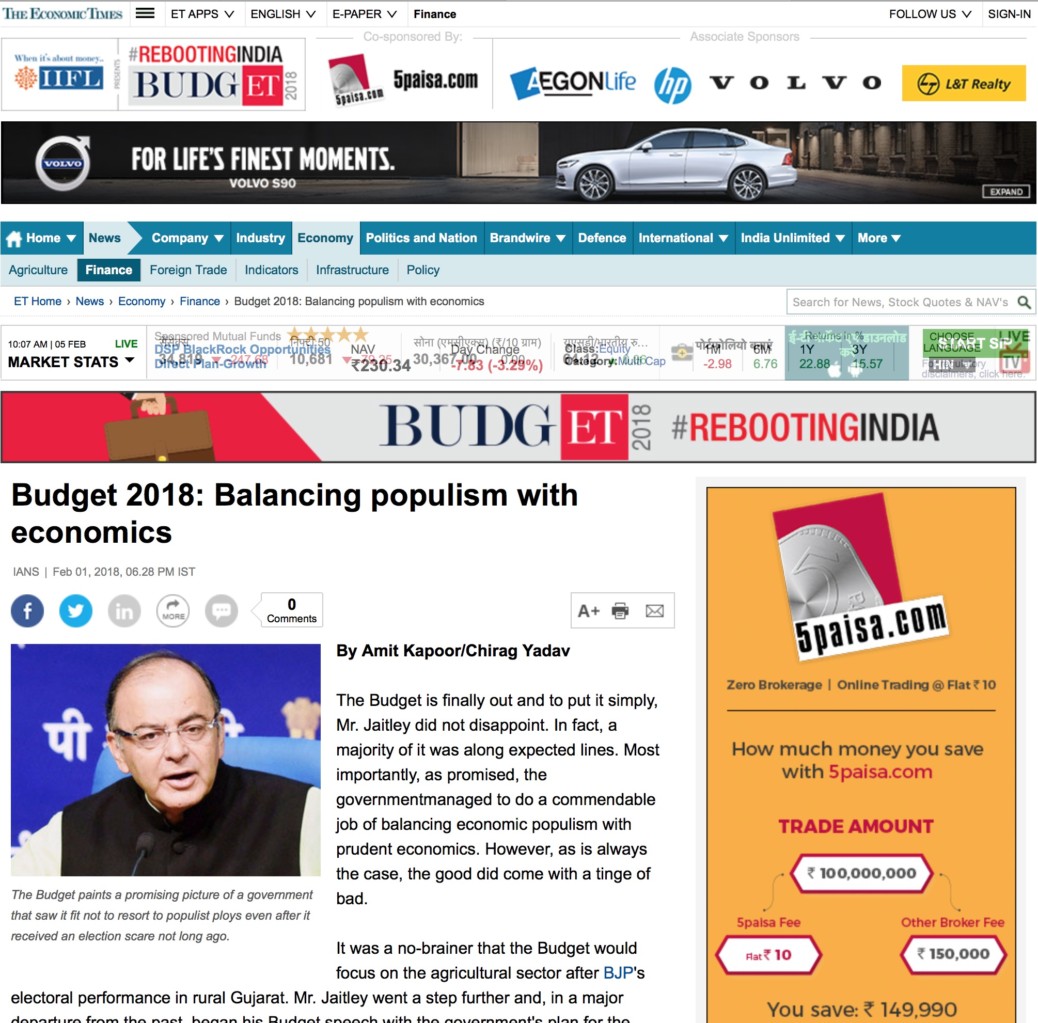 The Budget is finally out and to put it simply, Mr. Jaitley did not disappoint. In fact, a majority of it was along expected lines. Most importantly, as promised, the governmentmanaged to do a commendable job of balancing economic populism with prudent economics. However, as is always the case, the good did come with a tinge of bad.

It was a no-brainer that the Budget would focus on the agricultural sector after BJP’s electoral performance in rural Gujarat. Mr. Jaitley went a step further and, in a major departure from the past, began his Budget speech with the government’s plan for the farming community. He unveiled a litany of measures in line with the government’s aim of doubling farmer incomes by 2022.

First, the Budget allowed for setting the minimum support price (MSP) at 1.5 times the production cost for kharif crops. Even though this support to farmers will help increase their incomes, there are two questions that need to be asked. Will the effect of this jump in MSP be inflationary? Also, will it take away the incentive to reduce production costs? The answer to both of these questions is probably in the affirmative. Only time will tell if the move has any such negative externalities for the economy, but the government should be prepared with commensurate remedies to tackle the eventuality.

The second significant move on the agricultural front has been a push to boost agri-business activities across the country and improve agricultural markets. Allocation has been doubled for enhancing food processing and specialised agro-processing networks from Rs 700 crores to Rs 1,400 crores. The government has also decided to follow a cluster-based approach for stimulating agricultural production. Further, in a bid to formalise agricultural markets, the 470 Agriculture Produce Market Committee (APMC) promoted markets would be connected to the e-nam market platform and over 22,000 rural agricultural markets would also be developed. These are positive moves to remove the middle man and ensure farmers receive the bulk of the prices paid by the consumer.

However, the e-nam platform is still in its formative stage and its performance has not been adequately tested. A bulk of the sale of agricultural products is still done through commission agents and it is doubtful that the practice will be done away with any time soon. On the other hand, the development of agri-business clusters provides a viable solution to formaliseagricultural markets. The gains from all of these measures, however, can only be expected in the long-run.

Another major highlight of the budget has been its focus on the social sector. Healthcare and education received their fair share of budgetary focus. In fact, Mr. Jaitley took pride in announcing the “world’s largest healthcare programme” that would provide Rs 5 lakhs per family per year for medical reimbursement under National Health Protection Scheme for around 10 crore families across India. This is a positive move by the government towards universal health coverage in the future. As for education, digitalisation of education and training of teachers was given a boost. In monetary terms, the increase in budgetary allocation from last year is about 3.84 percent and that for healthcare is about 2.76 percent. This seems like a significant boost in absolute terms, but it pales in comparison when seen in light of the overall GDP growth of 6.75 percent. Considering the fact that India lags on these social parameters, this historical trend in Indian budgets need to come to an end.

As for taxes, the corporate sector, which was expecting a tax cut on commensurate lines as that of the US economy, was partly obliged. Corporate tax for all companies with a turnover of Rs 250 crores or less was reduced to 25 per cent. This proved to be a major disappointment to large firms whichwill still be taxed at 30 per cent. However, it was understandable on the government’s part as the revenue forgone would have been an astounding Rs 20,000 crores had the tax reduction been done for all firms alike.

On a related note, a significant miss by the Budget has been on the investment front. Over the last six years, the investment across the country has been on a declining trend falling to 29 percent as per last CSO estimates. No major announcement was made to reverse this trend expect indirect measures like higher infrastructure allocation, which might be expected to crowd in private investment. However, considering the fact that investment has seen a structural decline over the last few years a lot could have been done to revive investment sentiments. This is also important because the question of jobs is largely dependent on the economy’s investment appetite.

Finally, the much-awaited question about the fiscal deficit was answered and the government did eventually breach the target of 3.2 percent in 2017-18. The revised estimate of the fiscal deficit in the current financial year stands at 3.5 percent while the projection for next year has been kept at 3.3 percent. The NK Singh Committee had allowed a leeway of 0.5 percent in case of unforeseen events and the government has managed to stay within it. The government also accepted its recommendation to maintain the debt-to-GDP ratio at 40 percent. It is commendable that the government has not given in to the temptation of reaping short-term political gains by disregarding the recommendations of the fiscal committee.The commitment would bode well with credit rating agencies and the economy in general.

Therefore, the Budget paints a promising picture of a government that saw it fit not to resort to populist ploys even after it received an election scare not long ago. Even though a lot was left wanting, especially on the investment front, the Budget managed to address quite a few economic challenges that India faces. By targeting the rural economy and the poor, it can be said that it was a Budget for the masses.

The article was published with Economic Times, Financial Express and BTVi.in on February 1, 2018.