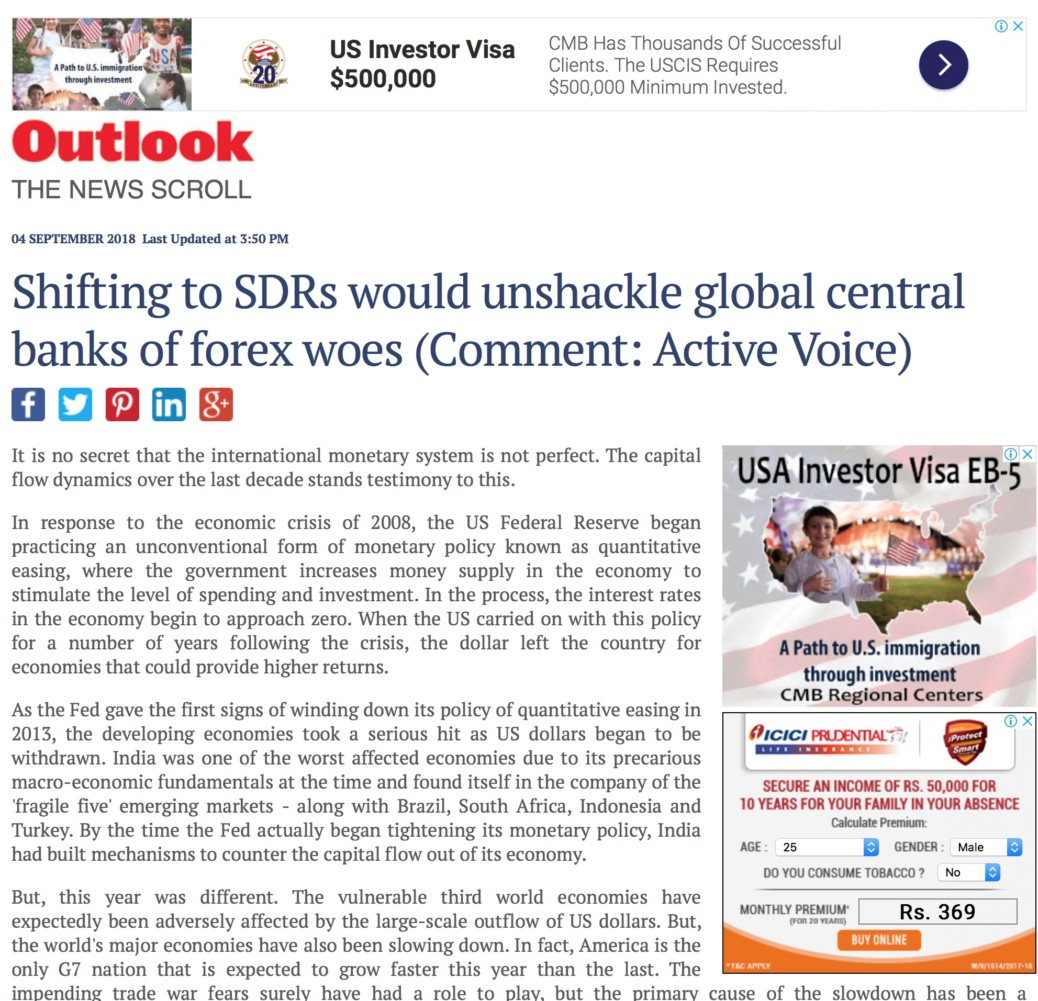 It is no secret that the international monetary system is not perfect. The capital flow dynamics over the last decade stand testimony to the fact. In response to the economic crisis of 2008 the US Federal Reserve began practicing an unconventional form of monetary policy known as quantitative easing, where the government increases money supply in the economy to stimulate the level of spending and investment. In the process, the interest rates in the economy begin to approach zero. When the US carried on with this policy for a number of years following the crisis, the dollar left the country for economies that could provide higher returns.

As the Fed gave the first signs of winding down its policy of quantitative easing in 2013, the developing economies took a serious hit as the US dollars began to be withdrawn. India was one of the worst affected economies due to its precarious macroeconomic fundamentals at the time and found itself in the company of the ‘fragile five’ emerging markets – along with Brazil, South Africa, Indonesia and Turkey. By the time the Fed actually began tightening its monetary policy, India had built mechanisms to counter the capital flow out of its economy.

But, this year was different. The vulnerable third world economies have expectedly been adversely affected by the large-scale outflow of US dollars. But, the world’s major economies have also been slowing down. In fact, America isthe only G7 nation that is expected to grow faster this year than the last. The impending trade war fears surely have had a role to play, but the primary cause of the slowdown has been a strengthening dollar. The dependency of the global economic order on the whims and fancies of the US central bank is certainly a concerning aspect of the international monetary order. A fundamental reform is in order.

The problem lies with the US dollar being the world’s primary reserve currency. The currency is, therefore, used to settle international transactions. If India has to import oil from Iraq, the transaction is not done using the Indian rupee or the Iraqi diner, but in US dollars. The use of the American dollar as the prime intermediary currency becomes problematic because other countries have no say in the policy choices that affect it.

The world is practically functioning like the Eurozone with all its flaws. The rude reality of the European monetary union is that the countries which are a part of it run independent domestic fiscal policies but have no say in the monetary policy. The latter is run by the eurozone’s central financial authorities, where Germany plays a dominant role. The other countries have to merely accept whatever happens with the euro; exactly like how the world economies have to take the trends of the US dollar as given.

The dominance of the US dollar has its origins in the Bretton Woods system adopted after the Second World War. At the time, John Meynard Keynes had proposed a global currency, known as Bancor, but the idea never caught on. The closest alternative to the US dollar is the “special drawing rights” (SDR) issued by the IMF, which is an aggregation of the five major currencies of the world. The largest such issue came in response of the 2008 crisis in response to the collapse of the international private lending system. A push for wider acceptance of the SDR can be a possible way forward to reduce the global vulnerability towards the dollar.

A game theoretic approach shows that it is beneficial for the world to use SDR as the global currency. If the home country and the rest of the world are taken as two players in the model, they will have two choices of using the SDR as the global currency or maintaining a status quo. A quick back-of-the-envelope calculation shows that the Nash equilibrium of the game will lie in a situation where both parties transact in SDR (where the payoffs in both parties choosing SDR is assumed to be 1 and maintaining status quo is 0 as there exists less exchange rate volatility in the former case while choosing a contradictory strategy results in a negative payoff for the home country as it loses out on trade).

It behoves upon an influential body of international cooperation like the G20 to push forward the agenda of a more stable financial order. A higher use of SDR to finance lending by the IMF is a possible measure to increase its usage and acceptance. The success of such a shift would free the global central banks from accumulating foreign reserves and allow for more independence in their monetary policy goals.Most importantly, it will ensure greater stability and faster sustained growth in the world economy.

The article was published with Outlook India, Business Standard , on September 4, 2018.