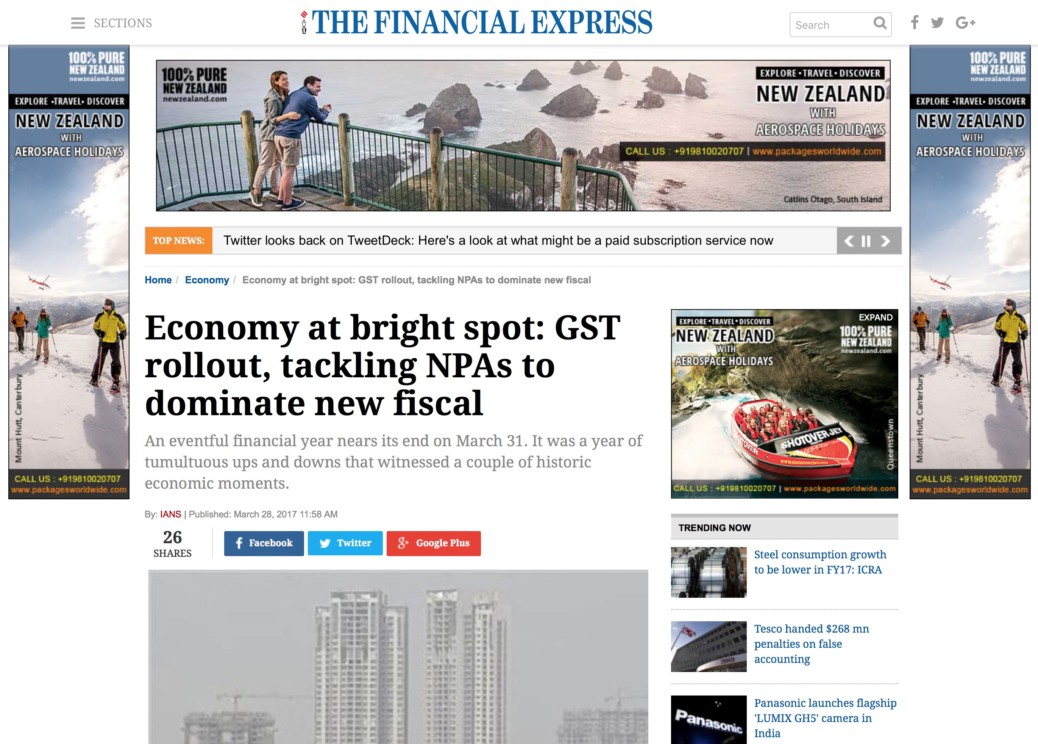 An eventful financial year nears its end on March 31. It was a year of tumultuous ups and downs that witnessed a couple of historic economic moments. The year began with a hopeful resolution of the Greek financial crisis followed by a shocking exit of Britain from the European Union (EU). Post-Brexit, the EU’s future was put in doubt and the world braced for its aftershocks. However, the fears did not materialise in terms of any economic upsets and it was business as usual almost immediately.

Meanwhile, amidst an uncertain global economic environment, the Indian economy was considered to be a “bright spot” until the government threw a spanner in the works on November 8, 2016, with its demonetisation gamble. Again, ominous predictions about its effects on the economy proved modest at best, as far as official figures are concerned.

The Index of Industrial Production (IIP), which measures the country’s factory output, grew at 2.7 percent in January after contracting by 0.1 percent in December. By now, most of the demonetisation-induced sluggishness has worn off in almost all sectors and even consumer demand is showing signs of revival as evidenced by an increase in imports in latest figures.

However, as the world and Indian economy put their fears of Brexit and demonetisation-induced after-effects to rest, there are two problems the latter has not been able to allay during this financial year. One is the issue of reviving private sentiment. When the current financial year began, calls were loud for the RBI to slash rates as its hawkish stance was seen as inimical to investment in the country.

When the central bank obliged, it proved to be insufficient to unleash the animal spirits.

According to estimates of business information company CMIE (Centre for Monitoring Indian Economy), projects worth Rs 777 billion ($12 billion) were stalled in the October-December quarter, which is 38 per cent higher than the previous quarter and 10 per cent higher than the average value of projects getting stalled midway through their implementation last year. Stalled projects as a percentage of total projects have been consistently on the rise since the quarter ending in June 2015, except for one quarter in between (March-June 2016).

The second issue, and in fact the root cause of subdued investment sentiments throughout the country, is the problem of stressed assets. The magnitude of stressed loans with banks has been consistently on the rise this year. The gross non-performing assets (NPAs) ratio of scheduled commercial banks increased to 9.1 percent in September 2016 compared to 7.8 percent in March 2016, pushing the overall stressed asset ratio up to 12.3 percent from 11.5 percent.

According to the RBI, the Rs 700,000- crore NPA problem has made banks risk-averse and credit-shy, which has hurt the investment process in the last few years.

On the issue of NPA, the government has been sending out positive signals of an upcoming action plan on its resolution. A push to resolve the big NPA cases on an individual basis is on the cards. This is confined to around 50 companies, according to Finance Minister Arun Jaitley, and should resolve a significant proportion of the problem. A holistic action plan to deal with other accounts, which will probably be revealed soon, should begin the next financial year on a hopeful note. An effective solution to tackle the problem of stressed loans will dispel the ghost of subdued investment that has been the government’s Achilles’ heel since it came to power.

Another boost to private investment should also arise from the implementation of the much-awaited Goods and Services Tax (GST), which is expected to meet its July 1 deadline. There are several ways through which this might happen. One, as taxes will be lower for products like essential goods, their prices will fall and if manufacturers pass on their gains, demand will see an uptick. This should encourage higher private investment within these sectors. Second, the GST’s self-monitoring mechanism will make evasion difficult. So, in the long run, this will broaden the tax base, increase revenue and, hopefully, lower tax rates.

Another unforeseen factor that should boost private investment is the performance of the BJP in assembly elections in the states. The same government at the Centre and the states will inspire a sense of confidence among investors in the political stability of the country. Since the party has always signalled its intent on encouraging investment and easing the business environment across the country, investor sentiment should receive a positive fillip.

A confluence of factors — attacking the NPAs and implementing the GST to political stability — makes the next financial year a hopeful one. The government only needs to make sure that its NPA resolution is an effective one and GST is brought in with as few glitches as possible.

The article was published in Economic Times, Financial Express, The Quint and Business Standard on March 28, 2017.