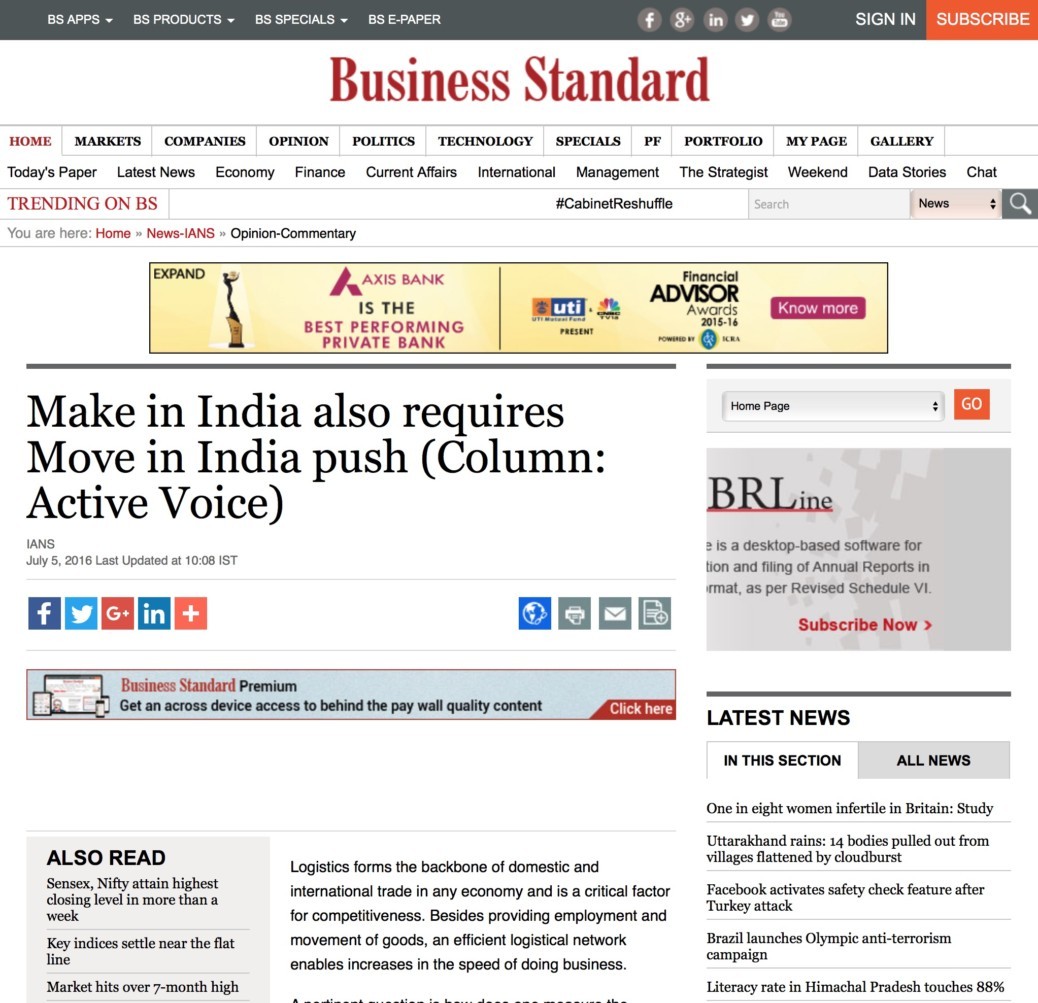 Logistics forms the backbone of domestic and international trade in any economy and is a critical factor for competitiveness. Besides providing employment and movement of goods, an efficient logistical network enables increases in the speed of doing business.

A pertinent question is how does one measure the logistics performance of a country and compare it with that of other economies? A recent biannual report of the World Bank throws light on this. However, it must be noted that the performance on Logistics Performance Index (LPI) is a measure of performance on international supply chains and does not capture the reality within a domestic setting. For that, the domestic LPI scores are done in the same ‘Connecting to Compete 2016’ report.

The international LPI is based on an assessment of performance along six key indicators — some on the input side and the others on the outcome side of the supply chain service delivery. These pertain to border control agencies, infrastructure and services quality on the input side. On the outcome side are competitively-priced international shipments, tracking and tracing and timeliness.

The data is based on feedback from logistics professionals on the ground.

In the present edition of the index, India’s performance is by far the best since 2007, with the country improving to 35. In 2014, India was ranked 54 and so the jump this time around is a tremendous 19 ranks. With this, India is one of the best-performing economies relative to the average income level of its people.

So far the World Bank has put out five editions of the report since its inception in 2007 with the most recently being released in June 2016. There are three interesting insights from the report and associated data sets that merit attention.

First, it is interesting to note that the top 10 ranks on the index are occupied by the high-income economies and BRICS economies see huge dispersion in ranks and scores. Germany has emerged as the best country with an LPI score of 4.23 and Luxembourg is second with 4.22.

An interesting measure, which is the percentage of the highest performer, is also mentioned. India, which has a score of 3.42, is thus performing at a level of roughly three fourth’s of Germany’s. Within the BRICS economies, India is placed below South Africa (20) and China (27), while it is placed above Brazil (55) and Russia (99).

Third, the domestic LPI offers rich insights on how a country is perceived by its logistics providers. This has two key dimensions namely — environment and institutions and performance. In the first aspect, an astounding 63 per cent of respondents feel port charges are high in India. Similarly, on the quality of infrastructure, a massive 60 per cent feel roads are low quality/very low quality in India. For sources of delays, maritime transshipment is seen by 36 per cent of the respondents as a major cause of delays.

On the performance aspect, India needs to improve its performance on the percentage of shipments meeting quality criteria, which is at 68.7 per cent. These responses clearly lay out areas where governments at the central and state levels have to improve over the long term.

In the years ahead, India should aim to improve performance along key dimensions on the international as well as domestic LPI, where it is relatively a laggard. These include focusing on the timeliness of shipments and on removing infrastructural bottlenecks and improving the quality of infrastructure. It has done well on this year’s Index owing to the commitment to improve connectivity with the world. Hopefully in the years ahead, along with focusing on Make in India there is also a commitment to Move in India.

Published in Business Standard on July 5, 2016. To know more