Economic Issues Will Have a Decisive Say in 2019 General Elections 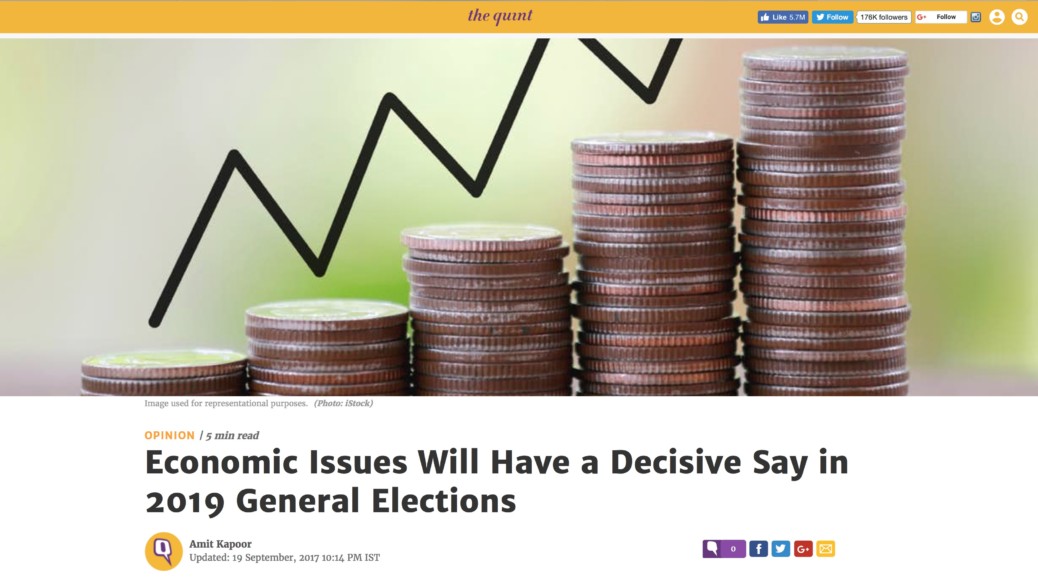 It is becoming really hard to be optimistic about the Indian economy. As TN Ninan pointed out last week, it has been six years since our economy breached the seven percent growth rate mark. There have been repeated forecasts in these last six years hopeful of regaining those glory days of 2003-11, when India managed to grow at an annual rate of 8.4 percent. But in every quarter, there existed a convenient transitory phenomenon to explain away the poor growth statistics. Initially, it was the sluggish world economy with a couple of drought years in between and off late it has been the after effects of demonetisation and the hastily implemented goods and services tax (GST).

Whatever the reasons, the number that have been emerging in the last two weeks are quite damning for the short-term prospects of the economy. In Q1 of 2017-18, GDP grew at 5.7 percent making it the fifth consecutive quarter in which growth rates have fallen. The country’s industrial activity as measured by the Index of Industrial Activity (IIP) has merely expanded by 1.7 percent between April and July as against 6.5 percent over the same period last year. The weakness on the industrial front is undeniable.

Inflation figures have also not been promising. Contrary to the warnings a few months ago of a deflationary trend across the economy, the Consumer Price Index (CPI) grew by 3.36 percent in August after rising by 2.36 percent in July. Therefore, after three months of a fall in inflation numbers before July, the prices are back to their usual trend of moving northward. This eliminates all possibility of RBI making any further rate cuts in its next policy review. So, the monetary route of giving the economy a boost is all but closed.

Anyhow, the problems of the economy are such that they cannot be merely addressed through the monetary route. There are four engines that usually drive growth in an economy and currently all are sputtering on fumes. These are: private investment, private consumption, exports and government expenditure.

Private investment has taken the worst hit over the last few years, especially since the problem of bad loans with banks started spiralling out of control. Gross fixed capital formation as a percentage of GDP has consistently fallen from its peak of 34.31 percent in 2011-12 to 29.55 in 2015-16. Since banks are wary to lend out fresh loans on account of rising non-performing assets (NPAs) with them, these figures are not expected to see any upturn any time soon.

To add to the misery, private consumption trends are also not helping. Growth of private consumption has been merely 6.7 percent this quarter over Q1 of last year – a six quarter low. This just might be a short-term blip as people might have postponed spending due the implementation of GST, but being complacent and waiting for consumption to pick up is obviously not the best way forward.

Exports, which had been the leading driver in India’s “beyond-seven” growth years, growing at rates of 20 percent and 16 percent in 2009-10 and 2010-11 respectively have fallen to single digit growth rates since. In fact, in 2014-15 exports fell by 5.3 percent. However, recent reports show that it has grown by a little over 10 percent over the last year. However, as Swaminathan Aiyer pointed out recently, it will still not suffice for India’s growth aspirations as no country has achieved a growth rate of over 7 percent or more unless its exports had grown over 15 percent annually.

Finally, and most important of all government expenditure, which has been the saving grace until now seems to be running out of steam. Government spending has grown sharply since the first quarter of last year and has even increased by double digits post-demonetisation peaking at around 17 percent last quarter. This has been a major factor in propping up whatever little growth the economy has witnessed. However, in the process the government had already exhausted 92.4 percent of its annual target of fiscal deficit. To meet the 3.2 percent target, it will be forced to cut expenditure. Therefore, the fiscal route of reviving the economy also seems to be closing along with the monetary one unless the government decides to breach the fiscal target, which will damage its hard-earned credibility and is ill-advised.

So, what can the government do to move closer to the oft-promised seven percent growth reality? It is clear that the problem is not transitory. It seems more structural in nature and needs a structural solution. The problem of NPAs cannot be over-emphasised. Bad loans have become the Achilles’ heel for the government that it has been unable to remedy. Private investment has been held up because of it and it is undeniably a vital driver of economic growth. Government investment alone cannot push higher growth as is slowly becoming evident.

Therefore, recapitalisation of banks should be the topmost priority on the government’s agenda and it should brainstorm ways of doing so. Disinvestments can be a source of revenue for the same and since the stock markets are on a high, it just might be a viable option. There are no easy answers on the best way to revive the economy, but whichever path the government chooses will have a lot of say in determining the future of the Indian economy and the magnitude of an even bigger problem which hardly anyone is discussing yet: that of growing unemployment. More importantly, for the government, all of these cumulative issues will have a lot of say in determining the 2019 election outcomes. One can only hope for the best.

The article was published with The Quint and Business Standard on September 19, 2017.