Key to reviving Punjab lies in revitalising its once industrial cities 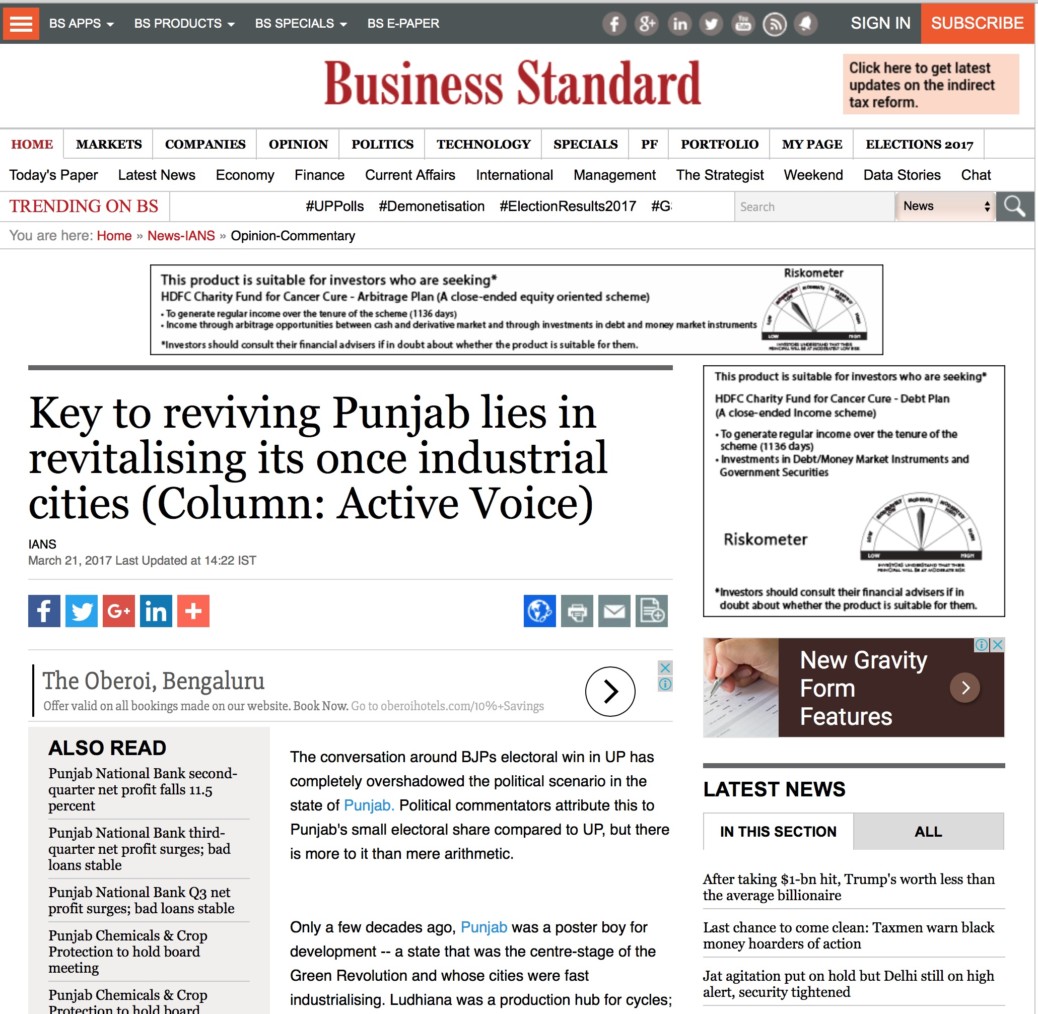 The conversation around BJPs electoral win in UP has completely overshadowed the political scenario in the state of Punjab. Political commentators attribute this to Punjab’s small electoral share compared to UP, but there is more to it than mere arithmetic.

Only a few decades ago, Punjab was a poster boy for development — a state that was the centre-stage of the Green Revolution and whose cities were fast industrialising. Ludhiana was a production hub for cycles; Jalandhar had a thriving sports goods industry and Amritsar had its textile industry. Punjab’s economic size made it hard to be side-lined.

Now, the state and its cities have fallen into Detroit-like insignificance. Industries have chosen to exit the state. Between 2007 and 2014, about 18,770 factories have closed down. As a result, employment and economic growth have fallen below the national average. Moreover, the rising menace of drugs has added to the woes.

The strong anti-incumbency shown in the recent elections reflects the desire for change among the people of Punjab and, hopefully, the Amarinder Singh-led government will live up to the expectation of the electorate. Reviving the state needs to begin at the level of its cities as they have the potential to become engines of growth and prosperity. Since industrial clusters across the cities of Punjab were a driving force behind Punjab’s erstwhile growth, it should be instructive to delve into the reasons for their decline.

The second reason is the loss of competitive advantage to Punjab’s neighbouring states. Tax structures are more attractive in Himachal Pradesh. The state has been offering a tax holiday to industries since 2003 along with other sops. Also, industrial power is much more abundantly available and considerably cheaper in Himachal Pradesh.

Third is the flawed economic policies followed by the state leadership. Punjab’s agricultural sector is riddled with controls and huge subsidies, which makes the state’s fiscal situation highly unmanageable. The state provides free electricity to its farmers. To compensate for this subsidy, arcane duties and cesses are imposed on electricity provided to industries. This makes operations unreasonably expensive.

Another flawed economic policy focus was seen in the recent efforts of the previous government to attract investment into the state. A slew of incentives was announced to attract new big-ticket investors. This was done without providing any support to existing small and medium enterprises (SMEs) that have been failing over the years, owing to continuous exits of big companies around which they have developed. SMEs account for more than 80 percent of the total companies in cities like Ludhiana. Therefore, even though attracting large enterprises is well-intentioned, ignoring a bulk of the state’s industry points to an ill-informed policy structure.

The newly-elected Congress government needs to reverse all these policy errors to revive Punjab’s growth story. Since agriculture is no longer the mainstay of its economy, the best approach that the incoming government can take is to revive the state’s basic units of economic power: its cities. Reviving the industrial clusters that once thrived in the cities of Punjab is its best bet in a failing economy.

Cities can only succeed by attracting talent and talent, in turn, seeks out good places to consume as well as produce. Cities in Punjab have been losing both of these characteristics over the years. A state that was once the most prosperous in the country, now lags behind Haryana, Gujarat, Maharashtra, and Telangana, while being just at par with Himachal Pradesh. Talent will clearly not seek out a place that is in perpetual decline and nor will companies do so. Therefore, for a city to succeed it needs to provide a decent quality of living to attract talent and a business-friendly environment to lure opportunities for the inhabitants.

However, Punjab would also need to develop talent among its population, which it has lost out over time. To do so, the government needs to balance its books and reduce its fiscal burden by cutting down on its subsidy bill. The resources it gains from this needs to be devoted to talent-building sectors like education and health. Second, it needs to remedy its flawed economic policies that have been making business unviable in the state. These are the two most crucial factors that require urgent redressal to revive Punjab. The Congress government could very well use the faith reposed upon it by the people of the state as a path to its salvation.

The article was published in Business Standard on March 22, 2017.