‘Make in India’ can lead to ‘Decade of Manufacturing’

Home ‘Make in India’ can lead to ‘Decade of Manufacturing’ 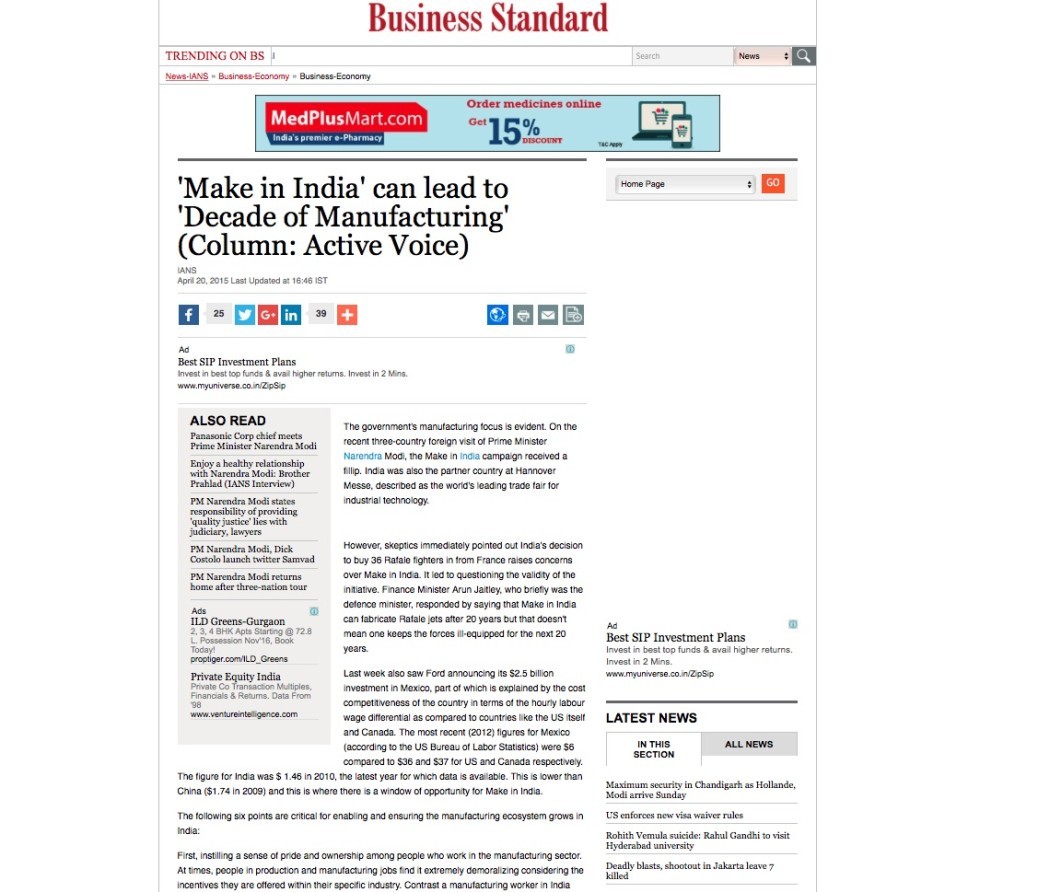 ‘Make in India’ can lead to ‘Decade of Manufacturing’

The government’s manufacturing focus is evident. On the recent three-country foreign visit of Prime Minister Narendra Modi, the Make in India campaign received a fillip. India was also the partner country at Hannover Messe, described as the world’s leading trade fair for industrial technology.

However, skeptics immediately pointed out India’s decision to buy 36 Rafale fighters in from France raises concerns over Make in India. It led to questioning the validity of the initiative. Finance Minister Arun Jaitley, who briefly was the defence minister, responded by saying that Make in India can fabricate Rafale jets after 20 years but that doesn’t mean one keeps the forces ill-equipped for the next 20 years.

Last week also saw Ford announcing its $2.5 billion investment in Mexico, part of which is explained by the cost competitiveness of the country in terms of the hourly labour wage differential as compared to countries like the US itself and Canada. The most recent (2012) figures for Mexico (according to the US Bureau of Labor Statistics) were $6 compared to $36 and $37 for US and Canada respectively. The figure for India was $ 1.46 in 2010, the latest year for which data is available. This is lower than China ($1.74 in 2009) and this is where there is a window of opportunity for Make in India.

The following six points are critical for enabling and ensuring the manufacturing ecosystem grows in India:

First, instilling a sense of pride and ownership among people who work in the manufacturing sector. At times, people in production and manufacturing jobs find it extremely demoralizing considering the incentives they are offered within their specific industry. Contrast a manufacturing worker in India with one outside of India or with a service worker. Even people doing very basic production outside of India are motivated and their morale is high. It is true for Indian services industry as well. In India, there is a high attrition rate in manufacturing and people want to move to greener pastures as job satisfaction is often missing. It is true for even formal factory sector and not just the informal clusters where there are a large number of contractual workers. If a proper sense of pride is instilled, it often leads to quality and standards being followed that can make industries export competitive.

Secondly, closely related to the issue of incentives and remuneration is the issue of skills. India has a lot of competition but a large fraction of the workforce is semiskilled/ unskilled. It is urgently required to rectify the mismatch between the jobs that are on offer and the education one receives. It will enable recent graduates to start post-college immediately and the need for probation and training will be greatly reduced.

Thirdly, at some places, there are inverted duty structures. The government has already addressed these for the renewable sector in the budget. Roughly speaking inverted duty structures mean that the cost of procuring finished goods is cheaper than the cost of procuring raw materials. It gives a perverse incentive to procure from outside rather than Make in India. Needless to say that if the concept is to be made a success, the import duty structure needs to be carefully studied and accordingly recalibrated.

Fourthly, there is a need to look at regulation by the government. It means looking into labour laws and indirect tax regime, as well as the general ease of doing business. The government seems to be headed in the right direction through simplification and better legislation. The labour laws need to be simplified and brought under a single unified ambit. This will benefit all the stakeholders – industry, labour (most of whom are in the informal sector thanks to the archaic labour laws) and even law enforcers. The goods and services tax (GST) could give a much-needed boost to the economy and at the same time increase the speed of business activity. Te measures for ease of doing business include a reduction in the time to open and run a business as well as procuring licenses for starting production and compliance with regulations.

Fifthly, branding and marketing of products from India is not directly related to manufacturing but greatly enhances the export value if done in a proper process-driven manner. The Hannover Messe is a recent case in point. Also, there is need to relook the cluster approach within the country for gaining competitiveness as clusters are the backbone of an industrial economy and are fundamental drivers of competitiveness.

Lastly, improvement in terms of basic infrastructure over the medium- and long-term will again be instrumental in increasing the speed of doing business. Bettering the connectivity with ports, improvements in our archaic railway network, expansion of highways, as well as better power supply, will all aid in turning Make in India into a grand success.

A word of caution: UPA-1 too had tried to revamp manufacturing landscape when the National Manufacturing Competitiveness Council (NMCC) put out a national strategy for manufacturing in March 2006. Knowing what to do and doing it are two different things. The necessary changes can lead to a truly a ‘Decade of Manufacturing’ for India.

Published in Business Standard on April 20, 2015. To know more