Farmer Suicide: The challenge of disparity in India

Home Farmer Suicide: The challenge of disparity in India 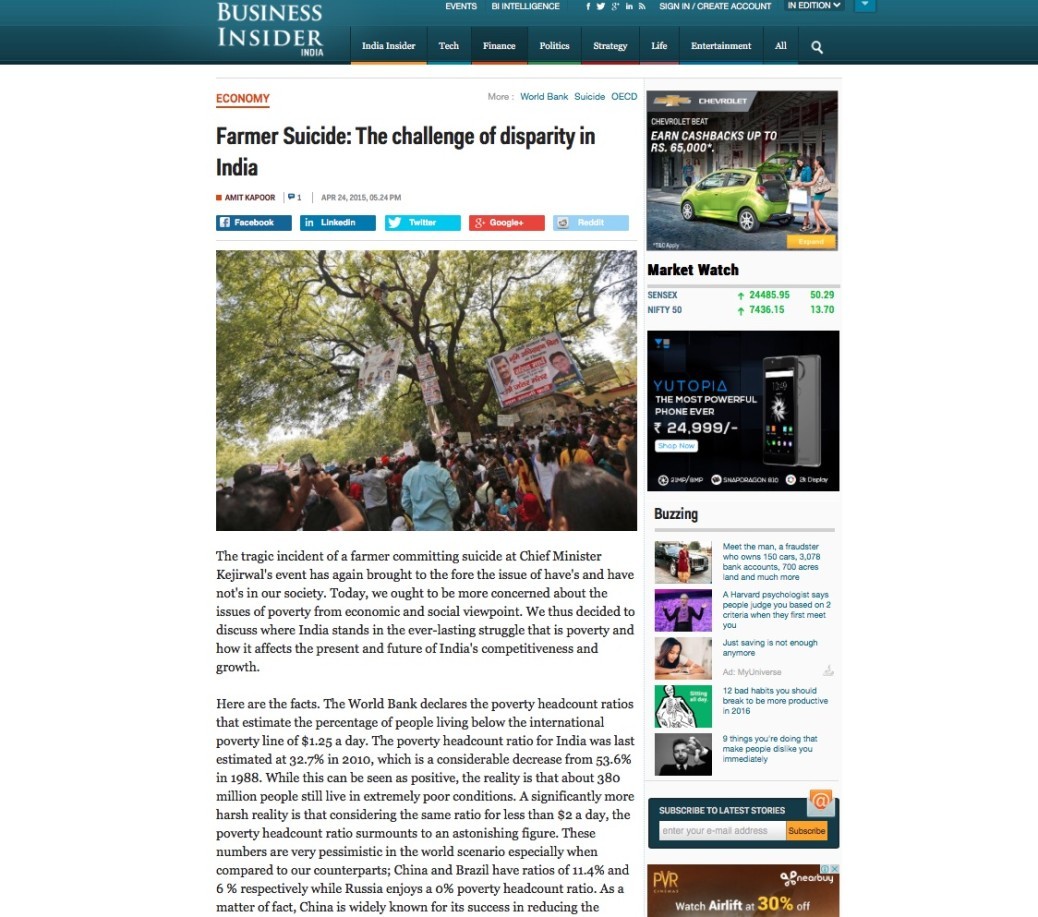 Farmer Suicide: The challenge of disparity in India

The tragic incident of a farmer committing suicide at Chief Minister Kejirwal’s event has again brought to the fore the issue of have’s and have not’s in our society. Today, we ought to be more concerned about the issues of poverty from economic and social viewpoint. We thus decided to discuss where India stands in the ever-lasting struggle that is poverty and how it affects the present and future of India’s competitiveness and growth.

Here are the facts. The World Bank declares the poverty headcount ratios that estimate the percentage of people living below the international poverty line of $1.25 a day. The poverty headcount ratio for India was last estimated at 32.7% in 2010, which is a considerable decrease from 53.6% in 1988. While this can be seen as positive, the reality is that about 380 million people still live in extremely poor conditions. A significantly more harsh reality is that considering the same ratio for less than $2 a day, the poverty headcount ratio surmounts to an astonishing figure. These numbers are very pessimistic in the world scenario especially when compared to our counterparts; China and Brazil have ratios of 11.4% and 6 % respectively while Russia enjoys a 0% poverty headcount ratio. As a matter of fact, China is widely known for its success in reducing the proportion of its people living under poverty by more than 60% in the past three decades.

A popular solution to alleviate poverty is high growth rates for the economy. However, economists argue that rapid growth could also lead to more unfavorable consequences such as income disparity. The Kuznets curve depicts the path followed by countries where as income per capita increases, disparity first increases to reach a peak and then starts falling, forming a bell-shaped curve. The increase in income disparity implies an inequitable distribution of growth benefits among the different strata of society. It could also potentially lead to greater social and political risks across the country. This inequality can be seen in the current distribution of wealth in India. At present, there are 7895 UHNW (Ultra High Net Worth) individuals in the country whose wealth is almost equivalent to half the GDP of India in 2012. Their per capita income is 80,000 times the per capita level of GDP of India. On the other hand, nearly 60% of the population survives on less than $2 a day. This is all evident of the presence of extreme disparity between rich and the poor. In fact, an even stronger increase in income disparity can be observed in the urban regions of Delhi, Uttar Pradesh, and Karnataka over the past few years. This can be attributed to large number of workers that migrate every year from rural regions to urban areas like Delhi in search of employment.

Some capitalists might opine that income disparity is simply a social issue and has no impact on the economy of a country. The organization of economic co-operation and development (OECD) recently released a report that contradicts this vastly. As per the report, OECD member nations are witnessing a decrease in economic growth that can be directly attributed to increase in income disparity within the nations’ populations. It demonstrates how the lower 40% of income earners can alone drive a change in the economic growth of a country. The reasoning behind is that these segments are unable to invest in high-value services like education and healthcare due to lack of dispensable income and resources. This in turn hampers the mid-term economic growth of a country. In a country like India, where about a quarter of the population still remains illiterate, further income disparity could lead to a significant crisis. Most rural families still have large qualms about the importance of education, especially for the girl child, and declining incomes would only worsen the situation at hand. Therefore, if the disparity were to deepen, India’s future of a skilled demographic dividend would surely be questionable.

To truly alleviate poverty, focus is thus required on both economic growth and income distribution. This calls for an “inclusive approach” that ensures an equitable distribution of gains especially to those who lack the basic amenities and freedom. The government has to come up with frameworks and policies that can readjust the disparity in wealth and promote sustainable development for all. The current government under Modi has already laid plans to eliminate poverty and is primarily focusing on boosting agribusiness and healthcare as means to empower the poor man. However, a true boost to this movement can only occur if the Indian businesses also realize this urgent need and work towards gains for not only their corporations but also the society. The new and existing companies must alter their business models and implement sustainable measures to include the underprivileged and promote inclusive growth. Poverty has been a pivotal handicap for this nation, and will always remain as one, unless a united front is made to curb it.

Published in Business Insider on April 24, 2015. To know more