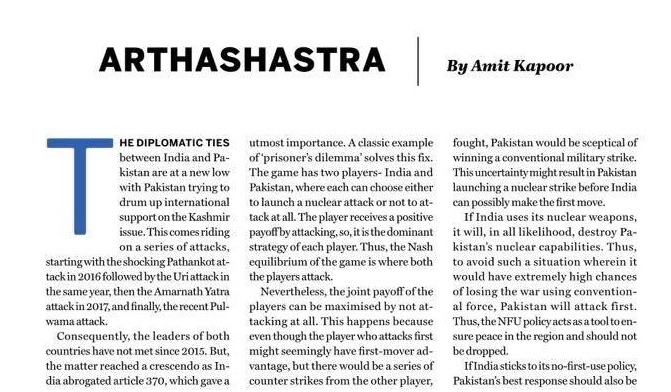 The diplomatic ties between India and Pakistan are at a new low with Pakistan trying to drum up international support on the Kashmir issue. This comes riding on a series of attacks, starting with the shocking Pathankot attack in 2016 followed by the Uri attack in the same year, then the Amarnath Yatra attack in 2017, and finally, the recent Pulwama attack. Consequently, the leaders of both countries have not met since 2015. But, the matter reached a crescendo as India abrogated article 370, which gave a special status to Jammu and Kashmir.

Though the matter is a domestic one for India yet, Pakistan has made numerous efforts to internationalize it. Failing to garner much of attention over its appeal for wider international involvement, Pakistan has hinted towards a nuclear war. But India must abstain from any such escalation as the gains from peace are much higher than returns from any aggressive move. In this regard, reconsidering India’s no-first-use (NFU) policy on nuclear weapons is a problematic idea. A game-theoretic approach can provide a better viewpoint.

The question of whether India should revoke its no first use policy or not is of utmost importance. A classic example of “Prisoner’s dilemma” solves this fix. The game has two players- India and Pakistan, where each can choose either to launch a nuclear attack or not to attack at all. The player receives a positive payoff by attacking, so, it is the dominant strategy of each player. Thus, the Nash equilibrium of the game is where both the players attack.

Nevertheless, the joint payoff of the players can be maximized by not attacking at all. This happens because even though the player who attacks first might seemingly have first-mover advantage, but there would be a series of counter strikes from the other player, and eventually both will land up hurting themselves and receive negative payoffs. Thus, it will be in the best interest of both the players to cooperate and resort to no-attack. Hence, the NFU doctrine acts as an assurance for Pakistan that India will not attack first and allows it to choose the strategy of not attacking.

On the contrary, if India abandons the policy, then it brings an element of uncertainty into the game. In such a situation, if ties between the countries deteriorate next time, Pakistan would be unsure of India’s actions. Given the history of wars that both the countries have fought, Pakistan would be skeptical of winning a conventional military strike.

This uncertainty might result in Pakistan launching a nuclear strike before India can possibly make the first move. If India uses its nuclear weapons, it will, in all likelihood, destroy Pakistan’s nuclear capabilities. Thus, to avoid such a situation wherein it would have extremely high chances of losing the war using conventional force, Pakistan will attack first.

Thus the NFU policy acts as a tool to ensure peace in the region and should not be dropped. If India sticks to its no-first-use policy, Pakistan’s best response should also be not to attack. This is because if Pakistan still decides to attack, it will be completely aware of the repercussions that would follow. The scale of destruction, as well as the fear of social boycott, both will play a role in deciding Pakistan’s action. Thus, this game-theoretic model asserts how the NFU policy ensures that the countries do not gravitate towards the Nash equilibrium where both countries attack each other and instead stick to a Pareto superior condition of not attacking. Thus, calmer heads should prevail in such times instead of a needless engagement in a futile standoff.

The article was published with Business World in the issue dated October 12 to October 25, 2019.