States must be brought on board for visionary e-NAM initiative 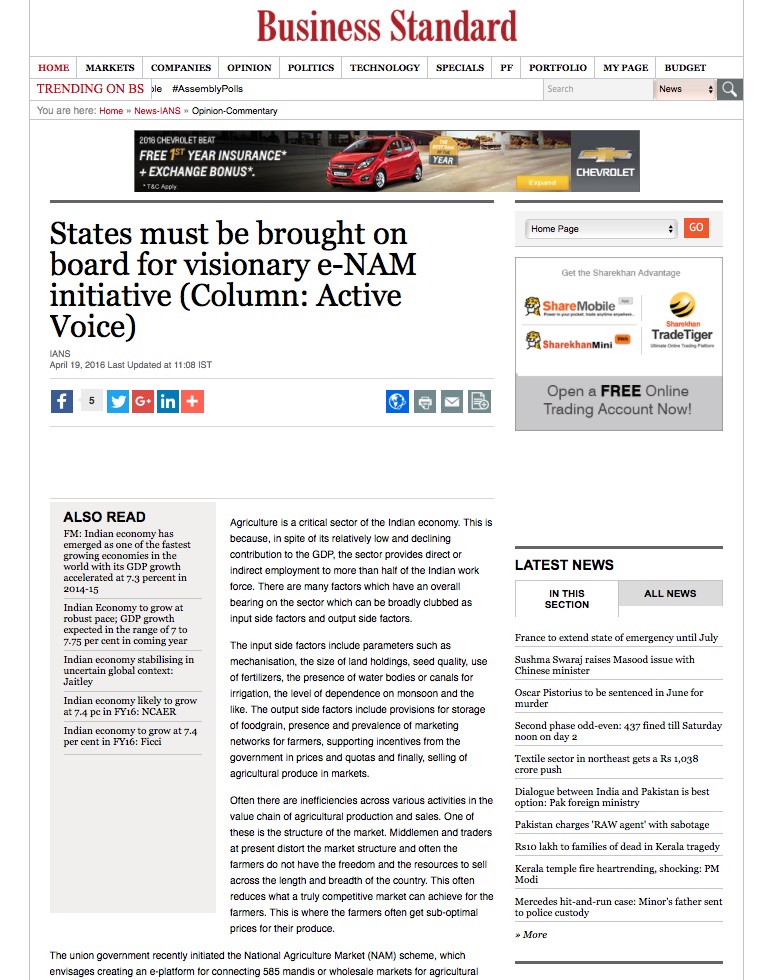 Agriculture is a critical sector of the Indian economy. This is because, in spite of its relatively low and declining contribution to the GDP, the sector provides direct or indirect employment to more than half of the Indian work force. There are many factors which have an overall bearing on the sector which can be broadly clubbed as input side factors and output side factors.

The input side factors include parameters such as mechanisation, the size of land holdings, seed quality, use of fertilizers, the presence of water bodies or canals for irrigation, the level of dependence on monsoon and the like. The output side factors include provisions for storage of foodgrain, presence and prevalence of marketing networks for farmers, supporting incentives from the government in prices and quotas and finally, selling of agricultural produce in markets.

Often there are inefficiencies across various activities in the value chain of agricultural production and sales. One of these is the structure of the market. Middlemen and traders at present distort the market structure and often the farmers do not have the freedom and the resources to sell across the length and breadth of the country. This often reduces what a truly competitive market can achieve for the farmers. This is where the farmers often get sub-optimal prices for their produce.

The union government recently initiated the National Agriculture Market (NAM) scheme, which envisages creating an e-platform for connecting 585 mandis or wholesale markets for agricultural produce across the length and breadth of the country.

At the initial stage, the scheme envisages implementation of NAM by the Department of Agriculture & Cooperation (DAC) through the Small Farmers Agribusiness Consortium (SFAC) by creating a common electronic platform deployable in selected regulated markets across the country.

The DAC’s role is ascertained and will meet expenses on software and its customization for the states and union territories and provide it free of cost to them. The DAC is also to give a grant as a one-time fixed cost subject to the ceiling of Rs.30 lakh per mandi (not for private mandis) for related equipment/infrastructure in 585 regulated mandis so as to enable the installation of the e-market platform.

Private mandis can access the e-market platform but will not be provided funds for infrastructure or equipment.

The overall scheme is aimed at expanding the freedom to sell depending on greater price realizations for farmers. Overall the NAM scheme will bring in transparency and align demand and supply and will help farmers get appropriate price depending on the market dynamics in the overall national unified market.

However, there are two or three concerns in the project which will have to be tackled effectively.

These include the fact that the states will have to be taken on board for this. The respective Agricultural Produce Market Committee Acts will have to be amended for enabling the creation of the unified market.

Second, another major concern is that a unified market project of this scale has not been attempted before in India. At best, what India has seen is an operational e-marketing platform in Hubli in Karnataka for e-trading of agricultural produce. Therefore, the need is to tread cautiously and meticulously on how challenges may arise in market functioning.

Finally, there is an issue of coverage which will have to be sorted out as the scheme gathers momentum. Initially, 25 crops will be traded across eight states in 21 mandis. The increase in coverage will help more farmers to avail of the benefits of the platform. The e-NAM will eventually lead to more freedom to sell by farmers to traders across India in a competitive market. The aim of the government to double agricultural incomes by 2022 might just come closer if the functioning of the markets for agricultural commodities can be improved.

Over the next few years, India must try to enable the e-market by taking care of concerns and bringing states on board for this visionary initiative.

Published in Business Standard on April 19, 2016. To know more