What is the state of the BRICS economies? 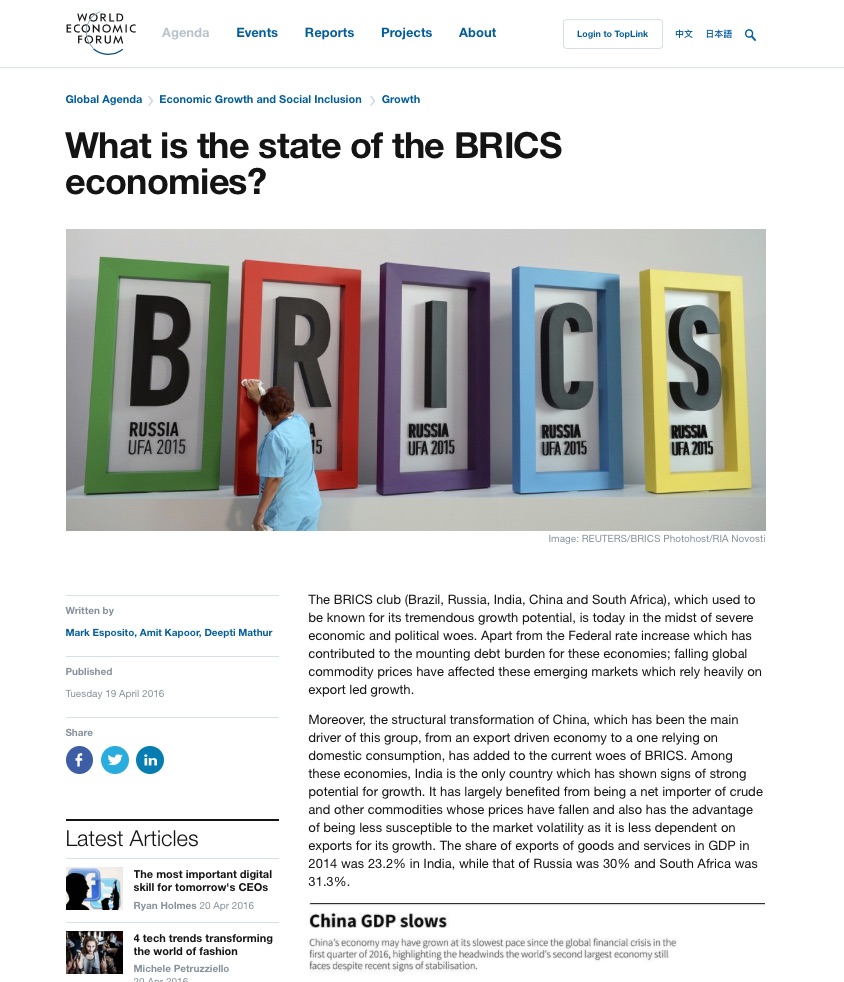 The BRICS club (Brazil, Russia, India, China and South Africa), which used to be known for its tremendous growth potential, is today in the midst of severe economic and political woes. Apart from the Federal rate increase which has contributed to the mounting debt burden for these economies; falling global commodity prices have affected these emerging markets which rely heavily on export led growth.

Moreover, the structural transformation of China, which has been the main driver of this group, from an export driven economy to a one relying on domestic consumption, has added to the current woes of BRICS. Among these economies, India is the only country which has shown signs of strong potential for growth. It has largely benefited from being a net importer of crude and other commodities whose prices have fallen and also has the advantage of being less susceptible to the market volatility as it is less dependent on exports for its growth. The share of exports of goods and services in GDP in 2014 was 23.2% in India, while that of Russia was 30% and South Africa was 31.3%.

India has the lowest per capita GDP of $5,238 among the other members of the bloc and is also lagging behind the other BRICS economies in terms of quality of life. However, economic reforms initiated by the Indian Prime Minister Narendra Modi, have led to greater foreign investments and improved economic competitiveness in recent times. India’s ranking in the World Economic Forum’s, Global Competitiveness Report improved from 71 in 2014 to 55 in 2015. Nevertheless, excluding Brazil, all the other BRICS countries are still ranked higher than India in the report.

In terms of social development, BRICS economies have shown a mixed performance. In the Social Progress Index (SPI) developed by the Social Progress Imperative, a nonprofit organization based in Washington, Brazil (70.89) surpasses all the other member countries, followed by South Africa (65.64), Russia (63.64), China (59.07) and India (53.06).

Meanwhile, Russia outperforms the rest of the economies in terms of Basic Human Needs (Nutrition and basic medical care, Air, water and sanitation, Shelter and Personal safety), Brazil leads the group on Foundations of Wellbeing (Access to basic knowledge, Access to information and communication, Health and wellness, and Ecosystem sustainability) and Opportunity (Personal rights, Access to higher education, Personal freedom and choice and Tolerance and inclusion) dimensions of the SPI. India, which belongs to the group of low social progress countries, falls behind the other BRICS countries in both Basic Human Needs and Foundations of Wellbeing and only stays ahead of China in the Opportunity dimension.

Further assessment of the SPI for the bloc shows that Personal safety has been an area of concern in South Africa and Brazil. The homicide rate, defined as deaths deliberately inflicted on a person by another person, per 100,000 people, is 5 on a scale of 1-5 for both countries. In contrast, China has the lowest homicide rate of 1.

Moreover, the rate of traffic deaths has been observed to be the highest for South Africa, followed by Brazil. Areas such as Water, Sanitation and Shelter have been challenging for India primarily due to lack of access to piped water, improved sanitation facilities, electricity and household air pollution. In addition to this, India has about 15% of its population which is undernourished, as compared to Brazil, Russia and South Africa which have only 5% undernourished people.

Maternal mortality rate and child mortality rates are also very high in India relative to the others in the group. On the front of health and wellness, South Africa has the lowest life expectancy for its population (56.1) and China has the highest (75.2). Another major aspect of a nation’s wellbeing is its environmental sustainability, which could be measured by its amount of greenhouse gas emissions. China, Russia and South Africa have high content of greenhouse gas emissions relative to Brazil and India.

On the dimension of Education, Russia has the highest adult literacy rate of 99.7%, while India lags behind with 71.2%. Moreover, India sees the highest inequality in education among the other BRICS economies. The average number of years of school attended by women between the age group of 25-35 years is as low as 5.6 compared to Russia (13.8) and South Africa (10.4). Another major aspect which is crucial to a nation’s prosperity is Tolerance and inclusion. While, India shows a weak performance on this front compared to other countries, it stays far ahead of China and Russia on personal rights such as political rights, private property rights and the like.

Since social progress of a nation may also affect its economic prosperity, it is crucial for nations to undertake measures in the social spheres in which they are lagging behind. While India still needs to invest its resources in meeting its basic human needs, countries such as China and Russia need to bring about institutional changes that could protect the rights and freedom of its people. The bloc needs to address environmental issues by building energy efficient technologies that could lead to the path of sustainable development. Among the BRICS economies, South Africa, China and Russia should lay greater emphasis on policy dialogues to reduce the extent of their greenhouse gas emissions. In addition to this, South Africa and Brazil should focus on ensuring personal safety to its people. Greater government support through increased spending on social sectors or though policy changes may promote social development and protect the falling BRICS.

A measure in this direction has been taken up by the Brazilian economy through a construction of SPI for its Amazon region, which covers 772 municipalities and nine states. The region has been marked down for social development compared to other regions of Brazil, primarily due to activities such as deforestation, leading to depletion of natural resources. Such sub-national level initiatives can play a pivotal role in fostering social progress, through identification of specific communities where a country is falling behind, and assist in designing development models targeting the social or environmental progress of these regions.

Published in World Economic Forum on April 19, 2016. To know more