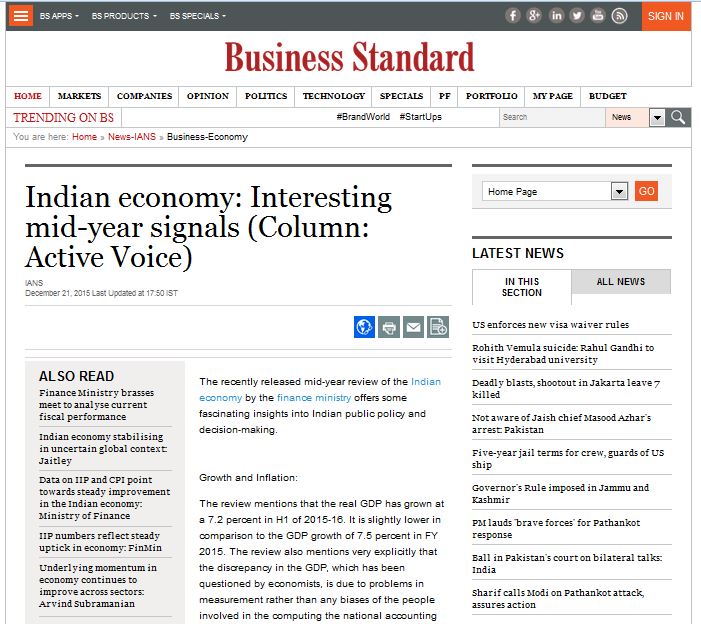 The recently released mid-year review of the Indian economy by the finance ministry offers some fascinating insights into Indian public policy and decision-making.

The review mentions that the real GDP has grown at a 7.2 percent in H1 of 2015-16. It is slightly lower in comparison to the GDP growth of 7.5 percent in FY 2015. The review also mentions very explicitly that the discrepancy in the GDP, which has been questioned by economists, is due to problems in measurement rather than any biases of the people involved in the computing the national accounting statistics.

Inflation seems to have moderated. The CPI inflation has moderated to 5 percent in October 2015 compared to 5.4 percent in February 2015. Similarly, the WPI has been in the negative territory since November 2014 and was pegged in October 2015 at -3.8 percent. The fiscal deficit target is pegged at 3.9 percent of the GDP, which has the likelihood to be met amid tax buoyancy, especially from the indirect taxes. On the flip side, the lower than projected growth rate and lower than projected disinvestment receipts may just make it more challenging to meet the fiscal deficit target.

Similarly, India’s external position appears robust. The CAD is at a comfortable level of 1.2 percent of GDP. Forex reserves are little above $350 billion in December 2014 as compared to little over $270 billion in July 2013. Also, net FDI inflows have increased to $17 billion in H1 2015-16 in comparison to $15.8 in H1 2014-15. The rupee’s performance relative to the dollar, as also against a basket of 36 currencies, has been robust – making India competitive. A stable rupee also makes it well positioned to absorb volatility as the US Federal Reserve moves towards normalcy by increasing interest rates.

The review examines the four engines that enable economic growth. Two of these seem to be working well while two seem to be a little sluggish. Public expenditure and private consumption seem to be working well. Public expenditure doing well is reflected by the growth in real gross fixed capital formation by public sector that is at present 29 percent. The credit growth in the private sector aided by the low commodity prices internationally reflect that the private consumption as being a ‘bright spot’ in the economy.

The primary sector has seen turmoil due to this being the second year being with deficient rainfall from the SW monsoon. The review offers some justifications as well as reveals some interesting points about the agriculture sector. It clearly mentions that the recent spike in the price of pulses was due to the decrease in the production of pulses which went don from 19.25 million tonnes in 2013-14 to an estimated 17.20 million tonnes in 2014-15 – a fall of 2.05 million tonnes. Additionally, the review offers close monitoring of minimum support prices (MSPs) as these have a bearing on the level and composition of agricultural output. It also mentions that agricultural credit has increased to Rs.8,45,000 crores in 2014-15.

In the industrial sector, the signals are mixed. While the index of industrial production has grown marginally better in H1 2015-16 as compared to H1 2014-15, there is variation in performance in various sectors. In production terms power, fertilizer and car sectors are surging while commodity sectors like steel, iron, aluminium and cement seem to be doing less well. The corporate sector performance contracted further by 4.6 percent y-o-y but was offset by total expenditure contracting at a higher rate (7.8 percent). The decline in raw material costs resulted in improving net profit growth that reached 9.9 percent y-o-y.

In the services sector, too, there are mixed signals. Though it performs the best among the three sectors and about the past there are still concerns about service exports. The growth of services sector accelerated to 10.2 percent in 2014-15 as compared to 9.1 percent in 2013-14. Trade, Hotel, Transport, communication and services related to broadcasting’ achieved the highest growth rate, followed by finance, real estate & professional services. Service exports as well tourism seems to decelerate.

Overall, the review offers rich insights about the Indian economy and its performance. It also gives a semblance of things that are to be expected in the future especially the forthcoming budget. Overall the review diagnoses some unique challenges that the government and its institutions must look into and resolve.

Published in Business Standard on December 21, 2015. To know more