How to push India’s competitiveness

Home How to push India’s competitiveness 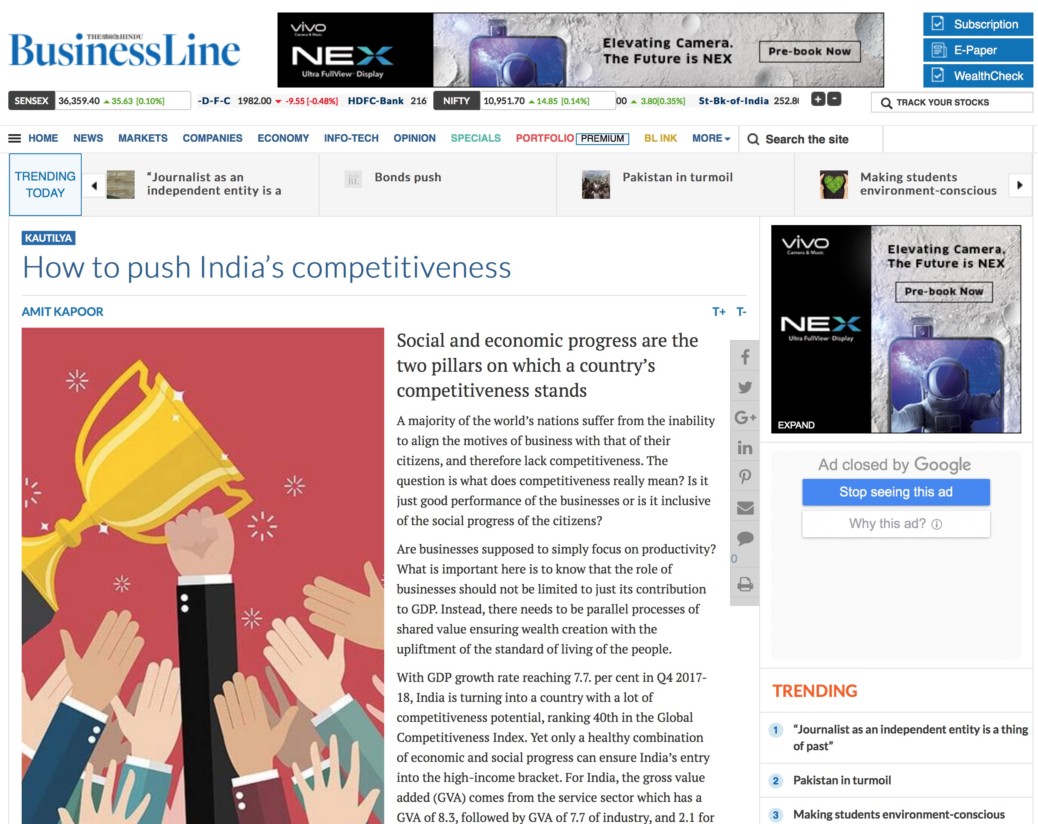 How to push India’s competitiveness

A majority of the world’s nations suffer from the inability to align the motives of business with that of their citizens, and therefore lack competitiveness. The question is what does competitiveness really mean? Is it just good performance of the businesses or is it inclusive of the social progress of the citizens?

Are businesses supposed to simply focus on productivity? What is important here is to know that the role of businesses should not be limited to just its contribution to GDP. Instead, there needs to be parallel processes of shared value ensuring wealth creation with the upliftment of the standard of living of the people.

With GDP growth rate reaching 7.7. per cent in Q4 2017-18, India is turning into a country with a lot of competitiveness potential, ranking 40th in the Global Competitiveness Index. Yet only a healthy combination of economic and social progress can ensure India’s entry into the high-income bracket. For India, the gross value added (GVA) comes from the service sector which has a GVA of 8.3, followed by GVA of 7.7 of industry, and 2.1 for agriculture and allied activities, based on the advanced estimates of 2017-18. The nation is also showing poor productivity relative to other nations.

India’s path to prosperity is linked directly to competitiveness, wherein a boost to both competitiveness and social progress are the key. As Michael Porter has stated, a nation that ensures balance between economic and social progress can enhance its productivity, followed by creating competitiveness and thus, prosperity. Therefore, it is necessary create an environment which not only pushes the businesses to compete successfully in local as well as international markets, but ensures that the average citizen’s standard of living also imporves. India needs to learn from the Nordic countries, and Asian countries like Japan and China. On one hand, Switzerland and Sweden have been able to push through the roof in social progress, ranking 5th and 8th in the global rankings. In the Asian context, Japan ranks 17th. Not only are these nations progressing socially, they have been able to reach great heights in the global competitiveness, ranking higher than India.

India needs to sustain the competitiveness it has recently earned, and the future lies in the hands of newer innovation. Currently, India ranks 60th in the Global Innovation Index (GII), lagging much behind Switzerland, Sweden, Japan and China (1st, 2nd, 14th and 22nd in GII ranking). India must strive to become an innovation hub. There is hope that Bengaluru, will become a global IT cluster by 2020, but there is also a pressing need to percolate the technology into multiple sectors — especially agriculture — to boost productivity. Other cities, such as Hyderabad, are also enroute to create clusters (cyber security), which are going to aid competitiveness. In 2017, online application for patents and trademarks increased by 90 per cent and 80 per cent, respectively, and grant of patents increased by 55.3 per cent. Even though ‘business’ in India is looking up, the economy needs to sustain the surge of competitiveness, which can be done by ensuring that India becomes an innovation-driven economy.

India needs to balance business and social progress. Unfortunately, India ranks 93rd on social progress globally. Even though the GDP growth is robust, the problem is in the facets of social progress, wherein India is unable to fulfil only one out of the two conditions for competitiveness.

The average citizen’s standard of living continues to be abysmal, with Infant Mortality Rate at 37 per 1000 live births and 21.92 per cent of the population still living below poverty level.

There is a tendency for countries to be stuck on either side, however when both of the facets can move in the same direction, that’s what Michael Porter calls the ‘Magic of Successful Competitiveness’. If one side of the story does well but not the other, then competitiveness suffers. The only way one can achieve the same is via productivity.

There is a fundamental connection between economic and social development. All in all, it is vital to understand that the road to prosperity is paved with good competitiveness and social progress that continues to remain sustainable.

The article was published with The Hindu Business Line on July 16, 2018.