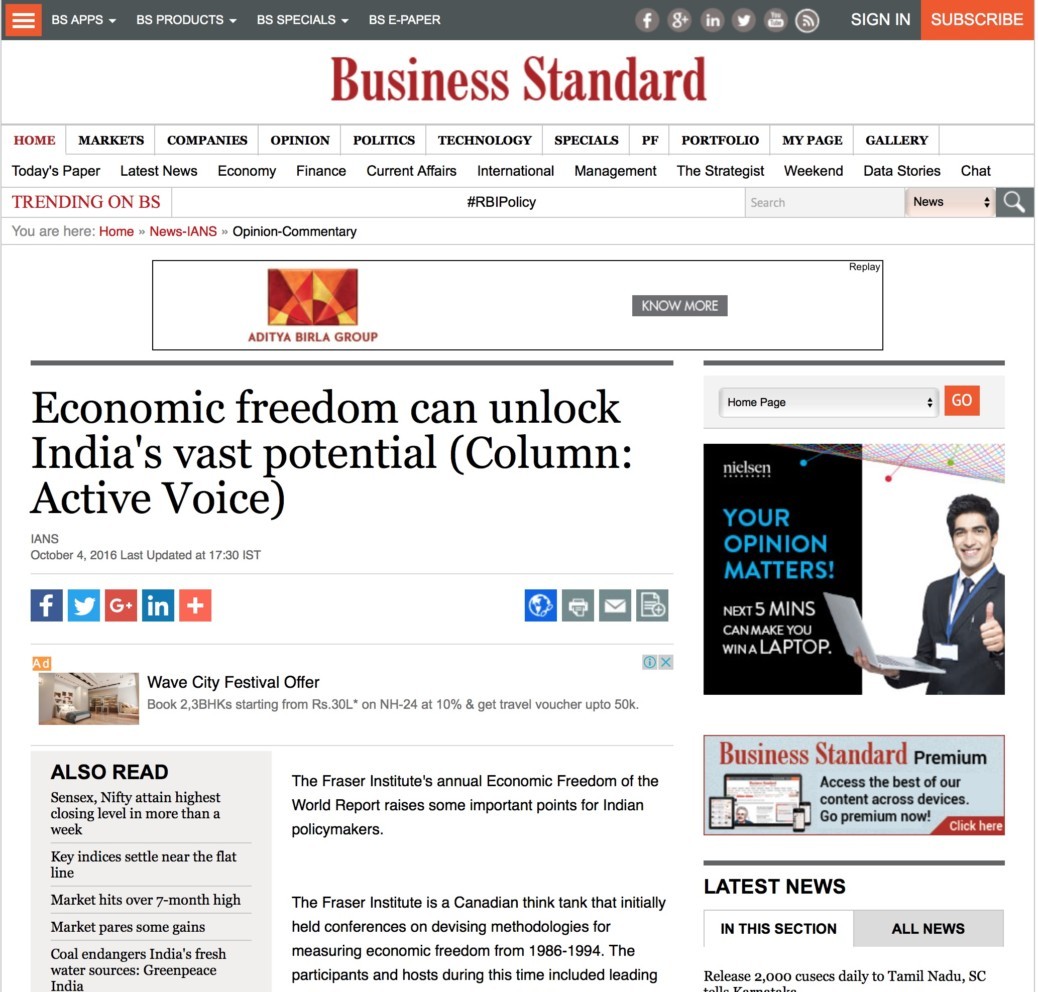 The Fraser Institute is a Canadian think tank that initially held conferences on devising methodologies for measuring economic freedom from 1986-1994. The participants and hosts during this time included leading economists and academicians like Milton Friedman, Rose Friedman, Michael Walker, Douglass North, Gary Becker, William Niskanen, and Gordon Tullock et al. Post this, the Annual Freedom of the World Report since 1996 has sought to measure economic freedom across different countries in the world. Four points emerge from Fraser’s work in the area of economic freedom.

First, what is economic freedom, its key dimensions for measurement and its benefits? A classic definition of economic freedom for individuals is when the ‘economic property that people acquire is without the use of force, fraud, or theft is protected from physical invasions by others and they are free to use, exchange, or give their property as long as their actions do not violate the identical rights of others’.

Thus, essentially, economic freedom is dependent on the following broad dimensions: Security of privately-owned property, levels of personal choice, ability to enter markets and the rule of law. The index of economic freedom thus tries to measure the extent to which rightly-acquired property is protected and individuals are engaged in voluntary transactions. The benefits of having greater economic freedom include prosperity and a higher quality of life.

Second, what are the key areas of the Index and which are the countries performing well and worse on the Index? The key areas include a) Size of government; b) Legal system and security of property rights; c) Sound money; d) Freedom to trade Internationally; e) Regulation.

Under each of these areas are further components and sub-components of measurement. In the 2016 index, for which the data is from the year 2014, Hong Kong is rated as the most economically-free country. The top 10 countries include Singapore at No.2 followed by New Zealand and Switzerland.

The third important point pertains to India and its performance in relation to other countries on the Index. India is placed 112th, which is in the third quartile of economically-free countries. Among the BRIC economies, it is placed below Russia (102) but above China (113) and Brazil (124).

Within the five broad areas, India’s rank is best for the size of the government (8), while it performs poorly on regulation (132) and freedom to trade internationally (144). Though the index does not factor in the data for 2015-16, India’s trade performance, particularly its export performance, to say the least, has been dismal due to global economic sluggishness and factors such price of commodities being low leading to low demand from commodity-rich nations and India’s global partners.

India must, thus improve along the key dimension of international trade over time in the index. Similarly, too many regulations have hampered the prospects of economic growth. The government has done well to identify and weed out key laws and regulations that are not in accordance with the present times. Better regulations over time will help in improvement along the regulation dimension of the Index.

Finally, India’s performance over time also offers important insights. According to successive reports, India’s economic freedom increased in the decade following economic liberalization in 1991 but post that has been more or less consistent with a few variations up and down.

The most recent edition saw movement 10 places down on the Index. This calls for introspection and more reforms, some of which are being presently undertaken. These include the GST law, which is in the process of implementation. More such reforms in the land, labour and capital markets will certainly be beneficial for unleashing the creative potential and freedom of Indian citizens.

Over time India must improve along the key dimensions of the Index to ensure a better quality of life for all its citizens.

Published in Business Standard on October 4, 2016. To know more