FSSAI not a Lone Ranger, states have to complement it 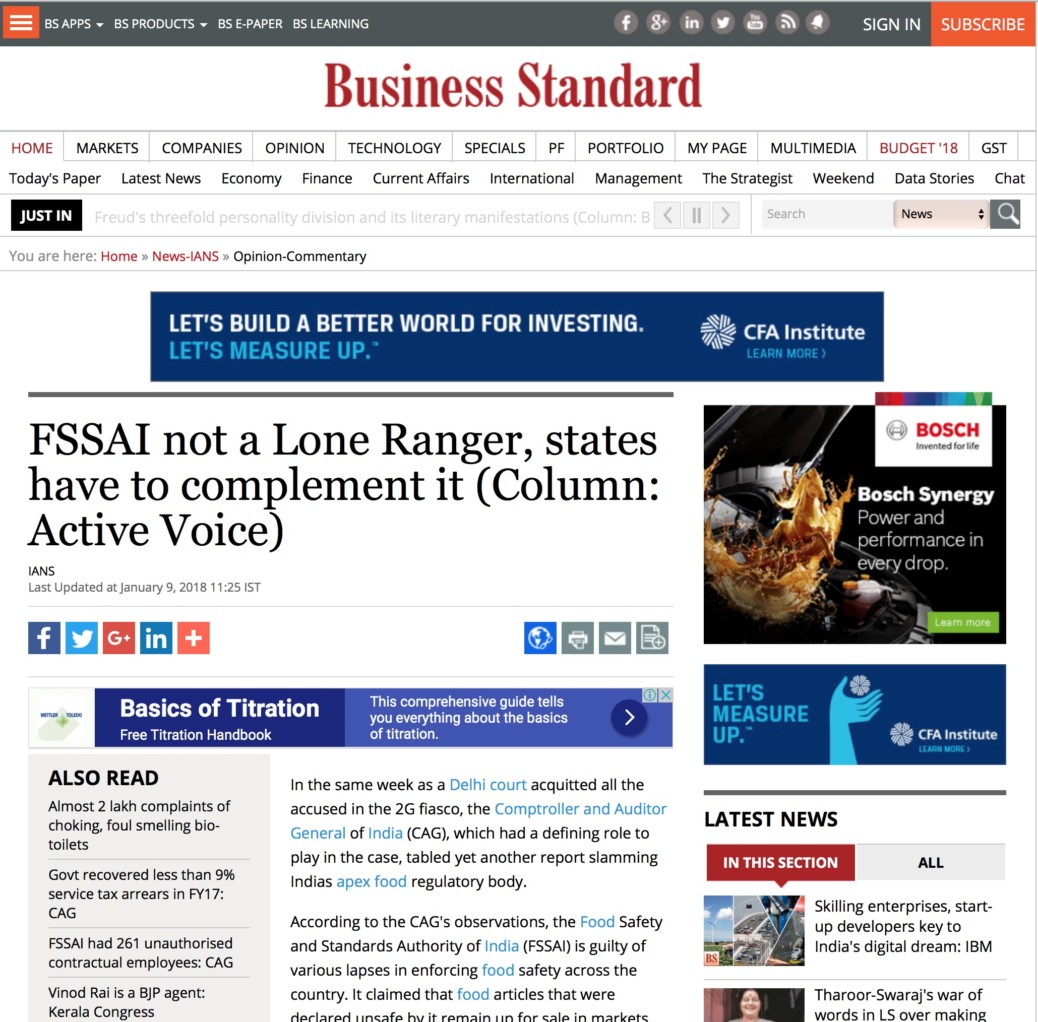 In the same week as a Delhi court acquitted all the accused in the 2G fiasco, the Comptroller and Auditor General of India (CAG), which had a defining role to play in the case, tabled yet another report slamming Indias apex food regulatory body.

According to the CAG’s observations, the Food Safety and Standards Authority of India (FSSAI) is guilty of various lapses in enforcing food safety across the country. It claimed that food articles that were declared unsafe by it remain up for sale in markets due to lack of adequate monitoring. Moreover, most of the laboratories across states do not have proper accreditation. So, the quality of their testing cannot be ensured.

At the outset, it is important to point out that food safety is an important issue to sustain a nation’s growth in the long run. Unsafe food imposes substantial direct and indirect costs. Apart from adding an avoidable strain on the country’s healthcare systems, poor food safety standards beget diseases that adversely impact the productivity of the labour force and, thus, the overall competitiveness of a nation.

Moreover, most of the burden is borne by the population at the bottom of the pyramid as they are usually more price- than quality-sensitive. Therefore, a strong food regulator becomes an absolute necessity for a nation’s sustained and balanced development.

Keeping these factors in mind, FSSAI was established in 2006 under the Food Safety and Standards Act. It was an important step which consolidated all the food safety legislation spread across different ministries under one head and marked a paradigm shift in food policy from a narrow focus on adulteration to a more holistic approach on the provision of safe and wholesome food. This implied a shift from the mere testing of the final food product for adulteration to implementing mechanisms that prevent the communication of pathogens across the supply chain. The latter approach ensured safety from “farm to plate”.

However, by picking holes in the agency’s functioning, the CAG audit takes a narrow view on the matter. Even though it has been a decade since the enactment of the food law as the report points out, implementation has always been a challenge for FSSAI due to lack of resources. After the legislation was passed, resources from the earlier regime were reshaped to fit in with the new policy. Moreover, there were legacy issues. Each state has its own unique system of food regulation which failed to evolve with the new policy. Insufficient manpower and funding impeded the process further.

FSSAI has taken active steps to remedy these issues. One, realising how it will be impractical for the food regulator to micromanage safety standards on a national scale, it is aiming to enforce a system of self-regulation. Towards this end, the agency finalised third-party auditors of food businesses and mandated the units to have at least one trained food safety expert.

Another proposed mechanism is for food companies to voluntarily participate in the Responsible Food Company Index that will measure and monitor the workings of food businesses beyond statutory compliance. Successful implementation of these processes will ensure an efficient market-based mechanism of self-assessment in food safety.

Second, to address the issue with food laboratories, FSSAI is bringing them under the Indian Food Laboratory Network (InFoLNet), a digitally centralised management system that will connect all food labs across India. All the tests and results will be available on the platform for greater transparency and reduction in information asymmetry between consumers and food businesses. It is also in the process of setting up more NABL (National Accreditation Board for Testing and Calibration Laboratories) — accredited food labs across states beyond the two that it owns and operates.

Finally, and most importantly, the agency is about to roll out a “one-nation, one-food-safety law” regime so that every state-level authority follows a common standard of practice for implementation, compliance and enforcement of food safety regulations. It is standardising the procedures around inspections done at the state level. Food safety experts will now have to follow a set of centrally-prescribed standards. This will eliminate any discrepancies across states and streamline the process of surveillance, sampling and inspection.

The states need to play their part in complementing the efforts of FSSAI to ensure food safety. A central body cannot ensure implementation across the country unless states take it upon themselves to drive the required changes at the micro level. It will also be in their best interests to follow up on FSSAI regulations. Ensuring provision of safe and wholesome food for citizens should be looked upon as an investment into increasing the productivity of the workforce that will later reap economic dividends for the state itself.

The article was published with Business Standard on January 9, 2018.