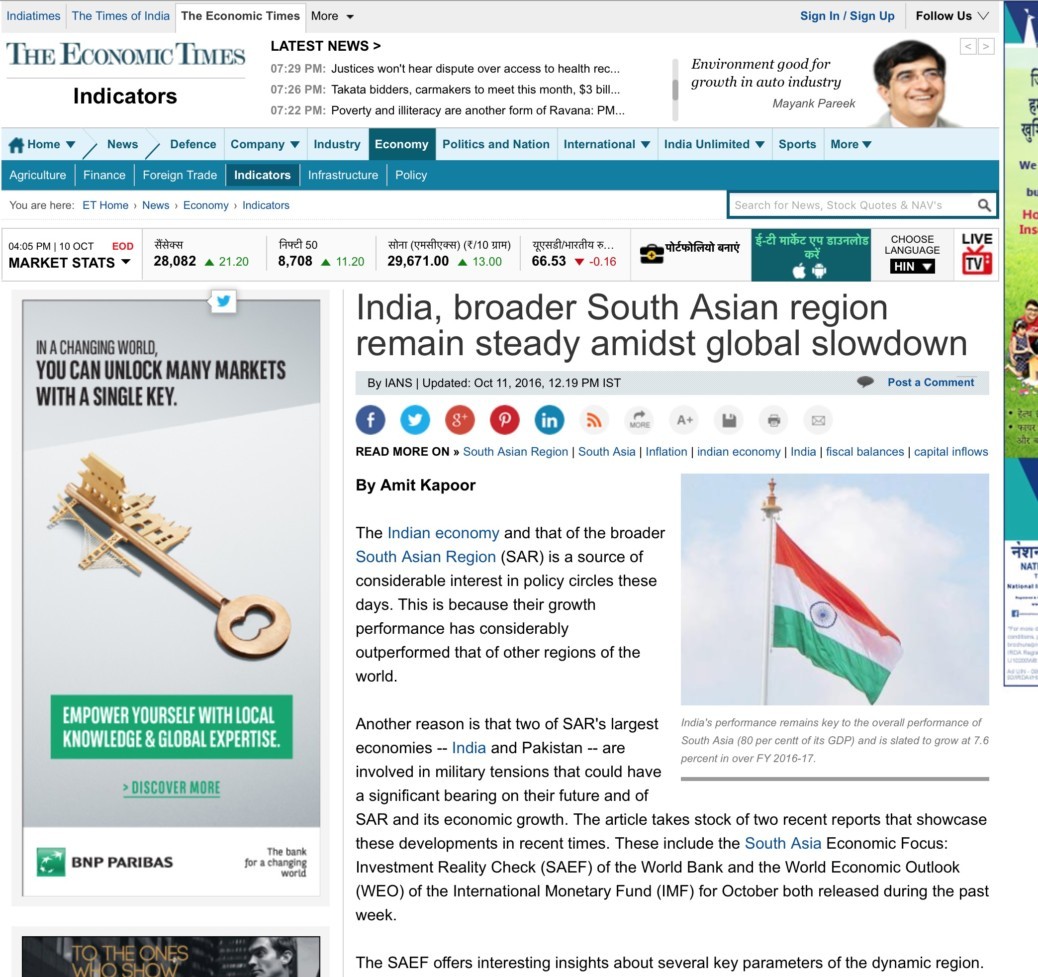 The Indian economy and that of the broader South Asian Region (SAR) is a source of considerable interest in policy circles these days. This is because their growth performance has considerably outperformed that of other regions of the world.

Another reason is that two of SAR’s largest economies — India and Pakistan — are involved in military tensions that could have a significant bearing on their future and of SAR and its economic growth. The article takes stock of two recent reports that showcase these developments in recent times. These include the South Asia Economic Focus: Investment Reality Check (SAEF) of the World Bank and the World Economic Outlook (WEO) of the International Monetary Fund (IMF) for October both released during the past week.

The SAEF offers interesting insights about several key parameters of the dynamic region. These include, but are not limited to, the growth performance of countries, external position of countries, inflation, capital inflows, fiscal balances, export performance and political and policy uncertainty. Also dealt with in depth is the issue of investment and the outlook for the region in general.

On the growth front, South Asia has maintained the top spot for eight consecutive quarters. According to the latest estimates, South Asia grew at 6.8 per cent y-o-y for Q2 of 2016. India’s performance remains key to the overall performance of South Asia (80 per centt of its GDP) and is slated to grow at 7.6 percent in over FY 2016-17.

On the external front, South Asia as a region and India, in particular, have a robust position. India’s volatility in general and financial market volatility in particular is low amongst emerging market peers. On the inflation front, there’s a recent uptick in Inflation but remains well below historic levels and hovers around 5 percent for the region as a whole. The recent interest rate cut by the Monetary Policy Committee of the Reserve Bank of India (RBI) can be seen in the light of these realities.

Capital flows have helped individual countries build solid reserves but continue to slow down, most notably in the case of FDI inflows. The import cover for India at present is close to 13 months, which puts it in a considerable position of comfort. Remittance flows like FDI inflows in recent times have slowed down owing to the oil price squeeze in the Gulf economies.

On the fiscal balances front, SAR’s performance is one of the weakest. This is because boosting government revenues is difficult in several countries of the region. Another reason is a high debt to GDP ratio, second only to the Middle East and North Africa (MENA) region but is broadly sustainable.

Another area of concern is the export performance, which showcases a persistent weakness. The trade balances showcase low exports and low imports. However, there are signs of this bottoming out.

On the political and policy uncertainty front, the countries in the region face security threats, terrorism, security transitioning, military tensions and political unrest — all of which require effective management going ahead.

The report’s focus on investment is also laudable and broadly mentions that the private sector and its investments is yet to pick up in the region. Both in India and Pakistan (10 per cent of SAR’s GDP), there is a decline in private investment. This is a crucial area for policymakers to devise strategies to tackle. The outlook, overall, remains positive but the corporate sector leverage could be an impediment and needs an active resolution from the banking sector and their respective regulators. Despite this, the region is forecasted to grow 7.5 per cent by 2019 up from the 6.8 percent in 2015.

The report also mentions China’s economic transition from a fast-investment-driven economy to a slow-consumption-driven economy. The report also goes on to note that Chinese policies over the years have a bearing on the working-age population in China, which is expected to turn negative over the next five years. This is in contrast to India, where in the decade ahead, India’s working-age population is expected to stay positive.

The report’s analysis of the Indian economy is spot on. It goes on to suggest that while crucial reforms and several positive measures have been undertaken, there are additional measures, which could boost productive capacity. These include measures to improve efficiency in the mining sector and electricity generation, improving labour market efficiency for leveraging the working population ratio and making it a demographic dividend rather than a disaster and full recognition of the losses of banks for improving the quality of financial intermediation.

The analysis in both these the reports offers sound reality check to policymakers and they should look into these areas of concern, both at country-level and even at the level of the state governments in India. Over the next few years, clear thinking and action on the points mentioned could be crucial in defining the future of not only India but the wider SAR.

Published in Economic Times on October 11, 2016. To know more