India’s economy is resilient and will bounce back, but here is the deep-rooted problem 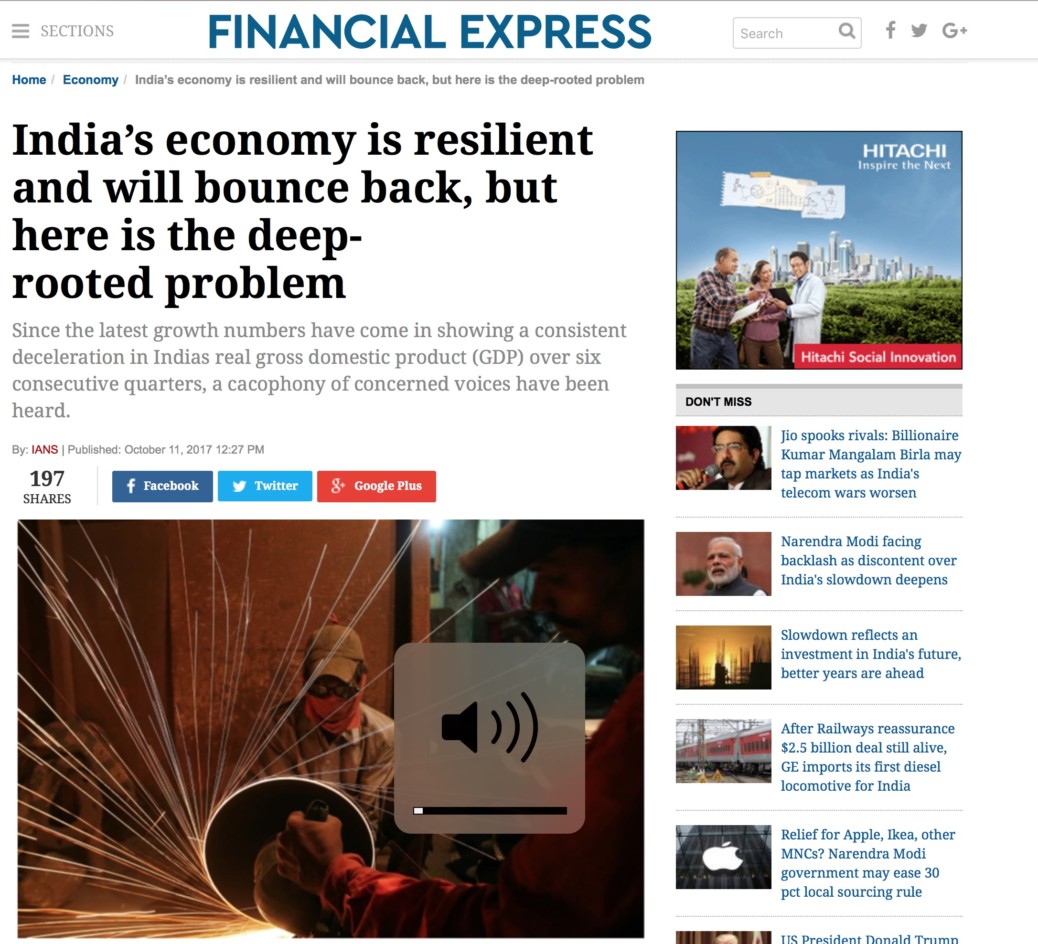 India’s economy is resilient and will bounce back, but here is the deep-rooted problem

Since the latest growth numbers have come in showing a consistent deceleration in India’s real gross domestic product (GDP) over six consecutive quarters, a cacophony of concerned voices about the economy seem to be ubiquitous. The din of criticism both from within and outside the government has grown so loud that Narendra Modi himself had to intervene last week in order to defend his economic record. This warrants the question whether the situation is as grave as it is being made out to be. The simple answer is that in some respects the economic scenario is not much out of the ordinary while in others the trends are concerning.

First and foremost are the growth figures. It is not a rare occurrence for the GDP growth to fall for such an elongated period. In fact, as recently as 2011-12, the GDP had decelerated for exactly six quarters between Q1 of 2011 and Q2 of 2012. In fact, by the end of that phase the growth rate had fallen to a lowly 4.1 percent. However, in the very next quarter it had bounced back to 6.1 percent. This is not to make a simplistic argument for complacency, but to point out that growth in developing countries tends to be highly volatile and the Indian economy has shown strong resilience to such downturns. Therefore, a sense of panic is unwarranted and premature.

The second general concern with the economy is slightly more problematic. However, as we will show, it is not out of the ordinary as well. The level of investment in the economy has become a major cause for concern. As we’ve pointed out in this column earlier, the level of private and household investment has hit rock bottom and only public investment has been pushing the economy forward. However, World Bank data shows that India’s gross fixed capital formation (GFCF), the leading indicator for investment, has been consistently falling over the last decade. In 2007, India’s GFCF had reached an all-time high of 36 percent of GDP close to China’s 39 percent. Since then India’s GFCF has fallen to 27 percent while it has risen to 43 percent for China. This points to the fact that investment sentiment never recovered in India after the 2008 crisis.

Again, a long-term negative trend is no reason for complacency. According to the RBI Annual Report, the non-food credit take-off across the country has been at its lowest in almost 25 years. Low credit take-off indicates that industrialists are unsure of future prospects and have postponed investments owing to weak demand. The twin balance sheet problem being the leading cause behind the muted investment sentiment needs to be urgently resolved. Fortunately, the government has been proactive on this front and is taken some positive steps to resolve bad debts of big accounts.

Apart from the fact that growth and investment have historically shown poor trends and that we are not in a unique situation, the fundamentals of the economy are significantly stronger than usual. The government has done a good job of sticking to its fiscal deficit targets while the RBI has done the same with inflation. Moreover, the country’s foreign exchange reserves have crossed $400 billion, which are huge by any standard. To put things in perspective, these reserves equalled 78 percent of India’s total external debt (both short and long term) at the end of March. It may be debatable whether the country needs such a huge trove of reserves, but they are considerable enough to ensure short-run and medium-term stability of the economy.

The most concerning factor of the economy, which also has had a similar long-term history, is unemployment. Lack of jobs is an aspect of the Indian economy that simply can no longer be ignored. Since India missed its own industrial boom and directly ended up becoming a service-led economy, jobless growth has been a long-held problem. This is because services are not as labour-intensive as manufacturing. However, this have worsened more recently. Between March 2014 and 2016 India experienced an absolute decline in employment probably for the first time in independent India, as pointed out by the Economic and Political Weekly. A fall in the absolute number of jobs for a developing country like India where 10 million people are expected to join the workforce annually is disastrous, to put it mildly.

All in all, the falling growth rate will reverse its trend soon as history proves. This will happen over the next few quarters as the aftereffects of the twin shocks of demonetisation and GST subside. Investment will hopefully see a revival once the banks find their balance sheets improving. But, the problem of job growth will pose the real challenge to the Modi government.

The recent frenzy around the deceleration of GDP growth does not do justice to this structural problem with the Indian economy. Indian growth rates are understandably volatile and the fall in this period has been accentuated by demonetisation and implementation of GST. The economy is resilient enough to extricate itself out of these shocks and, in fact, the latter will only be beneficial for it in the long run. The real problem lies with job creation and it was not a problem created yesterday. The problem of jobs is deep-rooted within the economy and will require equally deep-rooted reforms. The specifics of those reforms are a discussion for another day but first, we need to begin by shifting our focus to the appropriate concerns.

The article was published with Financial Express on October 11, 2017.