Bangladesh could well march past India on the growth path

Home Bangladesh could well march past India on the growth path 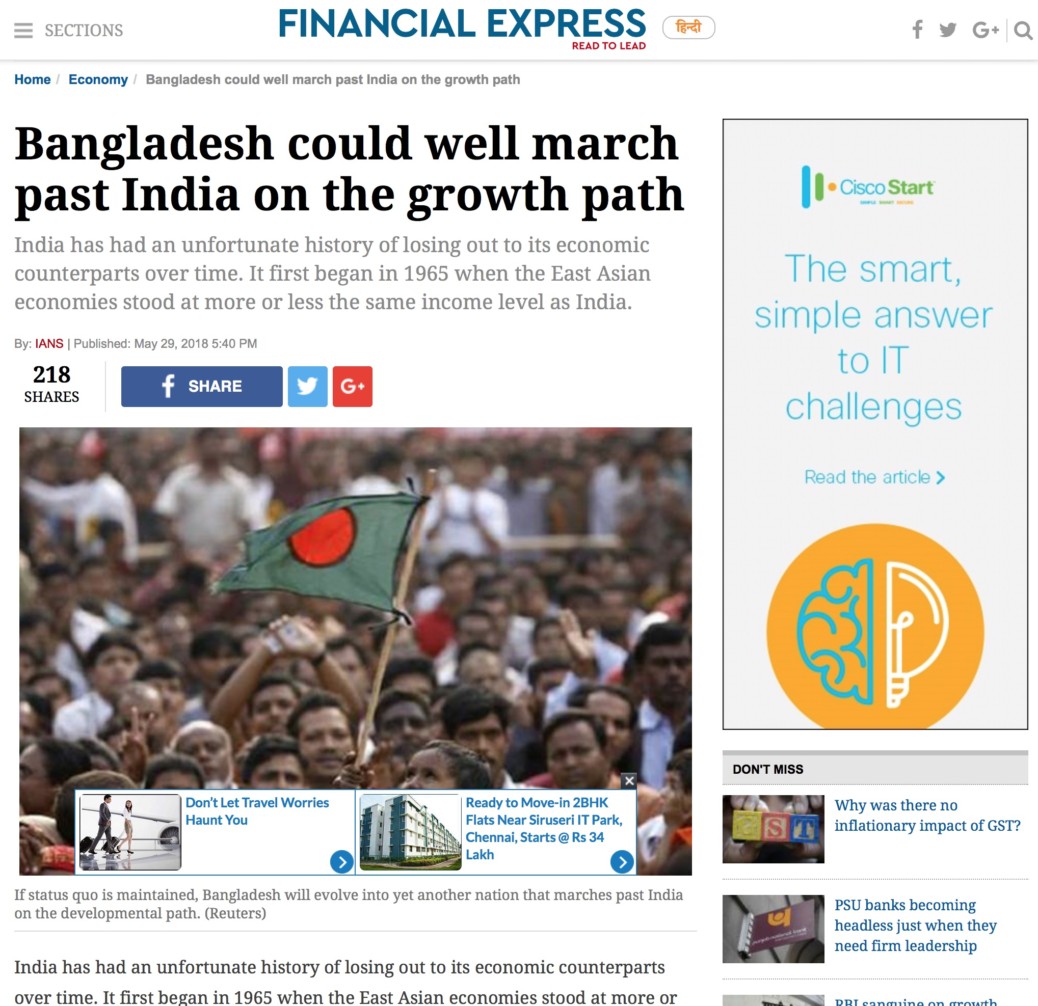 Bangladesh could well march past India on the growth path

India has had an unfortunate history of losing out to its economic counterparts over time. It first began in 1965 when the East Asian economies stood at more or less the same income level as India.

India has had an unfortunate history of losing out to its economic counterparts over time. It first began in 1965 when the East Asian economies stood at more or less the same income level as India. Then the former group of countries adopted more pro-market reforms and focused on making the export sector more competitive while India shifted leftward on the economic policy spectrum under Indira Gandhi and strengthened the so-called ‘license-raj’.

For the following three decades, the East Asian economies would grow at a breakneck pace leaving India far behind. A similar fate awaited India following the market reforms of Deng Xiaoping in China after 1978. The current economic heft of China makes it difficult to imagine that its income levels were similar to that of India before Deng came along.

Now, it appears that history is about to repeat itself as the economic successes of Bangladesh gradually gain momentum. When Bangladesh was first reported to have grown at a faster rate than Pakistan in 2006, it was treated as a temporary blip. But, Kaushik Basu recently pointed out that since then it has exceeded Pakistan’s growth rate by more than 2.5 percentage points each year. Bangladesh even has a lower population growth rate than Pakistan. So, the per capita income of an average Bangladeshi is growing at an even faster rate.

Bangladesh is now a regular feature in the top 10 fastest-growing economies around the world. It grew at 7.28 percent in the last fiscal year. As a result, it was its seventh year in a row that its GDP growth had exceeded 6 percent. This is a small feat by no means, especially considering the fact that the period coincided with the slowing down of most of the emerging countries around the world. In fact, in the last few years the country’s growth rate has exceeded that of India itself. In the three years preceding 2016, the per capita income of Bangladesh had grown by about 40 percent while India grew at a measly 14 percent. At this rate, it is estimated that Bangladesh could exceed India’s per capita income by 2020.

The Bangladesh growth story is more exciting due to its inclusive nature unlike most emerging economies. A World Bank study on the country’s growth for the period 2005-10 found that the average income of the poorest 40 percent households grew faster than for the rest of the country by 0.5 percent. During the same period, India’s poorest 40 percent did far worse than the national average. Quite understandably, poverty rates in India are higher.

Bangladesh also outperforms India when it comes to social development indicators. An infant born in Bangladesh is more likely to celebrate her fifth birthday than her Indian counterpart and also live longer than the latter. The country has also performed better on education parameters and gender equality.

What makes the performance of Bangladesh even more impressive is that it has displayed such strong developmental outcomes despite numerous challenges like poor infrastructure and lack of any large-scale public investment on developmental projects. The only explanation for Bangladesh’s growth performance can be attributed to two major factors – both institutional. One is the long-standing garment industry and the second is the country’s developed NGO network.

The first aspect arose out of a historical accident when the United States imposed a textile quota system in the 1970s to protect the domestic industry from the burgeoning South Korean industry. To bypass the quota restrictions, Koreans moved the production to Bangladesh where labour was cheap and readily available. Bangladeshi businessmen quickly picked up on the required technical expertise and set up their own businesses. The second aspect explains the country’s remarkable achievements on the economic and social scale despite the lack of government intervention in resource mobilisation. The presence of active civil societies at the grass root level has enabled the provision of education and healthcare services even at the lowest strata of the society.

Both the aspects that explain the sustained growth spurt in Bangladesh are very unique to the country and provide no scope for replicability. However, there are remain a few crucial insights from the growth experience of the country. First, it highlights the importance of working upon the strengths to build a competitive edge in the world market. Second, it shows the effectiveness of ensuring development at the grass root levels in reducing poverty and driving inclusive growth. India especially falters on both of these fronts.

It needs to be seen if Bangladesh can sustain the promising growth momentum that it has displayed over the last few years, but its performance until now signals a warning sign for India. If status quo is maintained, Bangladesh will evolve into yet another nation that marches past India on the developmental path.

The article was published with Business Standard, Financial Express, Maharashtra Today on May 29, 2018