Quebec, Qingdao and the new age of multilateralism

Home Quebec, Qingdao and the new age of multilateralism 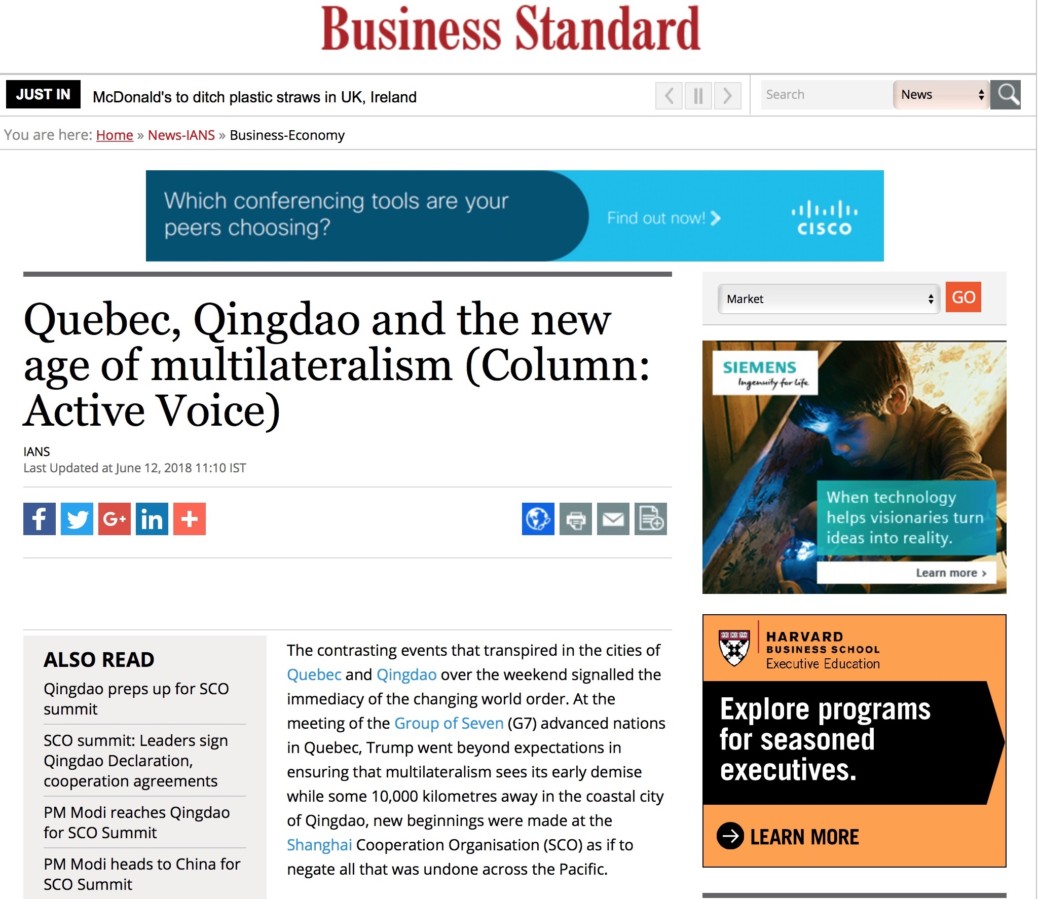 Quebec, Qingdao and the new age of multilateralism

The contrasting events that transpired in the cities of Quebec and Qingdao over the weekend signalled the immediacy of the changing world order. At the meeting of the Group of Seven (G7) advanced nations in Quebec, Trump went beyond expectations in ensuring that multilateralism sees its early demise while some 10,000 kilometres away in the coastal city of Qingdao, new beginnings were made at the Shanghai Cooperation Organisation (SCO) as if to negate all that was undone across the Pacific.

It is evident that Trump attended the G7 in protest. He made no amends with his allies over escalating tariff wars but, instead, upped his threats. He arrived late for meetings, lashed out at other leaders and left early. He even pulled out of the joint statement and later berated his hosts over Twitter. After the meeting of Trump with Kim Jong-un, the US might be on better terms with North Korea by the end of this week than it is with its allies.

By isolating himself so completely, Trump has possibly killed the G7 as the US was the power holding the group together. Currently, it is the only platform for the Western countries that acts as a steering committee for the world economy. There was a reason that the second-largest economy of the world, China, was kept out of the group. Without America’s support, G7 will find it impossible to survive. The power vacuum can only be filled by China and it is doing so, quite effectively.

Snubbed by the US, Europe has been rolling out the red carpet for China by enthusiastically participating in its Belt and Road Initiative (BRI) and other such multilateral and bilateral efforts. The SCO was yet another successful attempt by China to strengthen regional ties; this time in Central Asia. The group that started off as the “Shanghai 5″ in 1996 (Kazakhstan, Kyrgyzstan, China, Russia and Tajikistan), mainly for ensuring regional security, has evolved into the SCO that now includes India and Pakistan within its fold and espouses a global vision with a strong economic mandate. The regional grouping accounts for about 40 percent of the world’s population and 20 percent of its GDP.

By contrast, the G7 countries account for only 10 percent of the world’s population but 50 percent of its GDP. Yet, the SCO nations presented a more promising front this weekend. They stood for everything the G7 could not. While the industrialised nations were engaged in personality clashes, the Asian grouping was more proactive in engaging in dialogues of regional cooperation and development. In a veiled dig at the US for withdrawing from the Iran deal, Hassan Rouhani was also given a warm welcome at the SCO and the Asian leaders even promised to try and save the deal from meeting a premature end.

It is sometimes naively believed, or rather hoped, that the withdrawal of America from the established global economic order is merely a passing phase and as Trump moves out of office, the idea of multilateralism will somehow revive itself. But it needs to be understood that Trump is not acting on his own accord. His voters have strongly come to abhor the idea of globalisation and free trade. They believe that they have been short-changed in the entire process and will not vote for anyone who promises to revert to the old days. So, the establishment of the Asian century is inevitable.

India, on its part, can have a greater role to play in this new world order. To its credit, the country has been at the forefront engaging vigorously with numerous world powers and regional groupings. However, its emergence as a global power will depend on its ability to decisively influence multilateral processes. For instance, India has remained steadfast in its opposition to China’s Belt and Road Initiative. At the SCO, Prime Minister Narendra Modi even remarked that India would welcome any connectivity projects that respect the sovereignty of other nations. But, expectedly, New Delhi finds itself alone in its opposition to the project. India lacks the economic heft to sway multilateral agreements in its favour. That remains its Achilles heel.

The changing world order presents an opportunity for India to make its mark on the world stage. It needs to expedite the resolution of its economic shortcomings. It has the benefit of being the biggest democracy in Asia and leverage it to its advantage. Surely, if India could present a viable alternative to China, the European nations would prefer siding with a liberal democracy than an iffy autocracy.

The article was published with Business Standard, Moneylife.in on June 12, 2018.