Is perception a good measurement of corruption? 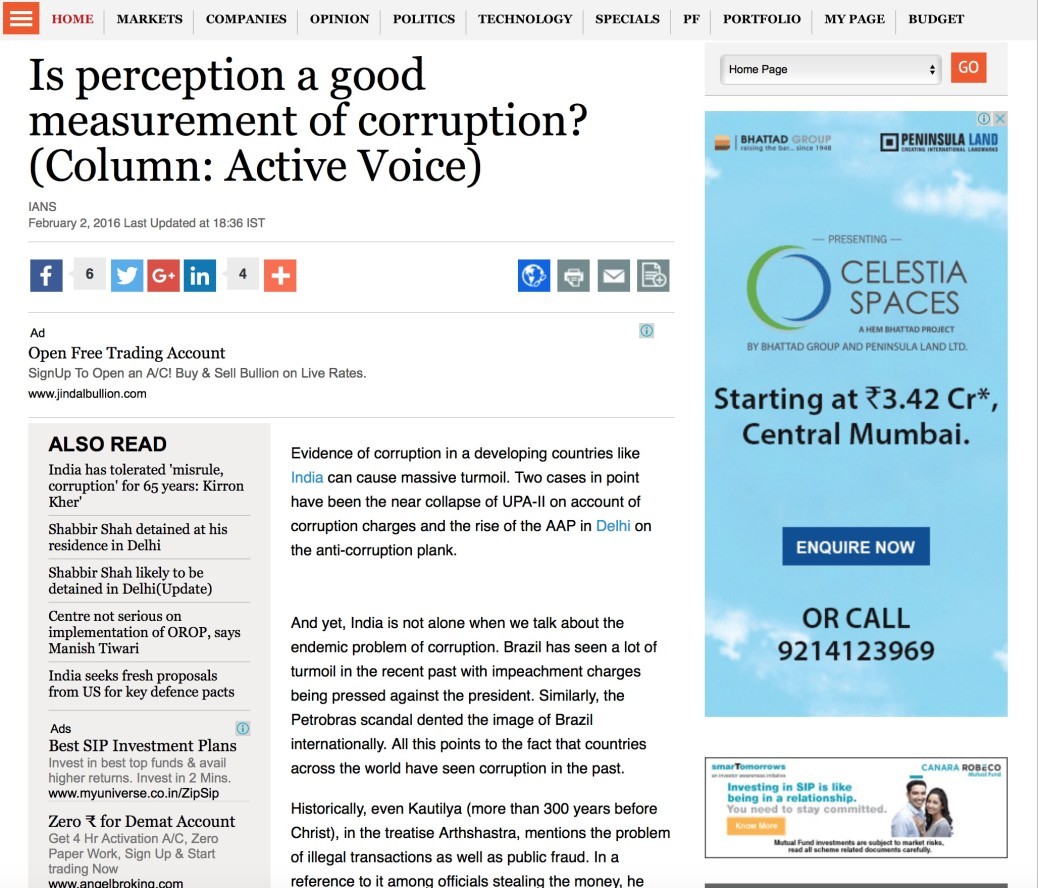 Is perception a good measurement of corruption?

Evidence of corruption in a developing countries like India can cause massive turmoil. Two cases in point have been the near collapse of UPA-II on account of corruption charges and the rise of the AAP in Delhi on the anti-corruption plank.

And yet, India is not alone when we talk about the endemic problem of corruption. Brazil has seen a lot of turmoil in the recent past with impeachment charges being pressed against the president. Similarly, the Petrobras scandal dented the image of Brazil internationally. All this points to the fact that countries across the world have seen corruption in the past.

Historically, even Kautilya (more than 300 years before Christ), in the treatise Arthshastra, mentions the problem of illegal transactions as well as public fraud. In a reference to it among officials stealing the money, he mentions that it is easier to ascertain the movement of birds in the sky rather than track the activities of corrupt officials. While things have got a lot better than the Mauryan times, there remains the endemic problem of corruption. The question is how do we track or measure it?

Reference to corruption is used in the context of use of public office for private good. However, this is not the only form of corruption one can think about or in which corruption can exist. Corruption can be with respect to the movement of files quickly through a system, as well as be benefits in kind and the like. Corruption can be classified in various ways – as public versus private, moral versus monetary and even institutional versus retail. However, a fundamental feature is that it corrodes public wealth and often causes a loss to the society. It is worth mentioning that corruption can also be between two private individuals, though often people conceive it to be a public problem.

Transparency International, which works in the area of transparency and accountability of corporations and public institutions, does exactly that and measures corruption annually. It has just released its Corruption Perception Index 2015.

The index is on a scale of zero to 100 with zero being totally corrupt and 100 being totally clean. India has a score of 38, which shows it is relatively corrupt. However, this year the country is ranked 76 out of 168 economies compared to 85 out of 174 economies in 2014. India is better placed than its BRICS peers with Brazil at 76; Russia at 119; China at 83; and South Africa at 44.

While the index shows scores and ranks across countries, it does not tell much about the level of corruption actually observed. The problem arises as the index assumes that the best way for measuring corruption is measuring its perception. Another point is that is it valid to put a single number on the plethora of experiences businesses have in governance. What about the experiences of common citizens? Proxies in the index like the number of people caught for actual corruption can add value to the index. These can include details about charges of corruption and enforcement of these charges by public officials. Such actual cases can help assess corruption and not just the perception of corruption.

Over time, India should improve on the corruption perception rating. The new government, to its credit, has not had big scams in the past, but the retail level corruption seems to be where it was. On a methodological note, Transparency International could use actual indicators which tell about corruption charges and enforcement at the ground.

Published in Business Standard on February 2, 2016. To know more