Is ‘Smart City’ just a concept? 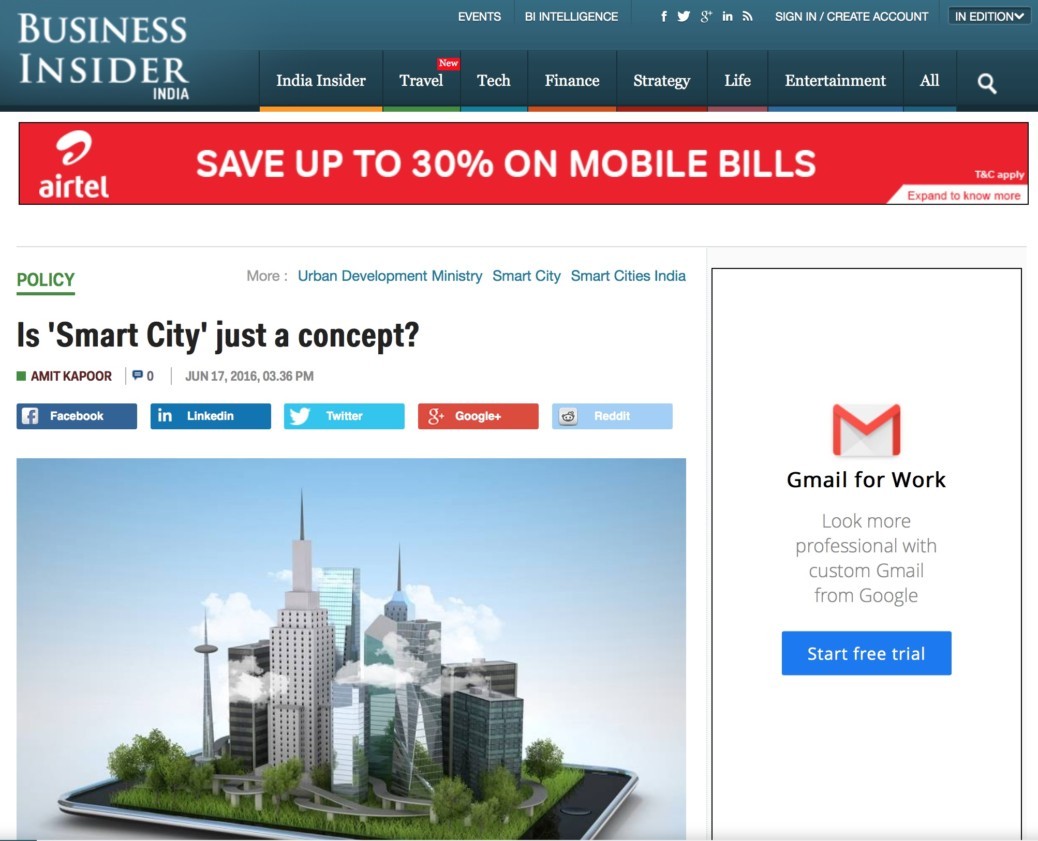 The mission of ‘Developing 100 smart cities’ has come a long way from being just a manifesto promise to the final selection of potential smart cities in India. The ‘Smart Cities Mission’ was officially launched in June 2015 and is about to complete a year, which mostly includes planning. Even though the first batch of 20 cities was announced at the beginning of this year based on a city level competition, no progress has been made on the ground. Now with the addition of 13 more cities in the mission list, the future roadmap of the mission is repeatedly questioned. The high expectations set on the mission earlier now seems to be waning because of no visible development and lack of focus from the concerned authorities.

As per the laid down blueprint, 20 smart cities should have been identified by 2015, 40 to be selected in 2016 and the remaining set of 40 in 2017. However, till date the mission is stuck at the planning stage and struggling to take the next round of steps. One of the possible reasons could be the lack of explicitly defining the timelines of the mission completion at the first stage. The mission seems to be moving forward with no set deadlines and the Urban Development Ministry has also raised their concerns on the matter. They have urged the CEOs of SPVs (Special Purpose Vehicle) of the first 20 smart cities to launch their projects latest by June 25 because time-bound actions are prerequisite for the successful implementation of any project. The timeline is a vital component of the entire mission and cannot be ignored because the progress can only be measured by using it. So no sign of implementation at the ground level has been created some bits of anxiety among the key stakeholders in the project including the citizens.

It has also been noted that urban schemes that require state participation, generally progress at a slow rate, which can be a possible case with smart cities in India. The state government has a considerable say in the city level matters because of the hierarchical administrative structure. Thus offering little power to the urban local body (ULB) and raising concerns about the long-term sustainability of the smart city . Even the formation of Special Purpose Vehicle (SPV) to resolve the issue is suspect due to problem of coordination among stakeholders. Another problem is tentative political hand in appointments. These factors can increase the probability of creating inconsistency in city’s management operations like infrastructure approvals.

At this juncture, when most of the hurdles to achieve the goal of smart cities have been successfully passed, it is time to execute the action plan. It is important to realise that the mission is already running behind time and not paying attention to the inherent problems in the system can delay the project further. It can lead to a scenario similar to Jawahar Lal Nehru National Urban Renewal Mission (JNNURM) where out of 1345 sanctioned projects in Phase 1 (March 2005 – March 2012), 715 projects were not completed by the stipulated date. As a result, the cost of implementation kept increasing with time and this acted as a roadblock in the development process of India.

Even Kevin Stolarick, Canadian expert on Urban Affairs pointed to the severity of the challenge of creating smart cities based on his experience after visiting 35 Indian cities. According to him, when the fundamental infrastructure isn’t in place in India then how will the smart cities initiative take off and cater to the masses. As Maslow defined the hierarchy of needs for individuals, cities too have their own hierarchy needs. And just as it’s hard to be ‘self-actualizing’ if you are hungry or unsafe – how can a city become a ‘smart city’ if it does not have the basic infrastructure in place?

The concept is also focusing on transforming just a section of the selected city, which will serve only a fraction of the city and might create inconsistency in the city’s operation. Jaipur has a land area of 27,630 acres but as per its smart city plan, only 706 acres will be considered for the area-based development. The step raises a question that why is the bigger picture not looked at. If the smart cities are not meant for all the citizenry of a city then why it is being promoted as an inclusive approach.

Today, developing cities are more of a necessity than an ambition for India so it is critical to engage the right set of professionals from ideation to execution of the mission. The involvement has to be of professionals with domain expertise from the government or private institutions because a lot of innovative thinking and experience is required to lead the mission. Experts with leadership skills can help the mission to get back on track and manage the performance gap, which the mission seems to be facing at the moment.

The need of the hour is, therefore, to start rolling the mobilised resources and convert plans into actions because the earlier it is done, the better it will be to support the fast-paced urbanisation in India.

Published in Business Insider on June 17, 2016. To know more