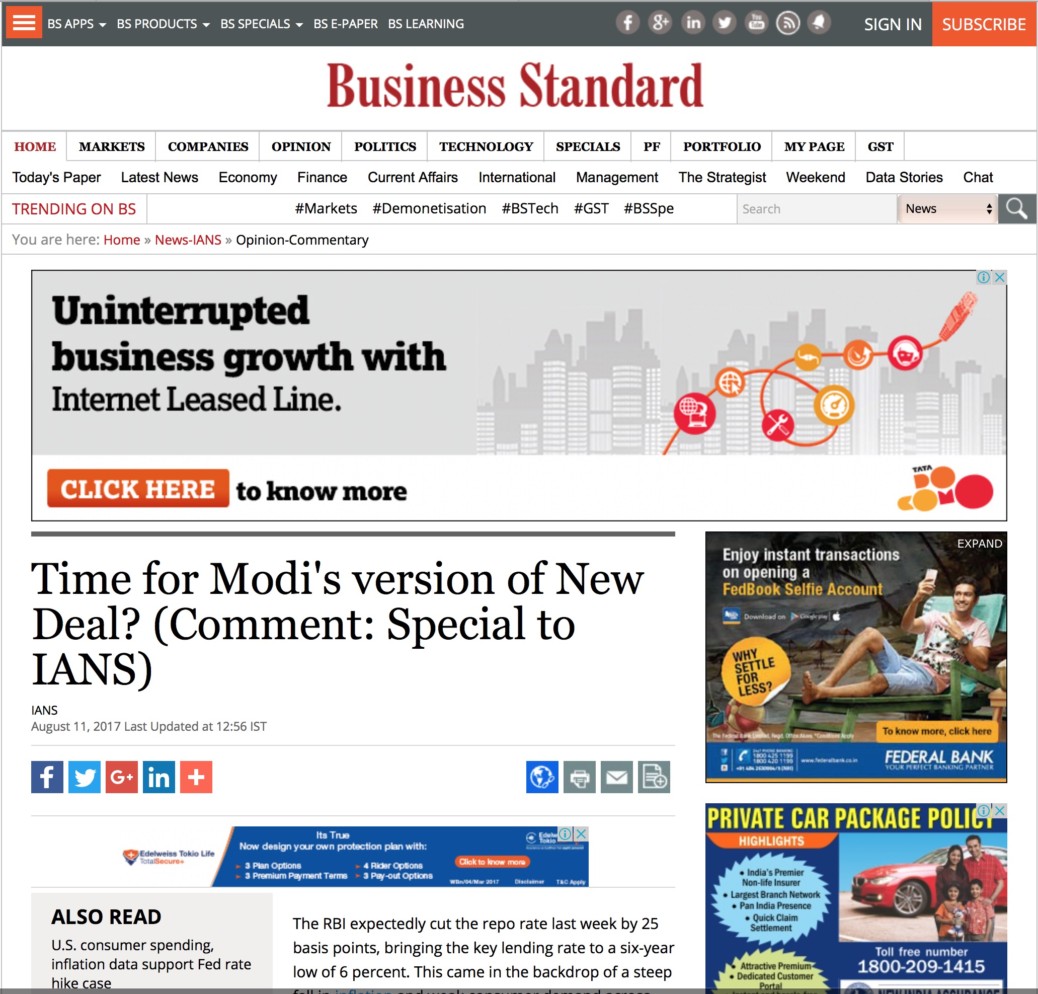 The RBI expectedly cut the repo rate last week by 25 basis points, bringing the key lending rate to a six-year low of 6 percent. This came in the backdrop of a steep fall in inflation and weak consumer demand across the country. However, even though the industry had long demanded the cut, it is unlikely to do much to revive investment activity across the country as the root cause for the problem does not lie in high-interest rates. The twin balance sheet problem of high corporate debts and rising non-performing assets (NPAs) with banks has been impeding fresh corporate investments. Both borrowing and lending activities have been affected due to this long-standing problem. As of March 2017, India’s corporate debt-to-GDP ratio stood at 55 per cent of the GDP, which is one of the highest among the emerging economies. Moreover, a recent IMF report points out that nearly a fifth of the corporate debt is held by companies that are not making a profit. In such a scenario, firms will remain conservative and avoid borrowing more funds as long as their debts remain at unmanageable levels.

Further, the high levels of corporate debts are saddling banks with a rising pile of NPAs on their books. This is making banks risk-averse as a result and, hence, warier of lending to corporates. Bank credit to the commercial sector has fallen below to 38 per cent in FY 2017, down from 50 percent a year ago. On the other hand, the bond market is booming with investment bankers arranging nearly Rs. 1.04 lakh crore ($16 billion) in the April to June quarter of this year — the highest ever volume in the first quarter. This behaviour points to the fact that Indian corporates are tapping more into the corporate bond market and taking the external commercial borrowing route for their financial needs instead of relying on banks. Hence, transmission of interest rates will always be an issue.

Thus, under the given situation, monetary policy can only do so much to remedy the current economic scenario which is in doldrums. Both the savings rate and the investment rate in the country — the two major drivers of growth — have consistently fallen in the absence of strong domestic or global demand. The savings rate (ratio of gross saving to GDP) has fallen from 33.1 per cent in 2014-15 to 32.3 per cent in 2015-16 while the investment rate (ratio of gross capital investment to GDP) has declined to 27.9 per cent, from a peak of 37 per cent in 2007. As a result, the index of industrial production (IIP) has plummeted to 0.4 per cent in June of 2017 from a robust 7 per cent a year ago. Coal and cement production, which are the foremost indicators of industrial activity in the country, have contracted by 6.7 per cent and 5.8 per cent respectively in June.

Such a welter of worrying trends — including reduced GDP growth, tepid exports and low credit growth — make a strong case for the need to employ policy tools apart from monetary ones. Perhaps, it is time the government partly gives up the strict fiscal discipline that it has been following. It is necessary to question the extent to which fiscal restraint should be practiced. In times of low inflation and uncertain output gains, the nominal GDP is bound to fall. Maintaining low levels of fiscal deficit in such an economy can hardly be appreciated.

In fact, the government has enough fiscal space to loosen its purse strings. It can push the fiscal deficit target from 3.2 per cent of GDP to 3.5 per cent for 2017-18 without violating the provisions of the Fiscal Responsibility and Budget Management Act. Also, the tax revenues for the government has seen an upward trend of late. The central tax revenue has risen by 36.2 per cent and non-tax by 4.1 per cent in the first two months of this fiscal as compared to the same period last year.

However, while pursuing expansionary policies, fiscal authorities need to do more than just indulge in higher public expenditure. They should pursue institutional policies that can stimulate demand on a sustained basis. Therefore, fiscal expenditure in sectors that can generate the maximum amount of jobs would be the most effective course of action. It just might be time for Modi’s version of the New Deal!

The article was published with Financial Express, Economic Times,  The Quint, Business Standard and Millennium Post on August 11, 2017.