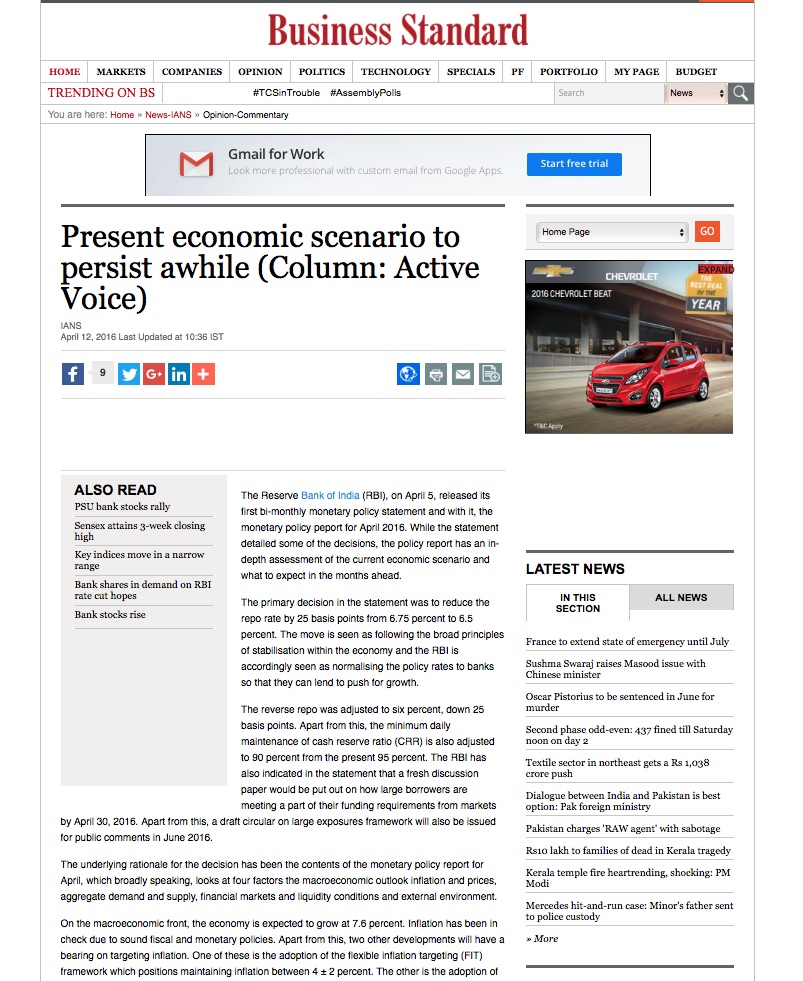 The Reserve Bank of India (RBI), on April 5, released its first bi-monthly monetary policy statement and with it, the monetary policy peport for April 2016. While the statement detailed some of the decisions, the policy report has an in-depth assessment of the current economic scenario and what to expect in the months ahead.

The primary decision in the statement was to reduce the repo rate by 25 basis points from 6.75 percent to 6.5 percent. The move is seen as following the broad principles of stabilisation within the economy and the RBI is accordingly seen as normalising the policy rates to banks so that they can lend to push for growth.

The reverse repo was adjusted to six percent, down 25 basis points. Apart from this, the minimum daily maintenance of cash reserve ratio (CRR) is also adjusted to 90 percent from the present 95 percent. The RBI has also indicated in the statement that a fresh discussion paper would be put out on how large borrowers are meeting a part of their funding requirements from markets by April 30, 2016. Apart from this, a draft circular on large exposures framework will also be issued for public comments in June 2016.

The underlying rationale for the decision has been the contents of the monetary policy report for April, which broadly speaking, looks at four factors the macroeconomic outlook inflation and prices, aggregate demand and supply, financial markets and liquidity conditions and external environment.

On the macroeconomic front, the economy is expected to grow at 7.6 percent. Inflation has been in check due to sound fiscal and monetary policies. Apart from this, two other developments will have a bearing on targeting inflation. One of these is the adoption of the flexible inflation targeting (FIT) framework which positions maintaining inflation between 4 ± 2 percent. The other is the adoption of the monetary policy committee for a decision on the monetary policy of the country which is at present taken by the RBI governor.

The outlook for growth remains upbeat but some factors can impinge on growth. These include lower investment demands due to corporate debts and tepid global output and trade growth leading to a fall in exports. On the positive side, the RBI mentions the government’s Start-p initiative as well as strong commitment to fiscal targets, and a thrust on boosting infrastructure which could brighten the growth prospects going ahead.

On the aggregate demand and supply front, according to the report, domestic activity seems to have slowed in the second half of 2015-16. Aggregate demand was restrained due to a combination of stalling of fixed investment, weak rural consumption and ongoing fiscal consolidation. Aggregate supply seems to have moderated with the impact of deficient monsoon on agriculture. Similarly, GVA (gross value added) in industry benefited from a decline in input costs while the services sector remained in an expansion mode.

Different markets experienced different things ranging from insulation to bouts of volatility. Money, credit and bond markets were relatively well-insulated while foreign exchange and equity markets experienced bouts of volatility. Liquidity conditions tightened in the second half of the year. However, the flow of resources to the corporate sector remained buoyant. The overall conditions in the markets remained robust.

On the external environment front, the report noted that global economic activity slackened further, and international trade remained subdued while downside risks have increased. Weak demand and low commodity prices have rekindled fears of deflation in some advanced economies which have led to divergence of policy stances. The emerging markets remain vulnerable to swings in sentiments and capital outflows going ahead.

What the report seems to be suggesting is that the present economic situation of weak global growth with low global commodity prices and subdued trade growth is going to persist for some time in the future.

Published in Business Standard on April 12, 2016. To know more