The Smart City imperative in India 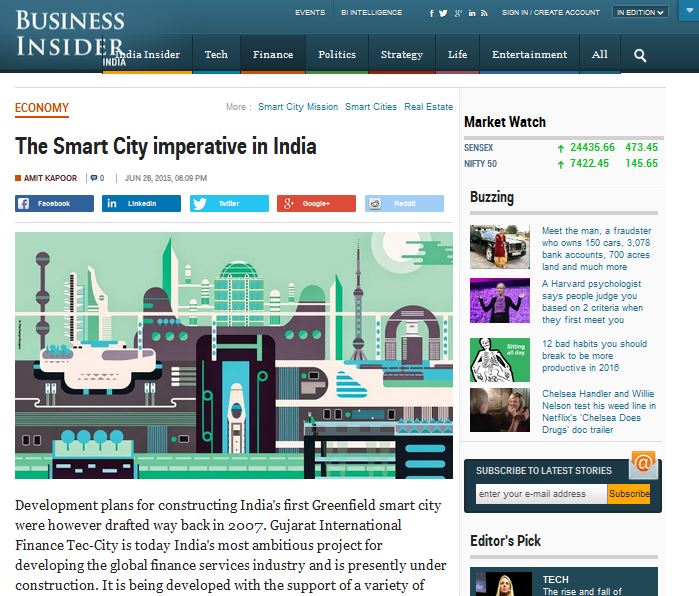 The Smart City imperative in India

Development plans for constructing India’s first Greenfield smart city were however drafted way back in 2007. Gujarat International Finance Tec-City is today India’s most ambitious project for developing the global finance services industry and is presently under construction. It is being developed with the support of a variety of stakeholders from the public and private domain. Apart from this, the Delhi Mumbai Industrial Corridor (DMIDC) is developing five smart cities, which includes Dholera in Gujarat, Shendra-Bidkin in Maharashtra, Vikram Udyogpuri Township near Ujjain in Madhya Pradesh, Integrated Industrial Township in Greater Noida in Uttar Pradesh and Gurgaon in Haryana.

The government on June 25, 2015 launched three missions aimed at ‘heralding a new urban era’. These included Smart Cities Mission, Atal Mission for Rejuvenation and Urban Transformation (AMRUT) and Housing for All. These succeeded the government’s earlier move to allocate a distinct number of cities for each state in India. Uttar Pradesh and Tamil Nadu lead the pack in terms of being given the opportunity to nominate the maximum cities that are 13 and 12 respectively for developing them into smart cities. Smaller states in terms of urban agglomeration and populations have been allocated less than two smart cities each. However, the looming concern remains in the implementation of this dream project. It is because INR 48,000 crores has been allocated for 100 cities under Smart Cities Mission over next five years. A simple back of the envelope calculation tells us that this would be 9,600 crores every year and an average of 96 crores for each city every year.

With the kind of infrastructural finance requirements, the implementation will be extremely undermined with the present allocation. There is a need to look at Public Private Partnerships (PPP) model with reviewed risk allocations to stakeholders. Also, Real Estate Investment Trusts (REIT) could play a major role in pooling in of investments in the real estate sector. Similarly, the Pooled Municipal Debt Obligation (PMDO) facility can be used to effectively allocate resources for urban development. The financial resources will remain a key determinant for the overall success of the Smart Cities Mission.

Another struggle of the cities today is that of a faulty vision that arises due to top-down planning. It was even strongly articulated in a speech by PM Narendra Modi at the launch of Smart City Mission that a city should be driven by its residents and city leadership and not by the private property developers. Therefore, envisioning the city, financial requirements and ground level implementation are the three primary factors that will determine the fate of urban development in India over next decade. Failing in any one of the above will be detrimental to the overall cause of urban development in India. An example could be, the Delhi BRTS (Bus Rapid Transit System) where explicit inspiration was derived from a similar system in Curitiba, Brazil, without realizing the urban density and requirements of the residents of Delhi. Here a failure of envisioning, as well as of resident requirements, resulted in a redundant urban transportation system.

The Smart City Mission will only be successful if the government and leadership at all levels take into account these three factors in planning for India’s urban future. A synergy between efficient regulatory authorities, residents’ needs, and providers of urban services will thus improve the quality of governance and life in Indian cities.

Published in Business Insider on June 26, 2015. To know more