The healthcare challenge in India

Home The healthcare challenge in India 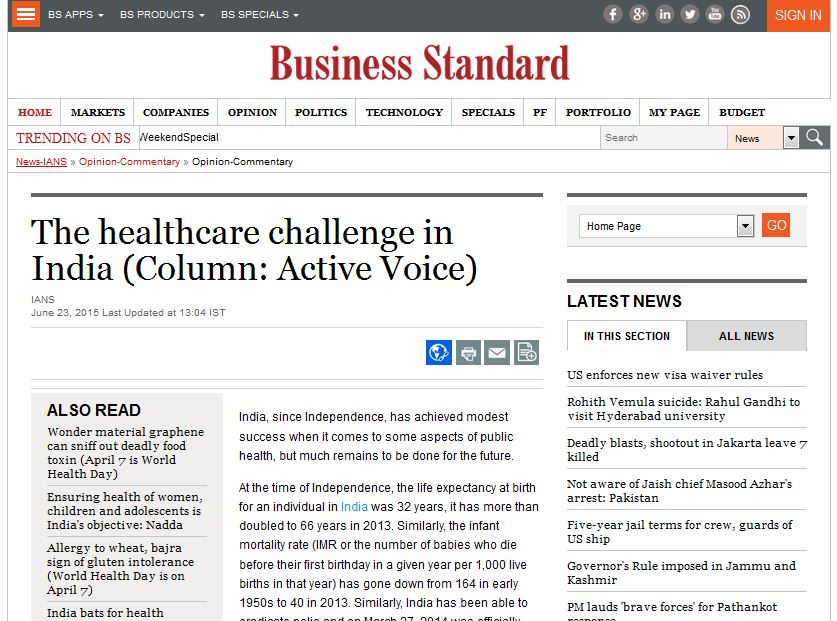 The healthcare challenge in India

India, since Independence, has achieved modest success when it comes to some aspects of public health, but much remains to be done for the future.

At the time of Independence, the life expectancy at birth for an individual in India was 32 years, it has more than doubled to 66 years in 2013. Similarly, the infant mortality rate (IMR or the number of babies who die before their first birthday in a given year per 1,000 live births in that year) has gone down from 164 in early 1950s to 40 in 2013. Similarly, India has been able to eradicate polio and on March 27, 2014 was officially declared polio-free by the World Health Organisation. India also has in the past been able to eradicate diseases like smallpox. The story of change has been overall encouraging but still much more remains to be done. International comparisons immediately raise concerns about the how badly broken our public health system is.

The fact is that almost half the children under five years of age are stunted. The IMR at 42 per 1,000 live births is high when one looks at international peers. The proportion of underweight children at 43 percent reflects a crisis of sorts because the figure for sub-Saharan Africa is 21 percent. The immunisation coverage of DPT

(diphtheria, pertussis and tetanus) is 72 percent in India which is almost similar to sub-Saharan Africa’s 71 percent. Similarly, more people are being diagnosed with lifestyle diseases like diabetes. There are close to 67 million people living with diabetes in India in the age bracket of 20-79 years according to international Diabetes Association (IDA).

The first is bettering the lifestyle choices that act to prevent diseases. India, according to a study published in Lancet in 2013 had an obese population of 30 million people just behind China’s 46 million and US’ 87 million. It is all the more striking as India is also home to 270 million people living below the poverty line. The prime causes of obesity, as identified by the study, include availability of cheap junk food as well as a sedentary lifestyle. Better nutritional choices, regular exercises, meditation, cycling and yoga can have positive benefits if done properly and in moderation. Health is not only about medicines and diseases but also about a feeling of positive well-being in life.

The second is with respect to access to healthcare. At present India has a three-tiered system of healthcare starting from the health sub-centres (HSCs) located at the village level. The second tier consists of public healthcare centres (PHCs) which serve as a referral unit for HSCs. The third tier consists of community health centres (CHCs) that have hospital facilities and serve as a referral unit for PHCs.

In addition, the government has around 20,000 hospitals that serve both the rural and urban populations. Added to this is the private healthcare system that ranges from quacks to hospitals with world class facilities. The private system is fragmented and largely present within and in the vicinity of urban agglomerations. In the future, access to these facilities will have to be re-looked at. These utilise the usage of technology for low penetration areas as well as newer access options in cities. Examples could be telemedicine in villages with problems of healthcare access and mobile vans for initial primary care in case of emergencies on the road in urban areas.

The third is understanding the link between water, sanitation and health (WASH). Almost 60 percent of the people who do not have access to toilets in the world live in India. This is a matter of grave concern. It is because this often leads to problems of public safety and public health. Public safety is impacted as often women have to go to the fields to relieve themselves and some gruesome incidents have happened in the past. Public health is affected adversely as in a densely populated country like India faeces often enter crops, wells, food chains and even to children’s hands leading to diseases of the intestine. It explains partly as why India’s children are malnourished. If a population has to be disease free, it has to focus on proper sanitation and sewage disposal mechanisms and at the same time, improving the personal hygiene of the people.

The fourth point is with respect to healthcare costs. With low insurance penetration, out of pocket spending on health as a percentage of total expenditure on health remains high in India (60 percent), higher than all the other OECD countries as well as China.

India will have to follow a multi-pronged approach if it has to move ahead on health outcomes. Preventive healthcare can be used a strategy but the healthcare systems as a whole needs to be improved over time. A healthy population is the bedrock of a competitive nation.

Published in Business Standard on June 23, 2015. To know more