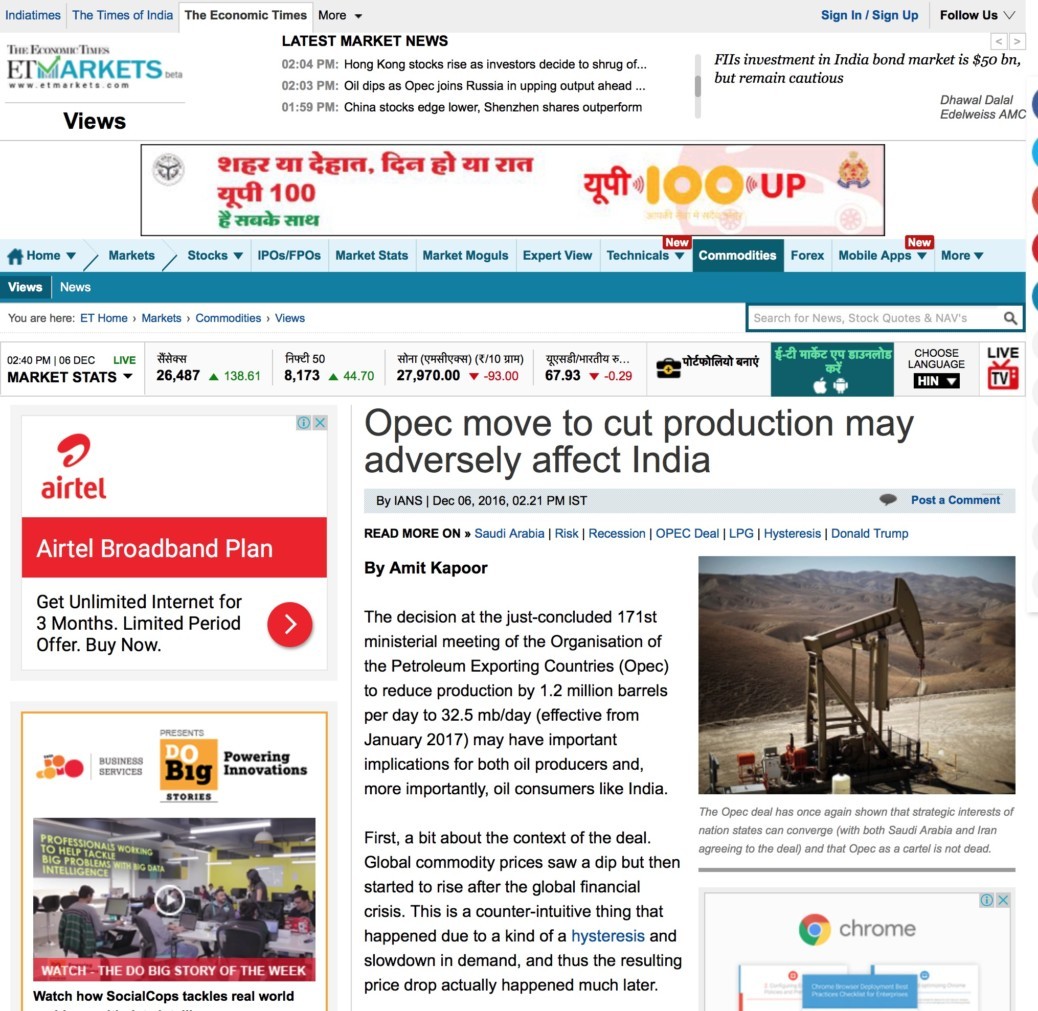 The decision at the just-concluded 171st ministerial meeting of the Organisation of the Petroleum Exporting Countries (Opec) to reduce production by 1.2 million barrels per day to 32.5 mb/day (effective from January 2017) may have important implications for both oil producers and, more importantly, oil consumers like India.

First, a bit about the context of the deal. Global commodity prices saw a dip but then started to rise after the global financial crisis. This is a counter-intuitive thing that happened due to a kind of a hysteresis and slowdown in demand, and thus the resulting price drop actually happened much later.

The prices peaked in 2012 when the Opec average yearly crude oil price touched a high of almost $110. Intra-day prices reached much higher. Economies exporting oil at that time were making merry. But then prices began to plummet — touching a low of $40 in 2016. The intra-day prices dropped to much lower levels.

A pertinent question to ask at this juncture is: What were the factors at play which resulted in the price rise and later the collapse? Factors which had a bearing on the latter were oversupply in the international markets due to decrease in Chinese demand as well as the slowdown in the developed world and the ensuing impact on world trade.

Also important was the shale oil boom in the US which requires less upfront investment and helped pushing up oil supply. Another factor was the removal of economic sanctions against Iran and it consequently ramping up production. Finally, the Opec members not being able to reach an agreement was yet another factor for oversupply. Due to all these factors, oil prices have been at rock bottom level for almost two years.

The winners and the losers of this overall situation have been clearly a distinct set of countries. Oil-consuming countries like India (importing about 81 per cent of its energy needs) have seen a windfall due to this almost threefold reduction in prices. On the other hand, economies like Russia, Opec members and countries like Venezuela (all big oil producers) have borne the brunt of the price collapse. These economies have seen job cuts, have been undergoing economic turmoil and are now in the throes of deep recession.

Saudi Arabia, the biggest Opec member, has seen a reversal of economic strategy away from a very oil-dependent future to one which is seen diversifying its bets. Part of the process is also privatisation to a limited extent of Aramco, the world’s biggest oil company that is slated to go for an IPO in the near future.

On the consumer side, the Indian windfall has added to fiscal space in its economy and let it choose where to look for its energy needs.

After the Opec decision, the price of crude oil has already inched upwards and is now hovering around the $50 mark. It would be more interesting to see how the countries (especially producers) outside the Opec respond to this curb on production levels. Russia already is looking at limiting supplies. A concerted effort from oil producers can have a critical impact on the economies of oil-consuming economies of the world.

The macro-economic developments have given policymakers in India and elsewhere adequate leeway to invest in alternative forms of energy as well as invest in development of CNG and LPG. A recent report in The Economist points to this.

An uncertainty for India is the election of Donald Trump as the new US President. This has has already seen capital outflows from developing countries like India to the US. Given India’s macro-economic situation, the most pertinent thing for New Delhi to do at this juncture is to plan for the future with a lesser dependence on fossil fuels, especially crude oil. But that is easier said than done.

The Opec deal has once again shown that strategic interests of nation states can converge (with both Saudi Arabia and Iran agreeing to the deal) and that Opec as a cartel is not dead. It still is important in deciding the price of oil, impacting geopolitical outcomes in several countries. Countries like India must invest in cleaner technology development, reducing their overt dependence on oil — else they risk being adversely affected each time the price of crude oil starts to rise.

Published in Economic Times on December 6, 2016. To know more