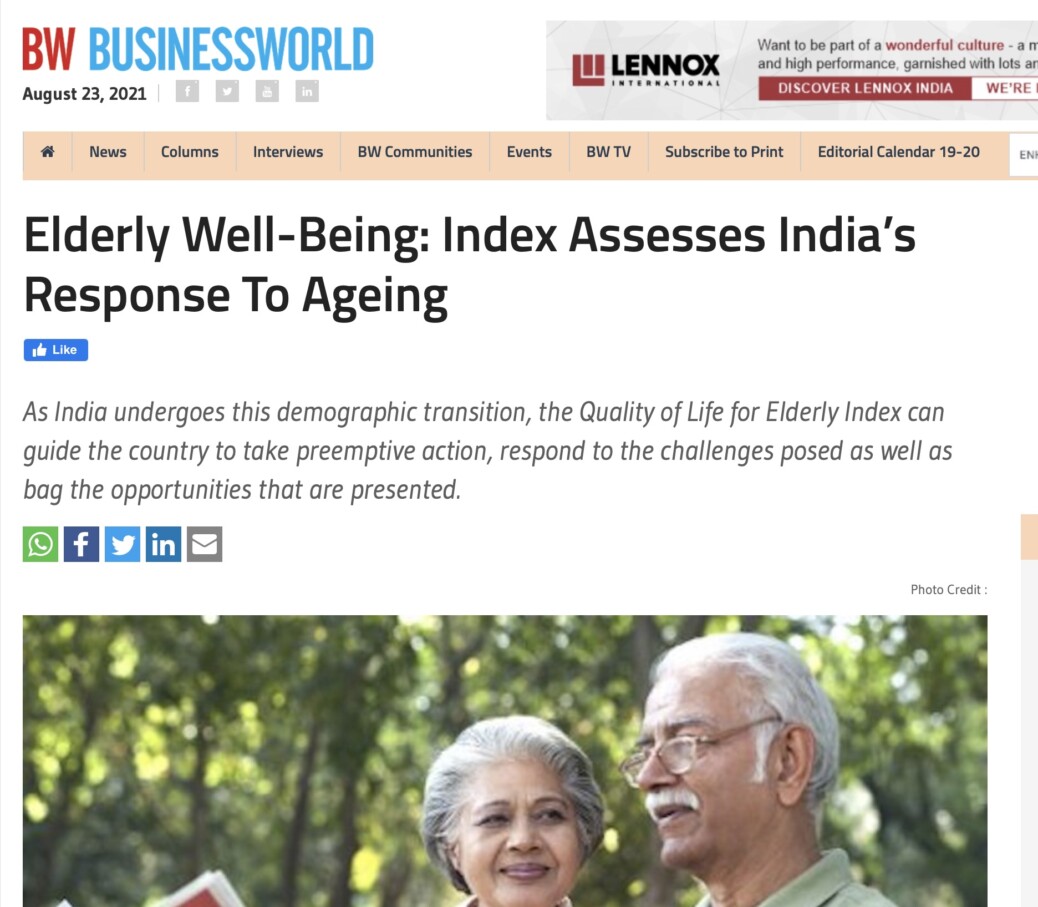 As our lifestyles transform due to social, economic and other factors, an offshoot of this change is a fall in fertility rate and rise in life expectancy, resulting in an increase in the proportion of elderly population, as seen all around the world. The phenomenon is occurring at a more rapid pace in developing countries. In India, the old age population is currently 60 million, but the World Health Organization projections estimate it to rise above 227 million by 2050, and the old-age dependency ratio to increase from 9.8 to 20.3.

Although India is a young country in comparison to the rest of the world, the rapid demographic transition warrants immediate attention of policymakers towards the well-being of the elderly today as well as towards strengthening the existing systems to ensure well-being of elderly in the future. The youth population today holds the potential for bringing demographic dividend to the country, but the same population constitutes the biggest cohort, which will enter old age in the coming decades, thereby increasing the share of older people in the future. Hence, we need to begin preparing for that future; at the same, we must tend to the needs of the elderly today, not only because their level of well-being is indicative of how well our systems function but also because no one should be left behind in India’s developmental journey.

As a first step in this direction, the Economic Advisory Council to the Prime Minister (EAC-PM) has released the Quality of Life for Elderly Index, submitted by the Institute for Competitiveness. The index evaluates the quality of life of the elderly across all the states and union territories of India. Since ageing patterns vary from state to state, the study also documents the regional patterns of ageing in assessing the overall ageing situation in India.

The policy discourse on old age usually concentrates on fiscal burdens that ageing incurs on an economy, but the index expands the discussion, as it also looks into the aspects of social well-being and provision of health systems as crucial components of old age. In the process, the index also challenges the notion of older population being a burden. The study recognizes that the very definition of old age needs review as evolving scientific knowledge and technology can ensure a healthier life in old age and promote active ageing. A healthy elderly cohort in turn can be a valuable resource and contribute to India’s growth. In this light, the index focuses on active ageing and evaluates India’s performance in facilitating active ageing.

The scorecard and ranking system of the study enables comparison among the regions, and guides governments towards data-driven policy decisions. To ensure a fair comparison, the study divides states into four categories- Aged states (having more than five million Elderly), Relatively Aged States (having less than five million elderly), Northeast States and Union Territories.

As India undergoes this demographic transition, the Quality of Life for Elderly Index can guide the country to take preemptive action, respond to the challenges posed as well as bag the opportunities that are presented.

The article was published with Business World on August 16, 2021.