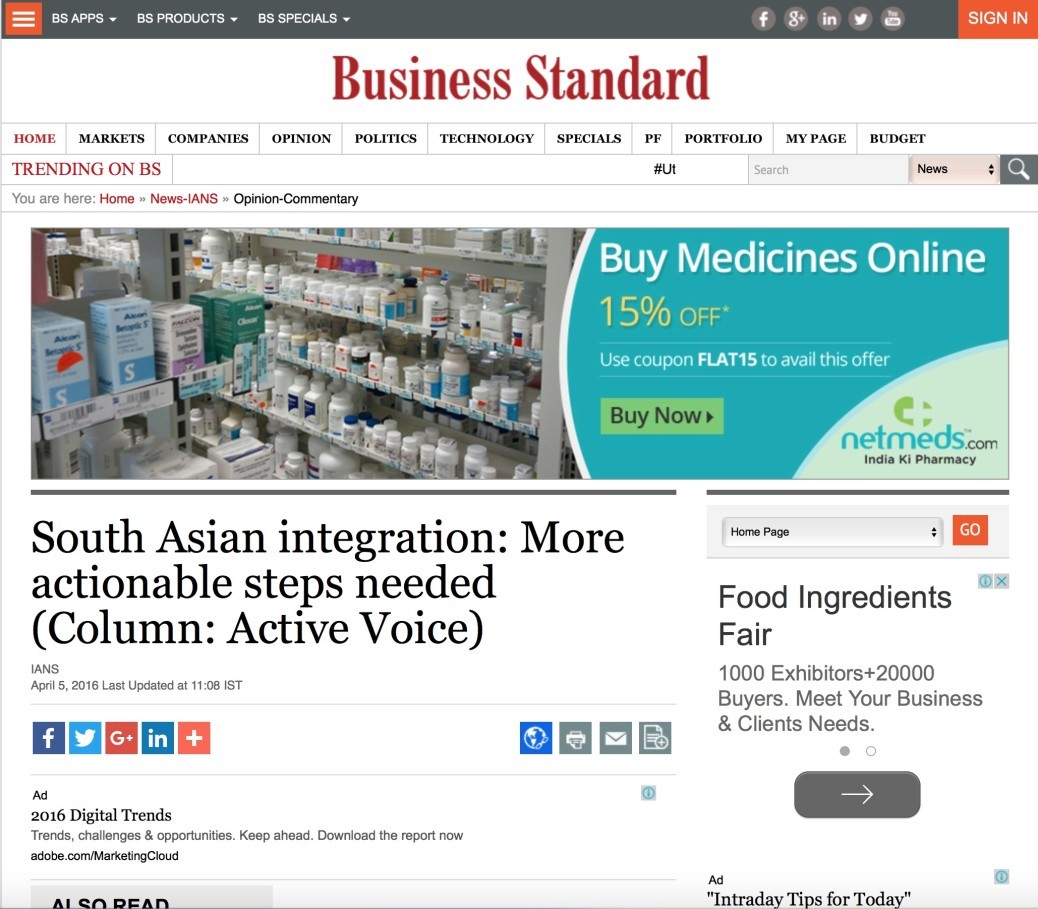 One of the positives of the present dispensation in Delhi is described as its pursuit of an active foreign policy. Some also describe this as all too proactive. However, for all the criticism, India has done well overall in its foreign policy engagements, the most recent visits of Prime Minister Narendra Modi being to Belgium, the US and Saudi Arabia.

A crucial part of the foreign policy is driven by foreign trade and geography – and this is where India is looking at its neighborhood for development. A recent publication from Observer Research Foundation (ORF) titled “Neighbourhood First: Navigating Ties under Modi” brings together critical thinking on both foreign policy and geo-economics and issues about development to the fore.

The geographic expanse covers the seven SAARC nations, Afghanistan to the west and Myanmar to the east. The narrative at present is driven by concerns of development and trade over expansionism which is where some would argue India is trying to use its benign power status to look for development reforms.

Regardless of the growth, there are profound problems facing the region. South Asia is home to 23 percent of the world’s population and yet accounts for less than 3.5 percent of the global GDP. A part of what explains this is the political and economic choices that leaders of different nations within the region have individually and collectively made over the decades.

Political strife, intra-regional conflicts, security problems, lack of trust, and thereby less trade integration, have all contributed to South Asia being one of the most autarkic regions for international trade. Both inter-regional and intra-regional trade remains a key impediment to not only economic development and social progress but also explains conflict within the region. These cannot be corrected immediately. All this will take time, but the direction should be positive.

Trade as a percentage of GDP (in 2014) is not even high for countries as small as the Maldives (76 percent) and Sri Lanka (74 percent), which have small overall GDP. Contrast this with some of the East Asian and ASEAN economies like Singapore (252 percent), Hong Kong (252 percent), Vietnam (160 percent) and Malaysia (135 percent). The results are in the open for all to see.

This is where India and its neighborhood can look at the development experience of other regions for greater growth and prosperity. The open model of trade growth first demonstrated by Japan and later by South Korea and China has helped move millions of people out of poverty and expand their choices in life.

A similar if not the same model can be adopted in the South Asian countries. The ORF report in this context becomes important and brings to the fore the thinking behind such an endeavor and the likely consequence that follow. It would start by being more open to ideas, trade and movement of people both within and outside the region. Along with this, more transparent and accountable institutions and greater P2P (people to people), B2B (business to business) and G2G (government to government) linkages will make these geographically close countries even more proximate.

It could start with year-round interactions of people, businesses, and governments within the region. The idea of establishing a South Asian University was a great first step to understanding and gaining from each other’s ideas, cultures, and traditions. More such measures and initiatives are needed for a greater intra-regional cooperation.

In the years ahead a proactive political, social and economic consensus is needed for greater integration with the region. The governments of the individual countries will do well to initiate the dream of a prosperous and more open South Asia. It will start with the present thinking being concretised into actionable steps and execution over the longer time frame.

Read the original article published in Business Standard on April 5, 2016.