Cities, Creativity and Innovation are Interlinked, Here’s how 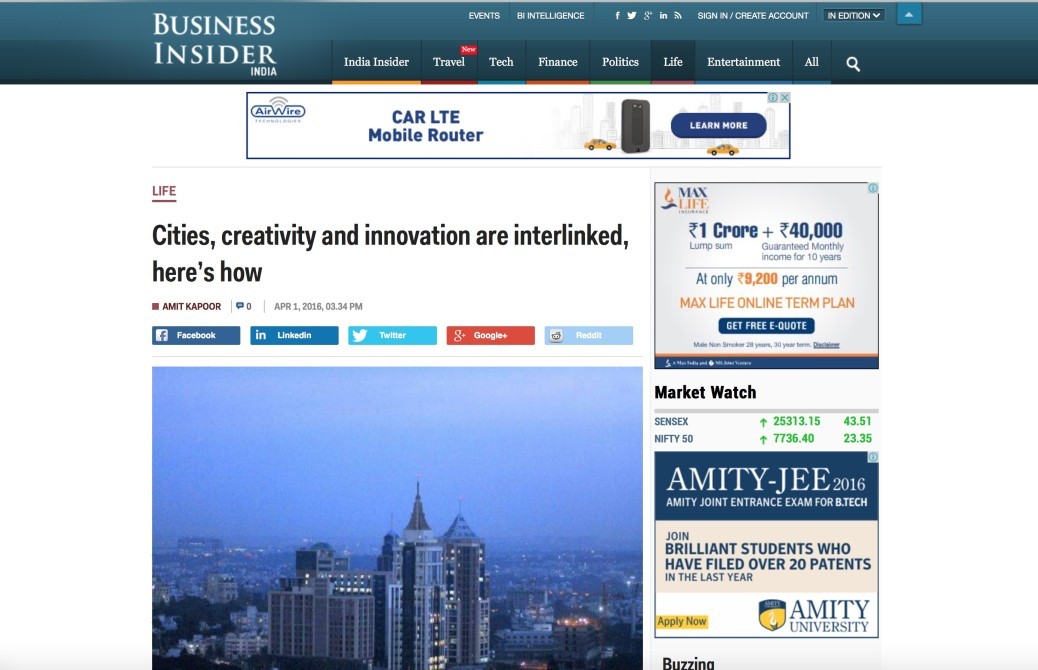 Cities, Creativity and Innovation are Interlinked, Here’s how

Cities and creativity are crucial areas for study in isolation, but when combined they yield some fascinating insights. It is because cities have always been areas where new ideas have been explored and put to the test. An early example could be Athens where several ideas of mathematics, Western philosophical tradition and science took shape and evolved.

Another view for understanding why cities and their relationship to creativity are important is because of a utilitarian perspective. Bolstering this argument is that all the modern amenities that we take now take for granted like the computer, mobile phones, televisions, etc. were once just plain creative ideas. They were codified by the intellectual property rights system which finally were innovated upon to yield compact devices/machines that we so much take for granted now. A lot of scientific progress is based on codifying creativity and making it available for the betterment of society.

Some important questions merit attention. These include among other things understanding as to what makes cities creative? In other words, is there geography to genius? Also, another related question is: are all cities creative all of the time? And finally are all creative cities innovative.

The first one is a difficult question to answer precisely. A plethora of philosophers to modern day city scholars and researchers are engaged in answering that very question. A recent book titled ‘The Geography of Genius’ offers fascinating insights into what is creativity and what is the role that cities play in fostering creative geniuses. The book takes a historical nose dive to look at eight places where remarkable creative periods have been observed in distinct periods. Some of these include the ancient Athens, medieval Florence and the colonial Calcutta that produced some of the most creative individuals. The Indian example of Calcutta in the 19th and 20th like the others offers rich insights into creativity amidst chaos.

A simple answer to the complex question of the geography of genius can be people. But what explains that only certain cities over time and space have had an outburst of creative expression while others have been mostly dormant to the creative outpourings remains a fundamental question? It turns out that particular institutions and the broader political and social reality (termed here as environment/ culture) make cities more attractive to people who are creative. But then there is a question what attracts them in the first place. Relative peace and stability, tolerance and presence of talent can be viewed as factors that have a bearing on decisions of individuals to live in a particular city.

The second question about creative output with respect to time is a bit easier to answer. Not all cities are creative all of the time. Kolkata now is not regarded as creative as it used to be at the turn of the previous century or even earlier. Also, the book mentioned above has only a handful of cases from among a vast number of cities one observes in the world.

Creative expression regarding ideas, music, literature and in a broader sense culture has had a profound change on how the organization of societies takes place and how people live. However, it is interesting to observe that decay in creative output is also a feature of creative cities. Thus, when we talk about places like Silicon Valley we often believe it is going to be at the forefront of technological innovations. The fact is in the future this may indeed see decay and some city might just take its place.

The final question on creative cities being innovative can be thought as in this manner.

Creativity is a necessary condition for innovation but not a sufficient one. Innovation happens when diffusion or a new way of solving societal need emerges. A creative sketch may be pleasing to the eye but not necessarily innovative while an iPhone has a creative design as well as is an innovative product.

Cities that are creative tend to foster innovation and help in not just economic growth and betterment of creative individuals but also improvement of the well-being of the society at large. Overall, it is a fascinating area for research on how ‘geniuses’ are not born but rather a product of their interaction with their environment. The city remains a fundamental lived experience in understanding that interaction.

Read the original article published in Business Insider on April 1, 2016