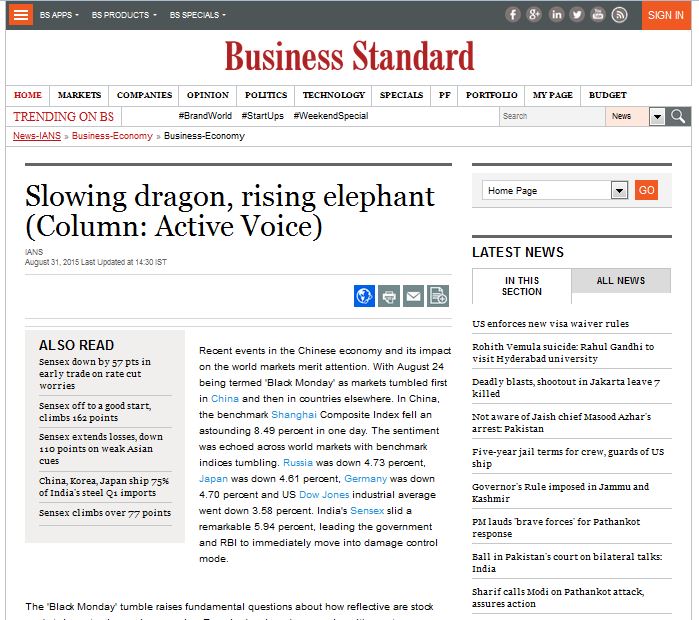 Recent events in the Chinese economy and its impact on the world markets merit attention. With August 24 being termed ‘Black Monday’ as markets tumbled first in China and then in countries elsewhere. In China, the benchmark Shanghai Composite Index fell an astounding 8.49 percent in one day. The sentiment was echoed across world markets with benchmark indices tumbling. Russia was down 4.73 percent, Japan was down 4.61 percent, Germany was down 4.70 percent and US Dow Jones industrial average went down 3.58 percent. India’s Sensex slid a remarkable 5.94 percent, leading the government and RBI to immediately move into damage control mode.

The ‘Black Monday’ tumble raises fundamental questions about how reflective are stock markets in portraying real economies. Even in developed economies with greater transparency and accountability the answer is difficult to guess. It is because the answer depends on many factors, including psychological ones. A reasonable away to look at the question in the hope of finding a solution is how and where people invest. In China’s case, some have argued that stock markets have historically been not very reflective. It is because the market capitalization as a percentage of GDP in China is even lesser than India and far lesser than advanced economies. Therefore, a better yardstick is to look at the movements in the housing markets. That market has not shown imminent worrying signs amid the investor fear being witnessed in the stock markets.

Nonetheless, post ‘Black Monday’ most markets around the world have recovered and were now closer to their previous levels. However, the incident has drawn the attention of policymakers, especially considering in continuation with the devaluation of yuan by two percent on August 11. Growth numbers, aided by currency devaluation and stock market volatility, have raised concerns about a deeper malaise in the Chinese economy. Due to the non-transparent nature of the Chinese government some even argue that the worst may be over. Others question the validity of official data and statistics.

With investment as a percentage of GDP on the decline while consumption as a percentage of GDP on the rise, this marks an important shift in China’s economy and this has a great bearing on the world economy in the future. China’s ongoing structural transformation from an investment to a consumption-driven economy is likely to cause some real changes in the world economy. Already, some of the effects are being witnessed.

The global commodity price crash is most likely driven by a slowdown in demand for raw material in the Chinese economy. The most vulnerable economies are the exporting ones that trade in raw materials with China. These include both economies that are closer home to China like Indonesia and Mongolia and far off commodity exporters like Australia and Brazil. The US and India are relatively in a better position as they do not export too much as a percentage of GDP to China (both lesser than 10 percent).

The concern now for most policymakers is ensuring a stable slowdown for the Chinese economy. India’s concerns at present are not so much with respect to the Chinese developments as they are with the developments in the United States. This is because the Federal Reserve can raise interest rates in light of its bettering domestic economy that could lead to possible damage. However, as economists like Larry Summers have argued, it seems unlikely in the wake of recent Chinese developments. Also, India is looking to leverage the opportunity for its economic growth. For economic growth, the pace of economic reforms in the coming years will be the deciding factor.

As RBI Governor Raghuram Rajan has said recently, “India is better placed compared to other countries with low current account deficit, and fiscal deficit discipline, moderate inflation, low short-term foreign currency liabilities, very sizeable base of forex reserves.” In the months ahead, the Federal Reserve’s actions could have a great bearing on emerging market economies like India. Much will depend on the how well India is geared up to meeting these challenges.

Published in Business Standard on August 31, 2015. To know more