Can BRICS credit rating agency ever take off?

Home Can BRICS credit rating agency ever take off? 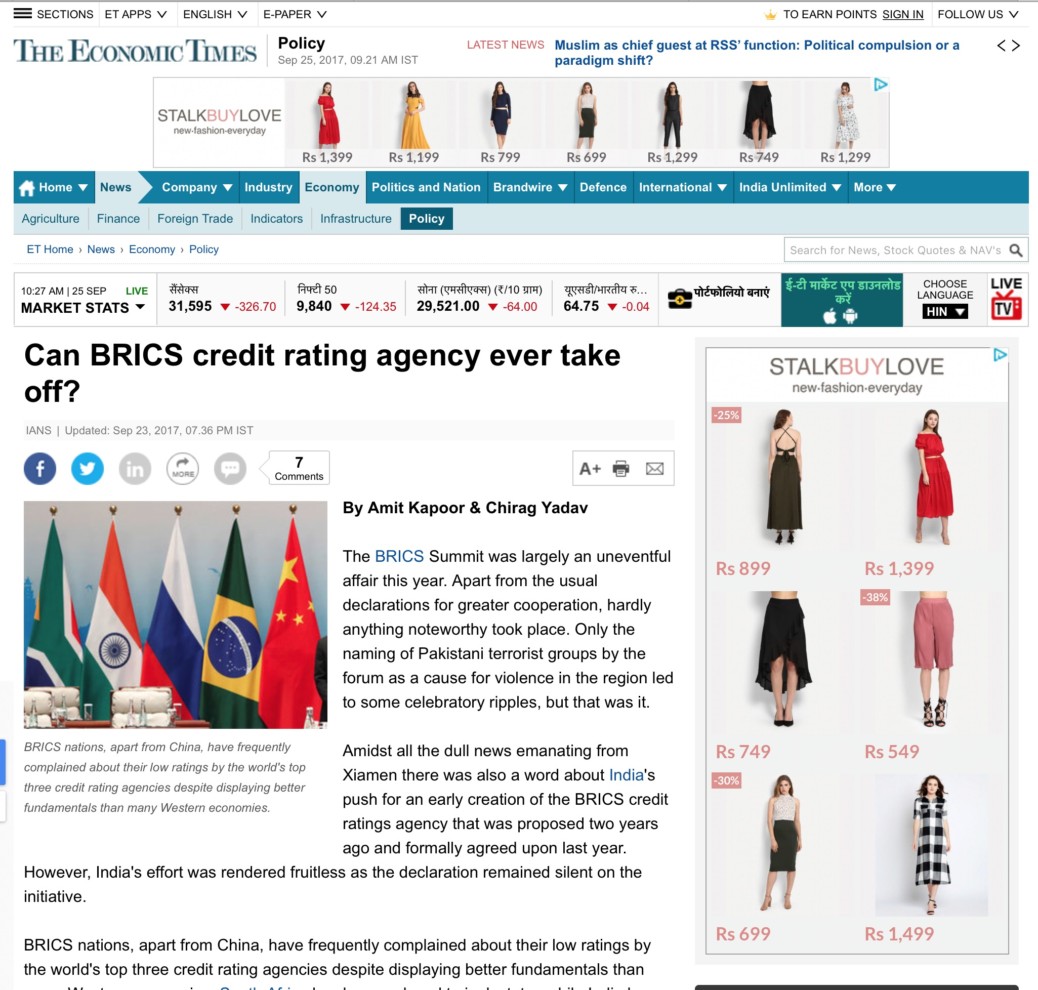 Can BRICS credit rating agency ever take off?

The BRICS Summit was largely an uneventful affair this year. Apart from the usual declarations for greater cooperation, hardly anything noteworthy took place. Only the naming of Pakistani terrorist groups by the forum as a cause for violence in the region led to some celebratory ripples, but that was it.

Amidst all the dull news emanating from Xiamen there was also a word about India’s push for an early creation of the BRICS credit ratings agency that was proposed two years ago and formally agreed upon last year. However, India’s effort was rendered fruitless as the declaration remained silent on the initiative.

BRICS nations, apart from China, have frequently complained about their low ratings by the world’s top three credit rating agencies despite displaying better fundamentals than many Western economies. South Africa has been reduced to junk status while India has been awarded the lowest rating possible. China has not been enthusiastic about the idea since it already enjoys higher ratings than its peers. Even in the last few years when India has outperformed China in almost all possible aspects, the ratings have not kept pace.

India has not shied away from expressing its displeasure at this anomaly. This year’s Economic Survey made it a point to highlight the “poor standards” of the rating agencies. The Survey pointed out that China was upgraded from A+ to AA- in 2010 and India has been kept stagnant at BBB- despite contrasting economic performances by the two countries. Since the economic crisis, China’s credit to GDP ratio has ballooned (from 140 to over 200) while its growth has fallen. On the other hand, India’s credit to GDP ratio has remained more or less constant (at 75) while growth has exceeded that of China.

During this period, India has also managed to moderate the government deficit from 8.3 percent in 2011-12 to 6.7 in 2016-17, boost its foreign exchange reserves to among the 10 highest in the world and narrow its current account deficit from 7.8 percent in 2012-13 to 1.4 in 2016-17. On the face of these trends, the credit ratings hardly make sense. The fault must lie in the methodology that is being used by these agencies as it clearly fails to reflect the real-world scenario.

The rating agencies repeatedly cite India’s low per capita income and high fiscal deficit as grounds for its low ratings. However, per capita income is a slow-moving variable. Even if India grows at seven percent per annum, it’ll take more than a decade for it to graduate from a lower-middle income country to an upper-middle income country. It makes little sense for any country with a sustained growth rate of 7 percent and strong fundamentals to have a stagnant low credit rating merely on account of its relatively low per capita income. With such a methodology, poor countries should just give up hope of seeing any improvement on their credit ratings for at least a decade or so. As for the deficits, the Indian government has stood strong on its unwavering commitment to a fiscal target over the last few years even at the cost of its growth rate, at times.

So, India’s issue with the methodology followed by these agencies, which bias the ratings against poor economies, is legitimate. Incorrect ratings have an impact on the money flowing into the economy since a lot of institutional investors depend on such analysis. Nevertheless, a new credit rating agency backed by the BRICS might not be the answer to the problem and will be beset with its own set of problems.

First is the clear conflict of interest. It will be a tough task for the investors, especially in the West, to believe that the ratings from the “independent” agency are being awarded with no governmental pressure and are politically impartial. Moreover, it’ll also have to overcome the conflict of interest problem that is already ailing the present agencies. The current issuer pay model is based on receiving payments from the institutions that are being rated. This makes agencies wary of downgrading their own clients. A model of charging investors will also not work for the agency given that it would be quite new to be trusted and ratings would be freely available anyway from established agencies of the West. So, escaping the problem of conflict of interest will be a major challenge.

Second, with the three major ratings agencies commanding more than 90 percent of the market, cracking it for a new entity will take a considerable amount of time and possibly never happen. The history of alternative credit agencies has not been promising. ARC Ratings established in 2013 and Global Credit Ratings established in 1995 are yet to start offering credit ratings.

A new credit rating agency by the BRICS will be a dud if these challenges are not addressed. The agency needs to be truly independent and based on a model which doesn’t base revenue on delivering the results that its clients want. An agency established by governments to rate other governments is not the best idea for such requirements. It can never be free of political interference and even if it manages to be so, the issuer pay model would still be at work.

More competition is always the key in such cases. Therefore, a better approach to taking on the “big three” in the market would be to decide upon a methodology that reflects the credit strengths of financial entities much more accurately and popularising it by implementing it across the local credit rating agencies of the respective BRICS nations. The next step would be to adopt a model that eliminates any conflict of interest and is more performance-based. Finally, there will a need to build a rapport among investors so that they can trust these ratings over that of the “big three”. All of this is easier said than done, but is surely bound to reap better results than establishing yet another agency that does nothing to improve the status quo.

The article was published with Economic Times on September 23, 2017.