The downfall of US competitiveness and the lessons for India

Home The downfall of US competitiveness and the lessons for India 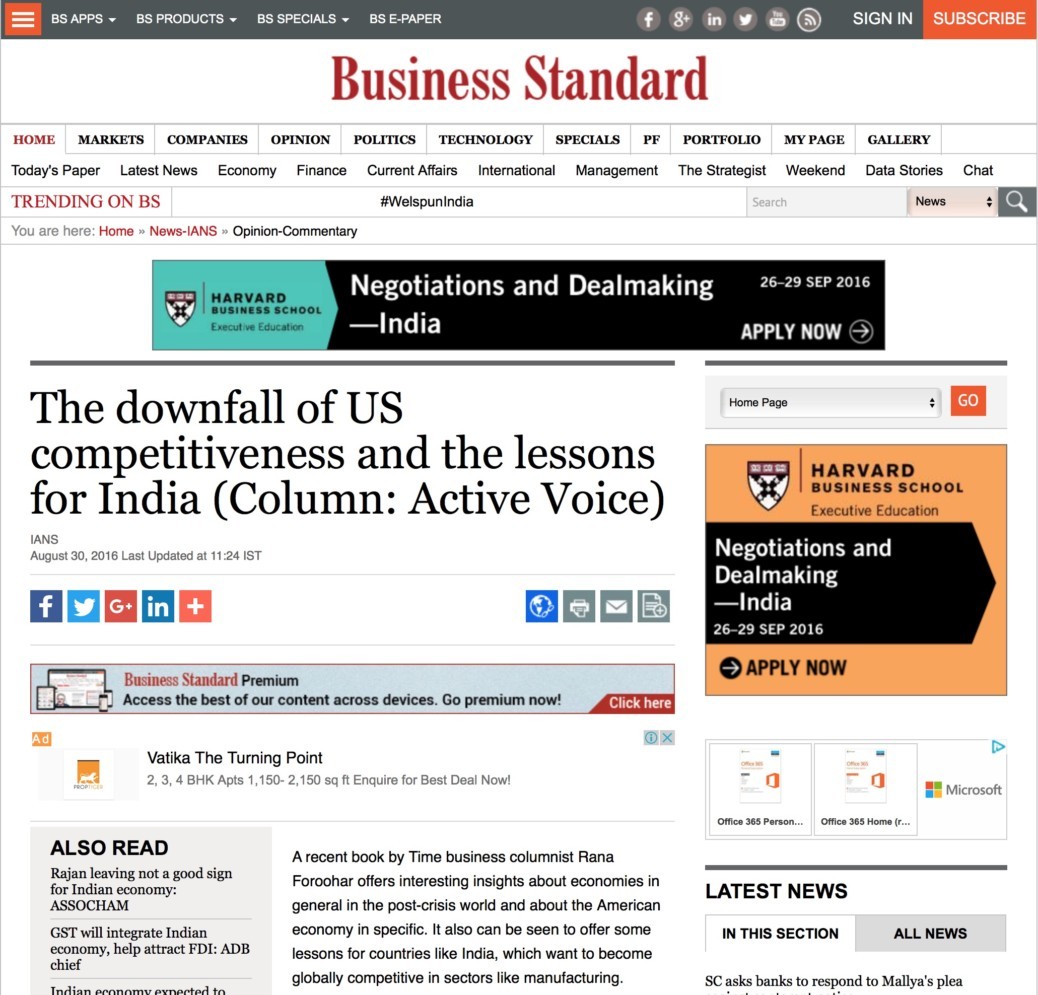 The downfall of US competitiveness and the lessons for India

A recent book by Time business columnist Rana Foroohar offers interesting insights about economies in general in the post-crisis world and about the American economy in specific. It also can be seen to offer some lessons for countries like India, which want to become globally competitive in sectors like manufacturing.

The book has interesting tales from the world of finance and business and tries to do soul searching for the fundamental reasons for the 2008 financial crisis. The book also has some jargon with terms like ‘makers’ and ‘takers’ for people who produce tangible and intangible goods and services and financiers. That’s in fact the title of the book.

Overall, the narrative is relatively well thought through with personal anecdotes and interviews making it an enjoyable read. The book has many ideas worth discussing but three stand out in the current context.

The first is the idea of financialization and focus on balance sheet solutions rather than solving real-world problems for customers and people. The mindset is pervasive, from defence establishments to business corporations, and the author does well to provide a historical account of how America came to be this way. The time studies of Winslow Taylor (1856-1915, considered one of the first management consultant) and an overt focus on imperfect mathematical models to look at complex reality have been the basis of this sort of mathematical thinking.

The “efficient market hypothesis” and focus on unfettered markets for every problem have caused much of the troubles that came to rock the Wall Street in the run-up to the 2008 crisis according to the author, who is also critical of the “markets know all” approach that has wreaked havoc on not just the way business is done but also on how common citizens live.

Financialization of business has meant that it is the takers who called the shots at major corporations, which has actually led companies to not focus on goods and services but on shareholder returns. Here, the author also takes up the example of several of America’s corporations and financial firms like GM, GE, and Citibank to reflect on the kind of decisions ‘takers’ made in the run-up to the financial crisis. Though the situation today does not appear to be similar in India’s case, it does offer some clues to Indian companies and markets to not mimic the American scenario.

The second idea extends the logic to focus on the financialization of education. This includes a critique of business education today. The author here cites the Chicago school and influence on both business education and corporate America. Also, the fundamental issues facing businesses are often those faced by companies which produce goods and service that are core to the business.

The author opines that in business education, the focus today is on tools and techniques rather than thinking about real world problems and how to solve them. This has meant that most business people today have backgrounds in finance and rarely know about products and processes. This has caused the paradigm of ‘shareholder wealth maximization’ at the expense of society at large. This also brings in the related issue of the role of business or corporation in society. The author rues how financial thinking is harming various sectors of the economy from pharmaceuticals to automobiles to petrochemicals to consumer electronics.

Third, there is also the issue of how America lost its competitiveness in sectors like automobile, industrial goods, consumer electronics and the like. Here, the author brings in the historical view with Project Socrates of the Reagan Administration that sought to identify the reasons for the downfall of American competitiveness.

Apart from costs, offshoring and the like and not investing in factories, R&D and innovation are seen as major reasons for the downside. Even Apple, a shining example of corporate excellence for many, has not invested in R&D, innovation, factories and product-centric exercises in spite of having more than $200 billion of cash overseas.

This again brings us to regulation and focusing on cutting the loopholes that businesses use to create value for just stakeholders but not society at large where they operate. This has important implications for developing countries like India, where regulation is still not as deep as it is in the US. Investing in R&D and innovation as well as factories by Indian and global corporations could be seen as a way to improve Indian competitiveness in the years to come.

Finally, the book proposes some solutions to America’s current economic woes. These include simpler but better-implemented regulation, less focus on corporate debt as compared to equity, rethinking the role of corporations in society and building a new growth model where the focus is on all stakeholders, not just a few shareholders. The book ends by recommending empowering of ‘makers’ who produce goods and services and make the company and the American economy competitive. It can well serve as a lesson for Indiato empower its ‘makers’ to make its companies, sectors and the Indian Economyas a whole competitive.

Published in Business Standard on August 30, 2016. To know more