Quality of life in Delhi worsens 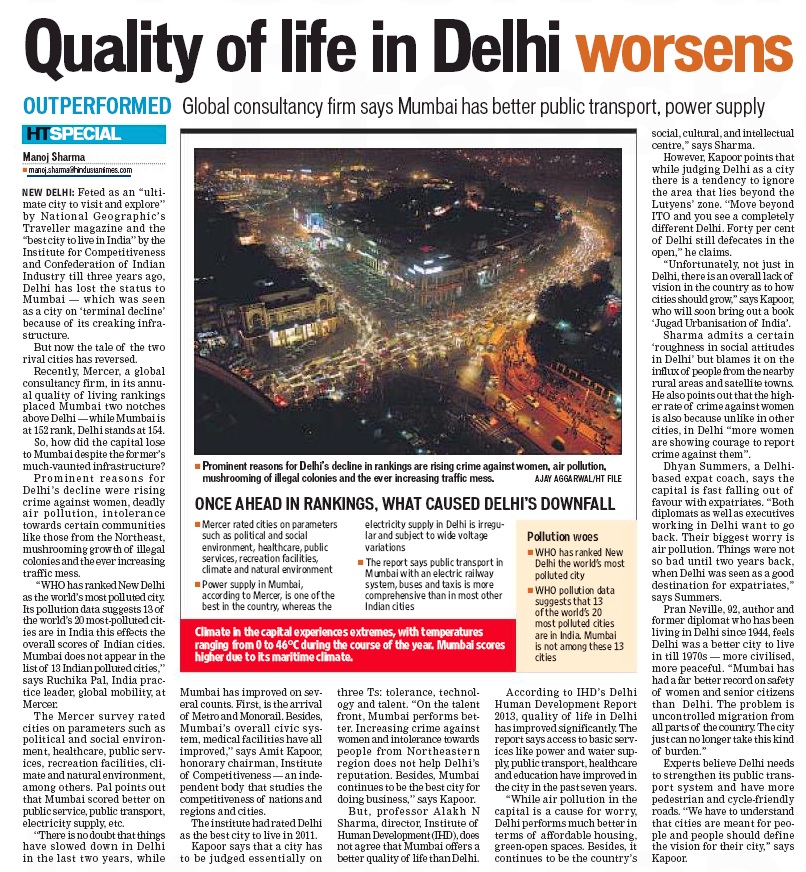 Quality of life in Delhi worsens

Feted as an “ultimate city to visit and explore” by National Geographic’s Traveller magazine and the “best city to live in India” by the Institute for Competitiveness and Confederation of Indian Industry till three years ago, Delhi has lost the status to Mumbai — which was seen as a city on ‘terminal decline’ because of its creaking infrastructure.

But now the tale of the two rival cities has reversed.

Recently, Mercer, a global consultancy firm, in its annual quality of living rankings placed Mumbai two notches above Delhi — while Mumbai is at 152 rank, Delhi stands at 154.

So, how did the capital lose to Mumbai despite the former’s much-vaunted infrastructure?

Prominent reasons for Delhi’s decline were rising crime against women, deadly air pollution, intolerance towards certain communities like those from the Northeast, mushrooming growth of illegal colonies and the ever increasing traffic mess.

“WHO has ranked New Delhi as the world’s most polluted city. Its pollution data suggests 13 of the world’s 20 most-polluted cities are in India this effects the overall scores of Indian cities. Mumbai does not appear in the list of 13 Indian polluted cities,” says Ruchika Pal, India practice leader, global mobility, at Mercer.

The Mercer survey rated cities on parameters such as political and social environment, healthcare, public services, recreation facilities, climate and natural environment, among others. Pal points out that Mumbai scored better on public service, public transport, electricity supply, etc. “There is no doubt that things have slowed down in Delhi in the last two years, while Mumbai has improved on several counts. First, is the arrival of Metro and Monorail. Besides, Mumbai’s overall civic system, medical facilities have all improved,” says Amit Kapoor, honorary chairman, Institute of Competitiveness — an independent body that studies the competitiveness of nations and regions and cities.

The institute had rated Delhi as the best city to live in 2011.

Kapoor says that a city has to be judged essentially on three Ts: tolerance, technology and talent. “On the talent front, Mumbai performs better. Increasing crime against women and intolerance towards people from Northeastern region does not help Delhi’s reputation. Besides, Mumbai continues to be the best city for doing business,” says Kapoor. But, professor Alakh N Sharma, director, Institute of Human Development (IHD), does not agree that Mumbai offers a better quality of life than Delhi.

According to IHD’s Delhi Human Development Report 2013, quality of life in Delhi has improved significantly. The report says access to basic services like power and water supply, public transport, healthcare and education have improved in the city in the past seven years. “While air pollution in the capital is a cause for worry, Delhi performs much better in terms of affordable housing, green-open spaces. Besides, it continues to be the country’s social, cultural, and intellectual centre,” says Sharma.

However, Kapoor points that while judging Delhi as a city there is a tendency to ignore the area that lies beyond the Lutyens’ zone. “Move beyond ITO and you see a completely different Delhi. Forty per cent of Delhi still defecates in the open,” he claims.

“Unfortunately, not just in Delhi, there is an overall lack of vision in the country as to how cities should grow,” says Kapoor, who will soon bring out a book ‘Jugad Urbanisation of India’.

Sharma admits a certain ‘roughness in social attitudes in Delhi’ but blames it on the influx of people from the nearby rural areas and satellite towns. He also points out that the higher rate of crime against women is also because unlike in other cities, in Delhi “more women are showing courage to report crime against them”.

Dhyan Summers, a Delhi-based expat coach, says the capital is fast falling out of favour with expatriates. “Both diplomats as well as executives working in Delhi want to go back. Their biggest worry is air pollution. Things were not so bad until two years back, when Delhi was seen as a good destination for expatriates,” says Summers.

Pran Neville, 92, author and former diplomat who has been living in Delhi since 1944, feels Delhi was a better city to live in till 1970s — more civilised, more peaceful. “Mumbai has had a far better record on safety of women and senior citizens than Delhi. The problem is uncontrolled migration from all parts of the country. The city just can no longer take this kind of burden.”

Experts believe Delhi needs to strengthen its public transport system and have more pedestrian and cycle-friendly roads. “We have to understand that cities are meant for people and people should define the vision for their city,” says Kapoor.

Published in Hindustan Times on March 16, 2015. To know more