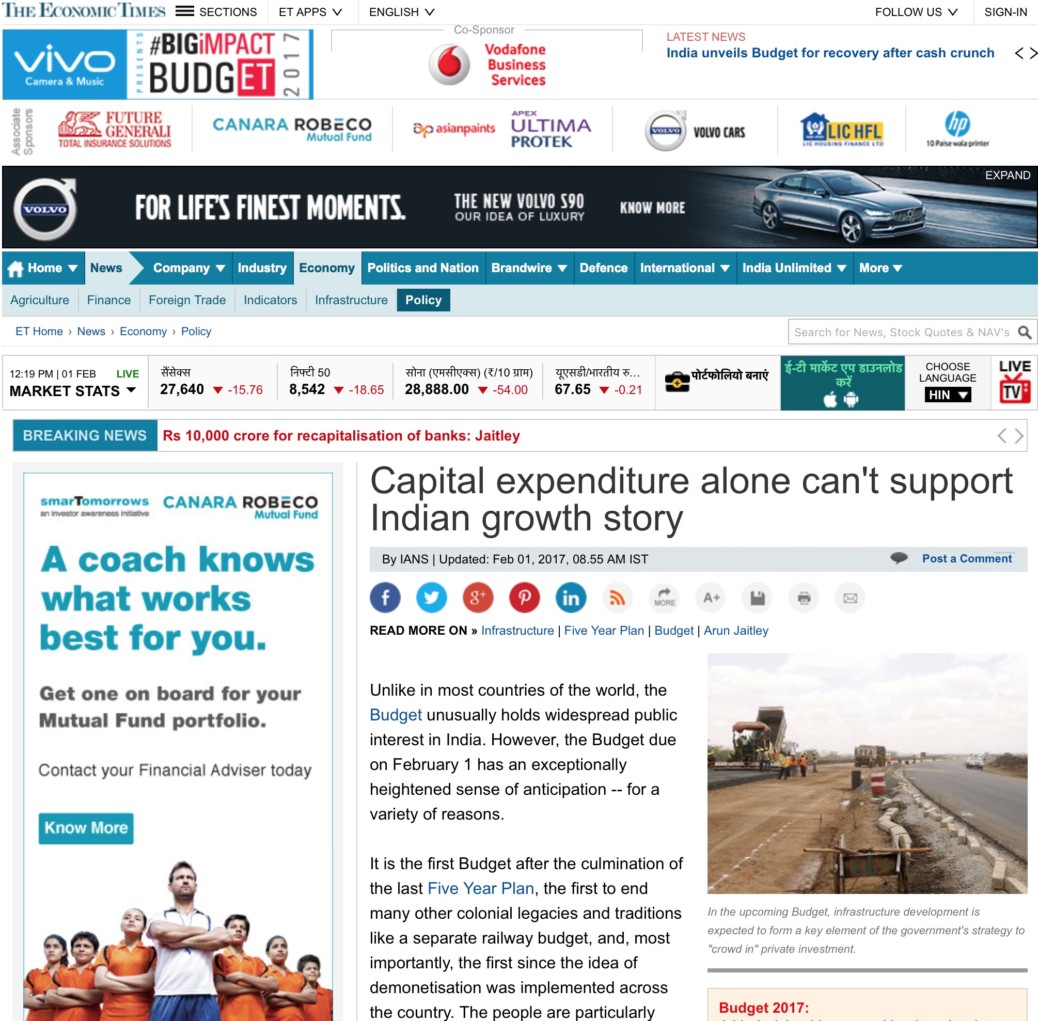 Unlike in most countries of the world, the Budget unusually holds widespread public interest in India. However, the Budget due on February 1 has an exceptionally heightened sense of anticipation — for a variety of reasons.

It is the first Budget after the culmination of the last Five Year Plan, the first to end many other colonial legacies and traditions like a separate railway budget, and, most importantly, the first since the idea of demonetisation was implemented across the the country. The people are particularly looking forward to finding out how the government plans to revive the economy from the demonetisation-induced shock it has received.

The Keynesian prescription of government expenditure seems to be the safest bet as the corporate sector is not enthusiastic enough to be driven by a monetary stimulus. It is expected that public expenditure will “crowd in” private investment, which has been at its weakest in recent times. Gross fixed capital formation has been on a downward trend since 2011 and in FY2016, private investment, which accounts for two-thirds of the total investment in India, contracted by 1.4 percent. Public investment, which rose by 21 percent during the same period, has been holding the fort and needs to continue doing so in the near future.

In the upcoming Budget, infrastructure development is expected to form a key element of the government’s strategy to “crowd in” private investment. Finance Minister Arun Jaitley had, at a seminar in China earlier this month, described plans to modernise the railways, expand highways, build more airports and sea ports and generate more power.

However, despite well-intended government efforts to boost private investment by such fiscal means over the years, the situation has not improved. The Budget needs to move beyond these stop-gap measures and address the root of the problem to revive private investment and, hence, the economy.

First and foremost is the problem of NPAs that the banks have accumulated and have been trying to combat through various legal channels like Debt Recovery Tribunals (DRTs), Lok Adalats and SARFAESI (Securitisation and Reconstruction of Financial Assets and Enforcement of Security Interest Act of 2002). However, the problem has not diminished in stature in any respect.
The Financial Stability Report released by the RBI in December 2016 revealed that there was a dramatic jump in NPAs from 7.8 per cent of advances in March to 9.1 per cent in September. Moreover, the amount of NPAs recovered by banks through the aforementioned channels during 2015-16 reduced to Rs 227 billion as against Rs 307 billion last year. Banks have become risk-averse due to the ballooning size of NPAs on their balance sheets and have, thus, become wary of extending loans to the corporate  sector.

This problem is the leading cause of muted investment sentiments in the country.

There have been murmurs in policy circles about the possibility of establishing a “bad bank” in the upcoming Budget that can take over the toxic assets of Public Sector Banks (PSBs). As a result, PSBs will have cleaner balance sheets and will be able to resume lending activities. Such moves have proven successful to revive bank lending amidst a recession in the Asian financial crisis of 1997 and US economic crisis of 2008.

A recent Moody’s report points out that delays in project approvals and land purchases by the government, complicated dispute-resolution mechanisms in the concession agreements and lower than expected revenue due to aggressive assumptions have led to the decline in investment in PPP projects.

The Budget can address a lot of these issues just by incorporating the recommendations of the Kelkar Committee on reviving and revitalising the PPP model. Incorporating features of the PPP model of developed countries like standardised project contracts, well-developed regulatory mechanisms, a large investor base and predictable project pipelines can also address some of the bottlenecks of the Indian framework.

The Budget can also ensure that funding provided under the National Investment and Infrastructure Fund (NIIF) is fast-tracked so that infrastructure projects are not stalled.
Finally, given the plethora of approvals that are required to kick-start a project, the long-standing demand of a single window clearance needs to be put in place. The digitalisation of some of these processes was a welcome move, but timelines for online clearances also need to be put in place. Clearing up such bottlenecks are necessary to restore investor confidence in the Indian markets and to send out a positive signal about the government’s seriousness in the matter.

With the expectation of a slowdown in the Indian economy, reviving private investment this year is critical. The government cannot continue to bank on capital expenditure to support the Indian growth story, especially if it aims to remain within its fiscal deficit targets. Reviving the infrastructure sector is a low-hanging fruit to boost private investment, and the upcoming Budget holds the key to it all.

The article was published with First Post on February 1, 2017.