How Competitive are Indian Cities?

Home How Competitive are Indian Cities? 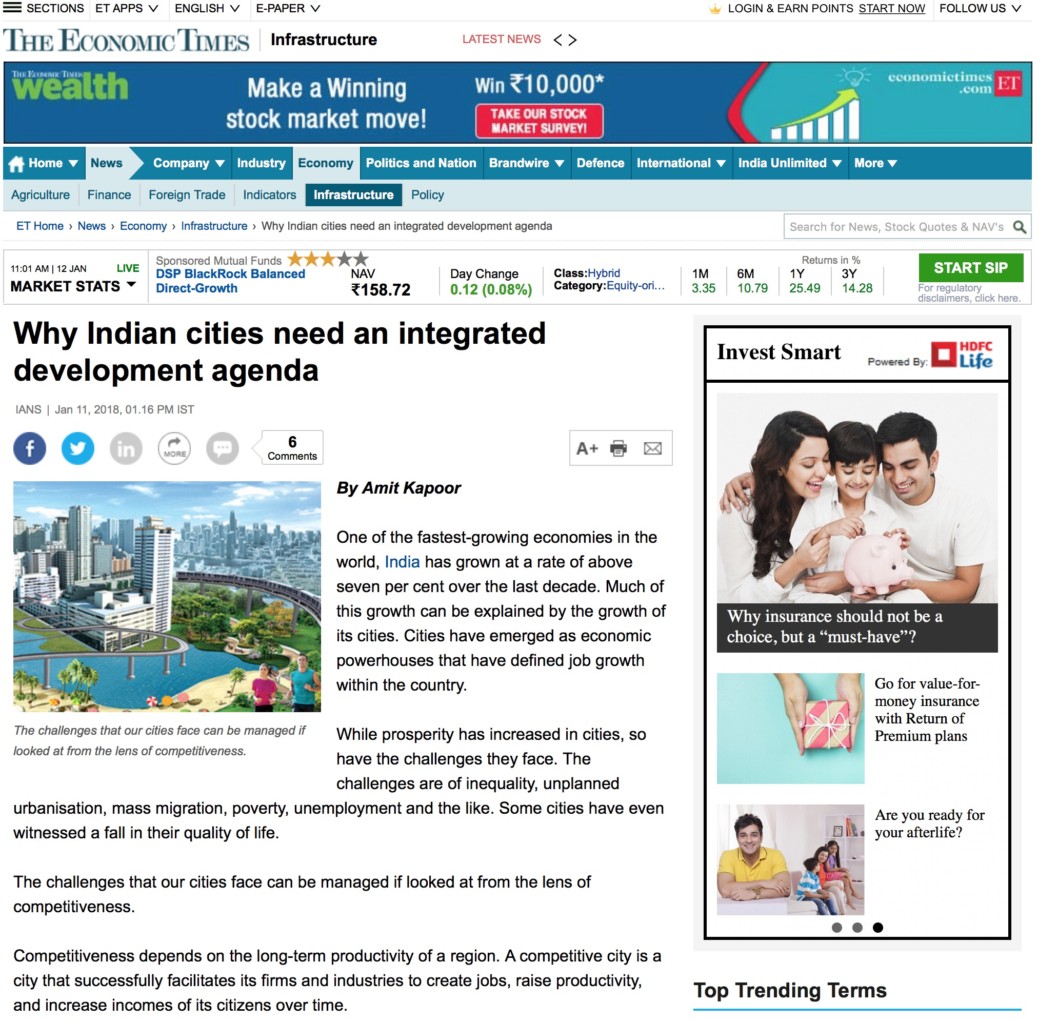 India is one of the fastest growing economies in the world that has grown at a rate of above 7 % over the last decade. Much of this growth can be explained by the growth of its cities. Cities have emerged as economic powerhouses that have defined job growth within the country.

Whilst prosperity has increased in cities, so have the challenges they face. The challenges of inequality, unplanned urbanization, mass migration, poverty, unemployment, etc. Some cities have even witnessed a fall in their quality of life.

The challenges that our cities face can be managed if looked at from the lens of competitiveness. Competitiveness depends on the long-term productivity of a region. A competitive city is a city that successfully facilitates its firms and industries to create jobs, raise productivity, and increase incomes of its citizens over time.

The analysis brings out some interesting insights.

First, the population of a city has a direct bearing on its level of competitiveness, i.e., big Indian cities are the most competitive ones too. This suggests that either population acts as an active resource (as a factor of production) and positively impacts the competitiveness of a city or that competitive cities tend to be more attractive to the general population.

The literacy rates in these cities are substantially higher than India’s national average. This coupled with their high population densities creates the best demand conditions in the country, thus adding to their competitiveness levels.

Presence of quality educational institutions in the big cities helps them attract the best talent from all over the country. This coupled with job opportunities they offer, help them retain such talent. The presence of such diverse talent helps in sustaining the growth, productivity, and economy of these cities. Sound financial infrastructure and relatively higher financial literacy levels further add to their competitiveness.

However, a large population is not always a boon. It creates challenges pertaining to the movement of people and goods and in the provision of basic services. Governments respond to such problems by improving service delivery and spending on infrastructure. It is not a coincidence that all these cities have operational metro rail networks and some of the best hospitals and airports in the country. These factor conditions significantly impact the competitiveness of cities.

In the short run, some cities may witness substantial improvements in their competitiveness levels. This may be because of improvement in their factor conditions and demand conditions. But in order to sustain or further improve their competitiveness levels, they must act on the other two pillars of Porter’s Diamond model i.e. context for strategy and rivalry, and related and supporting industries. It is worth noting that these two pillars are directly related to the level of industrialization, which cannot be increased overnight. So, the policymakers in the less industrialized states should look at industrialization as a long-term solution to make their cities more competitive. Cities from the states of Gujarat, Karnataka, Maharashtra, and Delhi perform well on these pillars. At the city level, old industrial and trade hubs such as Surat, Mumbai, Ahmedabad, Delhi perform well on these pillars.

Lastly, the level of cleanliness and sanitation and competitiveness are positively correlated. Cities from the state of Madhya Pradesh, which have shown exceptional cleanliness performance off late, have seen a rise in their competitiveness levels. Indore was in the news recently for deciding to name and shame people for spitting on roads. Tier 2 and Tier 3 cities like Chandigarh, Vadodara, Coimbatore, Surat, Mysore, and Rajkot have witnessed a similar fate. Big cities like Delhi, Bengaluru, and Chennai have not performed well on this front. Massive population, urban sprawl and limited public infrastructure are the possible reasons.

Our cities have focussed only on a few parameters of development and have ignored the others. For instance, despite being the most competitive cities in the country, the performance of big cities on certain parameters (such as environment, cleanliness, administration, etc.) is not up to the mark.

This probably signifies a lack of clear vision, and an integrated development agenda. Planning and development should take place with a clear set of priorities. One of the ways to tackle the problem at hand would be to strengthen municipalities by giving them more political and financial powers. China which has some of the world’s most competitive cities owes its success to such devolution of power. Participation of local population in planning and development process is another important aspect which is ignored in India. How India strengthens its cities will determine the strength of India’s growth story in the future.

The article was published with Economic Times and Millennium Post on January 11, 2018.