Building an entrepreneurial ecosystem in India 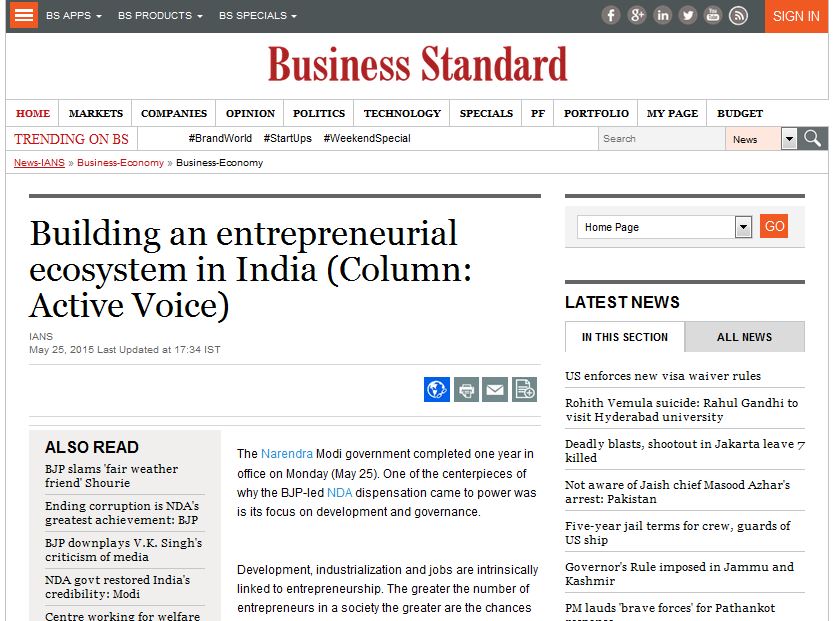 Building an entrepreneurial ecosystem in India

The Narendra Modi government completed one year in office on Monday (May 25). One of the centerpieces of why the BJP-led NDA dispensation came to power was is its focus on development and governance.

Development, industrialization and jobs are intrinsically linked to entrepreneurship. The greater the number of entrepreneurs in a society the greater are the chances of prosperity for the people residing in it. Entrepreneurship is critical as it also leads to innovation, betterment in the quality of life and greater social progress within a society.

Also, the same study used a measure of total TEA – Total Early Stage Entrepreneurial Activity. This is described in the study as the percentage of individuals in the sample age between 18 and 64 years who are in the process of either starting a new business or have recently started one. India performed relatively poorly on this measure in comparison to other BRICS countries, with only Russia behind it.

The data in enterprise surveys from the World Bank reveals an interesting story. The new firm density described by the enterprise surveys as number of new corporations created per 1,000 working age (16-64 years) individuals is found to be dismally low in India. On an average, we create 288 times less number of corporations per 1,000 working age individuals as compared to Hong Kong. In absolute numbers too, cumulatively from a period of 2004-12 the newly registered corporations were lesser in India than much smaller places like Hong Kong.

It brings one to a related issue of clusters and why India has faltered in a coherent cluster approach that enables enterprise creation. The fact that exports from the country have not been able to keep pace with the imports points to rising domestic demand. In addition, it also points to a failure on the part of India to ‘make’ and equally importantly ‘market’ our goods and services well in the global economy. While Indians (at least some of them) prefer to buy Italian leather shoes, the fact that we do not have companies/shoemakers in Agra selling at half the price shows our inability to market our products well.

A place where we have been able to do relatively well is the IT/ITeS segment with $98 billion exports in 2014-15. However, the fact remains in most export segments we have languished. The thrust on Make in India is thus understandable. Augmentation of large corporations with the development of MSME clusters, especially with newer enterprises and entrepreneurs, will go a long way in bettering prospects for the future. It will bring not only jobs but also raise the standard of living of some one million people that will enter the workforce every month for the coming decade.

It is worthwhile to keep in mind that Silicon Valley as a cluster arose out of specific historical developments in time (like access to VC capital, Stanford’s Institutional support, US defense spending). However a similar if not same ecosystem can be nurtured in the Indian context. It would require the following key elements:

The present scenario throws up some fundamental questions about the basis of entrepreneurship? In our view, specialization, innovation and marketing (SIM) should be the basis of entrepreneurship that would drive more value creation in the Indian context. Newer business models that focus on society, scale and simplicity would better the outcomes for India in the future.

Published in Business Standard on May 25, 2015. To know more