Adopt Sub Federalism as a means to transform Urban Governance 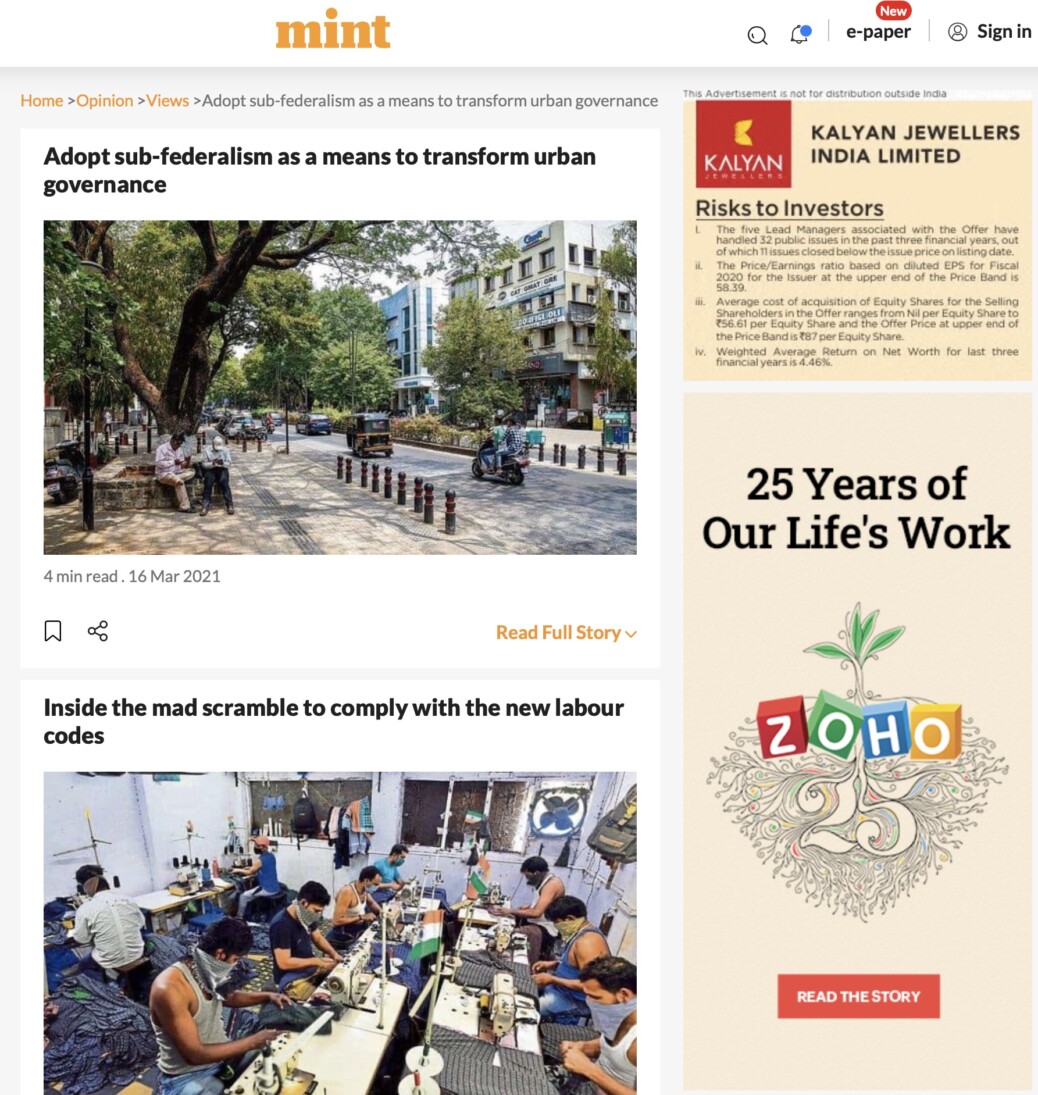 Adopt Sub Federalism as a means to transform Urban Governance

Back in 2015, Prime Minister Narendra Modi had shared his vision of leveraging cooperative and competitive federalism to achieve an all-round growth for India. The idea involves redefining the relationship between the Centre and States, such that different states compete with each other in achieving the common national goals. At the same time, it stresses the importance of coordination and consensus building between the Centre and States in achieving those goals. The mantra of cooperative and competitive federalism has been reshaping our governance mechanisms and policymaking across the board. To continue this momentum, the next necessary step is to foster sub-federalism, that is, extend the idea of competitive federalism to competition between states and cities, and between cities.

India’s urban governance and programming can especially benefit from a framework that incorporates sub-federalism into the cooperative and competitive federal structure. Urban development is one of the priority areas of the government, given the rapid urbanisation India is undergoing. With the current pace of urban expansion, we are expected to have the highest urbanisation rate by 2050. Undoubtedly, we have immensely benefited from urbanisation, as evidenced by our high economic growth, but it has also brought along a new set of challenges such as congestion, pollution, urban poverty, to name a few.  To combat these issues, the Government of India (GoI) launched a bouquet of programmes and schemes in the last 6-7 years, namely the Swachh Bharat Mission, Atal Mission for Rejuvenation and Urban Transformation (AMRUT), Smart Cities Mission, Pradhan Mantri Awas Yojana Urban (PMAY-U), Heritage City Development and Augmentation Yojana (HRIDAY) and Deen Dayal Antyodaya Yojana-National Urban Livelihood Mission (DAY-NULM).

These interventions recognize the importance of centrality, of having a macro vision that can guide the States in their planning and governance, but they also depart from the ‘One Size Fits All’ approach to give a greater reign to States in driving transformation. Accordingly, each State is expected to tailor their approach to suit the local needs, and also gear their policies towards a common national goal. Now, taking this idea down to the level of local governments, the Ease of Living (EoL) Index and the Municipal Performance Index (MPI) are two evaluative tools that quantify the development outcomes in cities to promote competition between cities and between municipal bodies, respectively.

The first edition of the EoL index was launched in 2018, which is followed up by the launch of its second edition, EoL Index 2020. The MPI 2020, launched by the Ministry of Housing and Urban Affairs is the first-ever of its kind for India. The idea of sub-federalism informs the framework of both these evaluative tools.

In the EoL Index 2020, 111 cities are ranked based on their development outcomes across four pillars of evaluation — Quality of Life, Economic Ability, Sustainability, and Citizens Perception Survey — covering 49 indicators examined under 14 categories. The MPI 2020, on the other hand, ranks 111 municipalities on the basis of their functioning evaluated across five verticals — Governance, Services, Finance, Technology and Planning — which further subsume 20 sectors and 100 indicators.

The MPI was carved out of the EoL index after the discussions and deliberations over the first edition led to the decision to disaggregate the assessment of outcomes and inputs into two separate indexes. Therefore, the EoL Index 2020 solely focuses on the development outcomes, while MPI focuses on municipalities or inputs that lead to the outcomes showcased in the EoL index. It can be said that the EoL Index and the MPI are two sides of the same coin. The ranking system employed in both induces the cities and the municipalities to improve their performance to climb higher on the rankings. While the EoL index helps administrations identify gaps in development, the MPI can aid them in locating the contributing factors within the extent of the municipality’s functioning.

The ranking system not only serves to promote competition, but also encourages peer-to-peer learning. The sectoral assessment enables cities to learn from the best practices of their peer cities in the areas they lag, and inversely, to serve as models of development in areas they excel in, for their peers to emulate. This is where the complementary ideas of cooperative and competitive federalism are tied together, and extended to the level of Cities.

The MPI also serves to strengthen decentralisation of governance by positioning municipalities as enablers of urban development. The 74th Constitutional Amendment accords Urban Local Bodies (ULBs) the status of the third tier of government, but because of the States’ power to decide the devolution of powers to the ULBs, urban governance has suffered from the lack of involvement and autonomy of the local government bodies in programming and implementation of urban policies. An assessment of the municipalities’ performance shall shift the focus on local governments, enabling States to empower them more. It will also allow for accountability, transparency and autonomy in their functioning. In this way, the EoL and MPI can unlock the potential of India’s urban governance capabilities.

As the majority of the population begins shifting to cities in the coming decades, cities would have a much greater role in determining our development trajectory. Against this backdrop, the re-imagination of our federal structure would be the key to achieving our broad developmental goals.