What is holding India Back?

Home What is holding India Back? 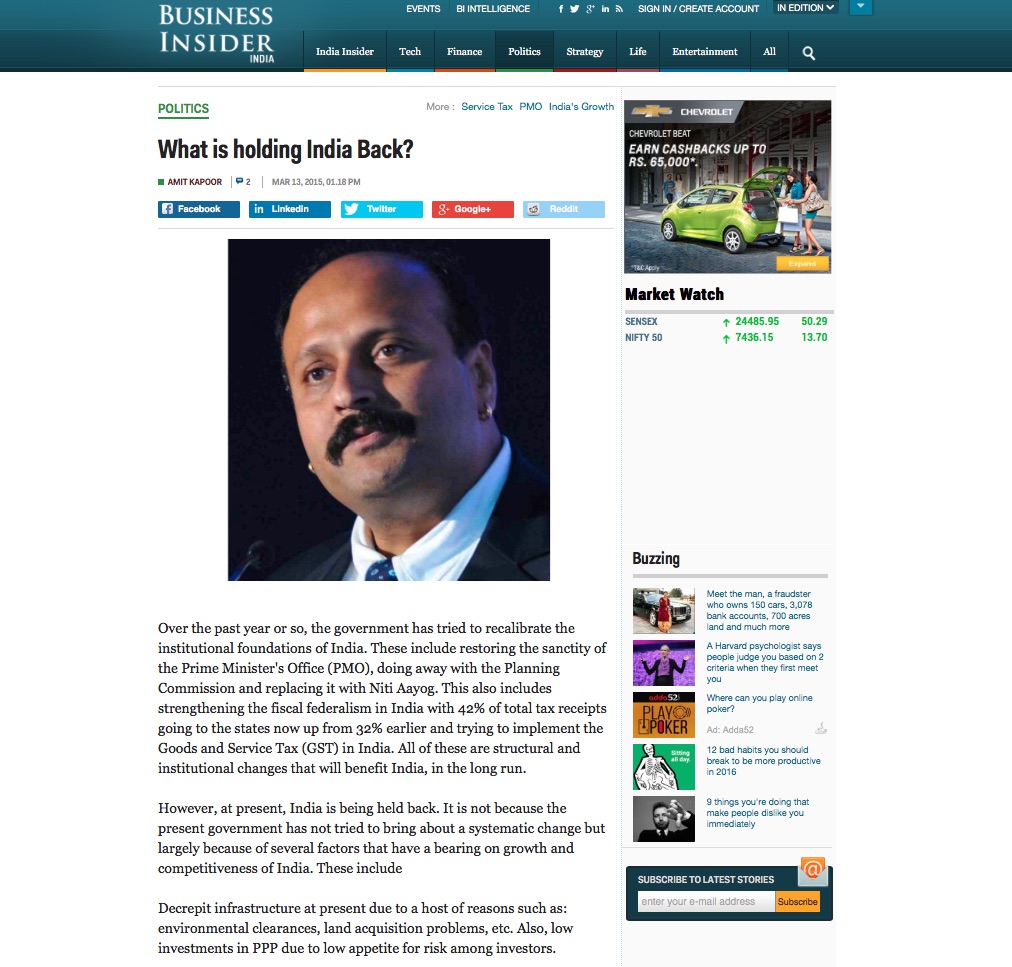 What is holding India Back?

Over the past year or so, the government has tried to recalibrate the institutional foundations of India. These include restoring the sanctity of the Prime Minister’s Office (PMO), doing away with the Planning Commission and replacing it with Niti Aayog. This also includes strengthening the fiscal federalism in India with 42% of total tax receipts going to the states now up from 32% earlier and trying to implement the Goods and Service Tax (GST) in India. All of these are structural and institutional changes that will benefit India, in the long run.

However, at present, India is being held back. It is not because the present government has not tried to bring about a systematic change but largely because of several factors that have a bearing on growth and competitiveness of India. These include

Decrepit infrastructure at present due to a host of reasons such as: environmental clearances, land acquisition problems, etc. Also, low investments in PPP due to low appetite for risk among investors.

A large unemployed and unemployable youth due to a wide disparity between theory and practice in education and formal employment. With the large number of students passing out each year and absorption rates in formal employment dismally low, young people are often pushed into what is informal employment. In turn, this often leads to a low aspirations and prospects for growth.

A third related problem is that of the enormous amount of regulatory and compliance issues. It starts from anybody wanting to start a business, have access to finance, etc. to filing his income tax returns once he starts a business. These take significant time and lead to an unease of doing formal business. Most businesses tend to remain informal, be structured differently, due to compliance costs and hassles.

Fourth, the bureaucracy at times is ill prepared for the challenges the economy faces. They are one of the most important pillars of our system and yet most times they are not given enough incentives be it in monetary terms or in terms of recognition, to show real performance.

Fifth, the legal functioning in the country is extremely slow, and this has to do with manpower and finances for the judicial system. The disposal of pending cases is reflective of the failings of our justice delivery mechanism. Due to these the investors are often shy of a country like India that has a rule of law but where the justice often is delayed to the point of being denied.

Sixth, the health system in the country is low cost but extremely inadequate for the population of our country. It is with respect to both infrastructure and the number of personnel in the sector. Our environment is extremely polluted inspite of the fact that environmental regulations and norms are often thrust on businesses. It shows a mentality of corruption to get somewhere around the regulation and make makeshift solutions to problems.

Finally, all these factors culminate into a lack of transparency and trust between the Government, Citizens, Institutions and Business. It leads to a mindset that very few things can change within the country inspite of whosoever comes in power.

For India to succeed the first and foremost thing is fostering a culture of healthy competition and productivity among its youth. It can only start when the focus is on merit and nurturing talent. It has the potential to lead to a meritocratic society one that has a strong work culture at its core twenty years from now. It can lead to unleashing the creative spirit of the people and in turn enterprises that they create.

Published in Business Insider on March 13, 2015. To know more