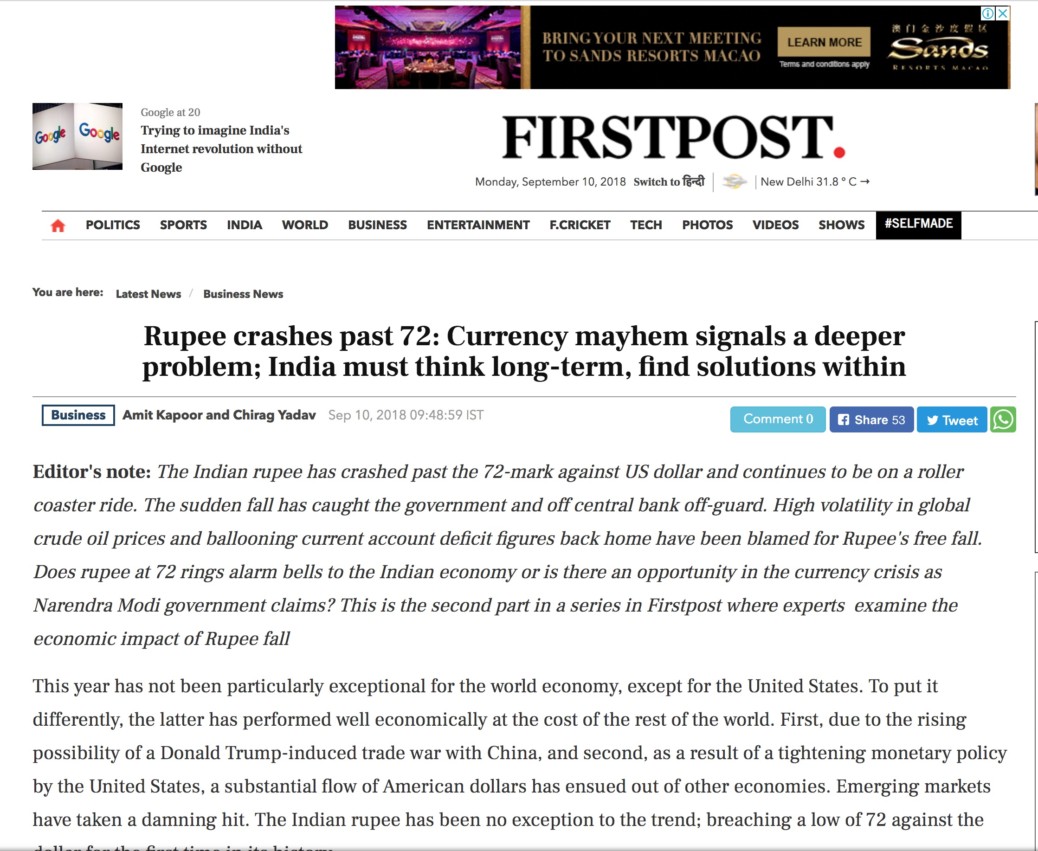 The Indian rupee has crashed past the 72-mark against US dollar and continues to be on a roller coaster ride. The sudden fall has caught the government and off central bank off-guard. High volatility in global crude oil prices and ballooning current account deficit figures back home have been blamed for Rupee’s free fall. Does rupee at 72 rings alarm bells to the Indian economy or is there an opportunity in the currency crisis as Narendra Modi government claims? This is the second part in a series in Firstpost where experts  examine the economic impact of Rupee fall

This year has not been particularly exceptional for the world economy, except for the United States. To put it differently, the latter has performed well economically at the cost of the rest of the world. First, due to the rising possibility of a Donald Trump-induced trade war with China, and second, as a result of a tightening monetary policy by the United States, a substantial flow of American dollars has ensued out of other economies. Emerging markets have taken a damning hit. The Indian rupee has been no exception to the trend; breaching a low of 72 against the dollar for the first time in its history.

Even though the Indian currency is not an anomaly, it has been the worst-performing currency in Asia after losing about 10 percent of its value since the beginning of this year. Meanwhile, other non-Asian emerging market currencies have put up an even poorer performance. Most significantly the Turkish lira, the Argentine peso and the South African rand have lost their value owing to a serious loss in confidence among investors.Representational image.

Undoubtedly, domestic factors have played a crucial role in the weakening of these currencies, but the significance of the strengthening dollar cannot be downplayed. The vulnerable Third World economies are not alone in being adversely impacted by the large-scale capital outflow of US dollars. In fact, even the advanced economies have been slowing down this year. America is the sole G7 country that is expected to grow faster this year than the last.

Economists often like to argue that a depreciating currency is not exactly problematic as it encourages a country’s exports. A weaker currency keeps the costs of domestic goods cheaper in the world markets and keeps overseas competition at bay. China is accused of deliberately keeping its currency undervalued to fuel its export-led growth in the past.

A recent International Monetary Fund (IMF) analysis even suggested that a significant currency depreciation to the tune of at least 13 percent by the advanced economies or 20 percent by the emerging economies can drive export volumes up by 10 percent over five years. These findings make the prospect of currency depreciation quite unproblematic. But the same analysis adds a caveat that the benefits from a weaker currency can only accrue when the economy is not running at full capacity; a situation which arises in times following a recession.

In the Indian case, there remains some scope for capacity expansion, which hit a two-year high of 75.2 percent in March 2018 as per Reserve Bank of India (RBI) data. So, the economy can make export gains from a depreciating rupee over the next few years. However, one needs to be wary of making sweeping generalisation from studies like the one done by the IMF. The nature of Indian exports is such that one-to-one gains cannot be made from a depreciating rupee. The Indian service industry can barely benefit from such depreciation because the industry tends to be highly price insensitive.

Second, as currency depreciation is not unique to India, the country’s domestic exports might not be as attractive in the global markets. Third, the world economies have become more protectionist in nature of late. So, prospects of an expansion in Indian exports seem quite bleak in the near future. Keeping these factors in mind, it is quite naïve of the government to make claims that the recent currency depreciation has a silver lining.

That being said, the world economies also need to come together to delink themselves from the cycle of American monetary policies. The US dollar-led financial world order is flawed in the sense that it takes away the monetary independence of the central banks around the world. Nations had collectively decided to peg their currencies to the dollar decades ago as the stability of the currency had insulated their economies from volatility and allowed them to trade on a common unit. But after the dollar’s surge since 2011, it has lost that utility. The world might be better off to trade in its own currencies. Since that might become too cumbersome, shifting to another stable common currency might have a greater appeal. The IMF’s Special Drawing Rights (SDR), which is an aggregation of the five major currencies of the world, is the closest alternative.

Along with ushering in a spirit of international cooperation on the financial front, India also needs to put its own house in order. A large part of the country’s macroeconomic vulnerability arises from an excessive import dependence on crude oil. To address this limitation, India requires a significant push on domestic oil exploration and production. Efforts on this front have been lacking in the last two decades. Also, the country needs to debunk the belief that currency depreciation will eventually drive exports and improve the productivity of the utilisation of its resources. The gap between Indian labour and capital productivity has been widening against advanced countries like the United States when it should have been the opposite. Such concerning trends should be at the centre of the country’s policy debates. Only then will periodic blips in currency become a non-issue.

The article was published with First Post on September 10, 2018.