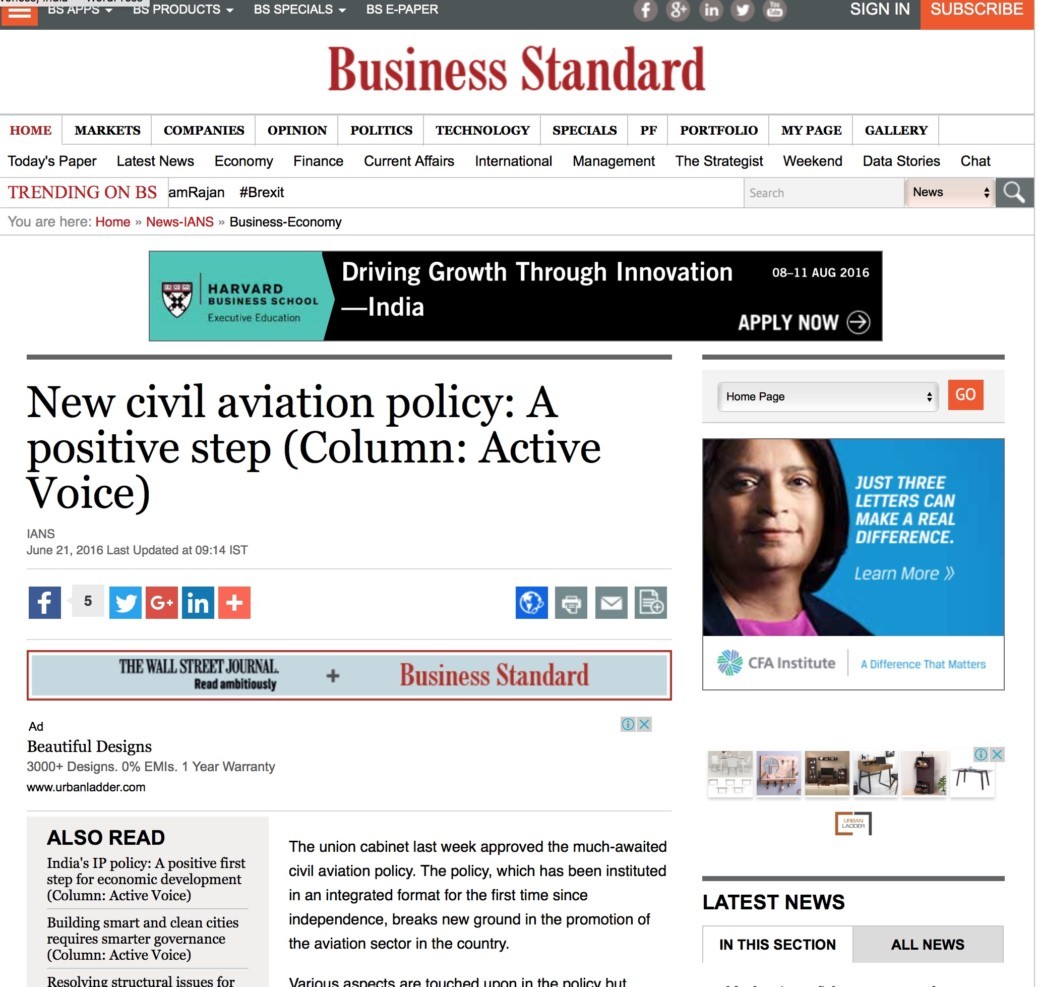 The union cabinet last week approved the much-awaited civil aviation policy. The policy, which has been instituted in an integrated format for the first time since independence, breaks new ground in the promotion of the aviation sector in the country.

Various aspects are touched upon in the policy but broadly there are four areas where the policy breaks new ground. These include:

First and foremost is partial doing away with the 5/20 rule. This offers newer players, entering the market and in the market at present, a chance to compete with the incumbents in the industry. In this way, it is a right step. The 20 aircraft clause, which still exists, will ensure that there is sufficient experience/risk taking ability before going international. The 20 aircraft requirement is also modified to add 20 percent seats of total capacity, whichever is higher, for domestic operations.

The second important aspect of the policy is from the viewpoint of the industrial development of the sector. The policy clearly spells this out in the promotion of the MRO (Maintenance, Repair and Overhauling) as well as in skill building around the sector. The MRO business of Indian carriers is around Rs 5,000 crore, 90 per cent of which is spent outside India. The policy intends to correct the duty structure on this and even look at the provision of land in this regard for building MRO facilities. Also, a royalty break will be given to providers for an initial period of five years.

With regard to skilling, the policy estimates that by 2025 about 330,000 additional employment will be required. For this, the policy states that the Ministry of Corporate Affairs (MOCA) will support skill-imparting organizations for imparting skills necessary for India’s growing aviation sector. In this way, the policy promotes business creation as well as the creation of skills required in the sector.

The third important aspect of the policy is from the viewpoint of consumer interest. The policy mentions a figure of Rs 2,500 per passenger for a one-hour flight. It is part of the regional connectivity scheme, which has benefits for airline operators as well. It includes reduced excise duty at two percent on ATF prices and operations viability gap funding (VGF) to airline operators. The VGF funding will be in the ratio of 80:20 between MOCA and state governments and 90:10 between MOCA and the northeastern states. It will help to drive regional connectivity in areas which were hitherto unconnected or poorly connected by way of airlines.

The final important feature is the route dispersal guidelines, which categorizes domestic operations into three categories. Category I is to be rationalized on the basis of transparent criteria like flying distance of more than 700 Km, average seat factor of 70% and above and annual traffic of 500,000 passengers. The percentage of category I traffic to be deployed on Category II and IIA will be the same while for Category III it will be 35 percent. The view on the routes will be taken by MOCA every five years. These will help in more systematized operations of flights and overall better connectivity.

The policy is thus timely as it comes when India is expected to become the third largest aviation market by 2020. The policy also looks at both the supply side and demand side to strike a balance for greater services to the common man. It also creates a level playing field for newer players in the market and tries to enable greater competition.

From the view point of the consumers and industry, the policy is well thought through and makes the case for a better-connected India through the mode of aviation. Overall the policy is a step in the right direction for industry and consumers and fixes responsibility clearly on various bodies regulating the sector. It is well articulated, and it is hoped it will be well implemented for the benefit of all the stakeholders.

Published in Business Standard on June 21, 2016. To know more