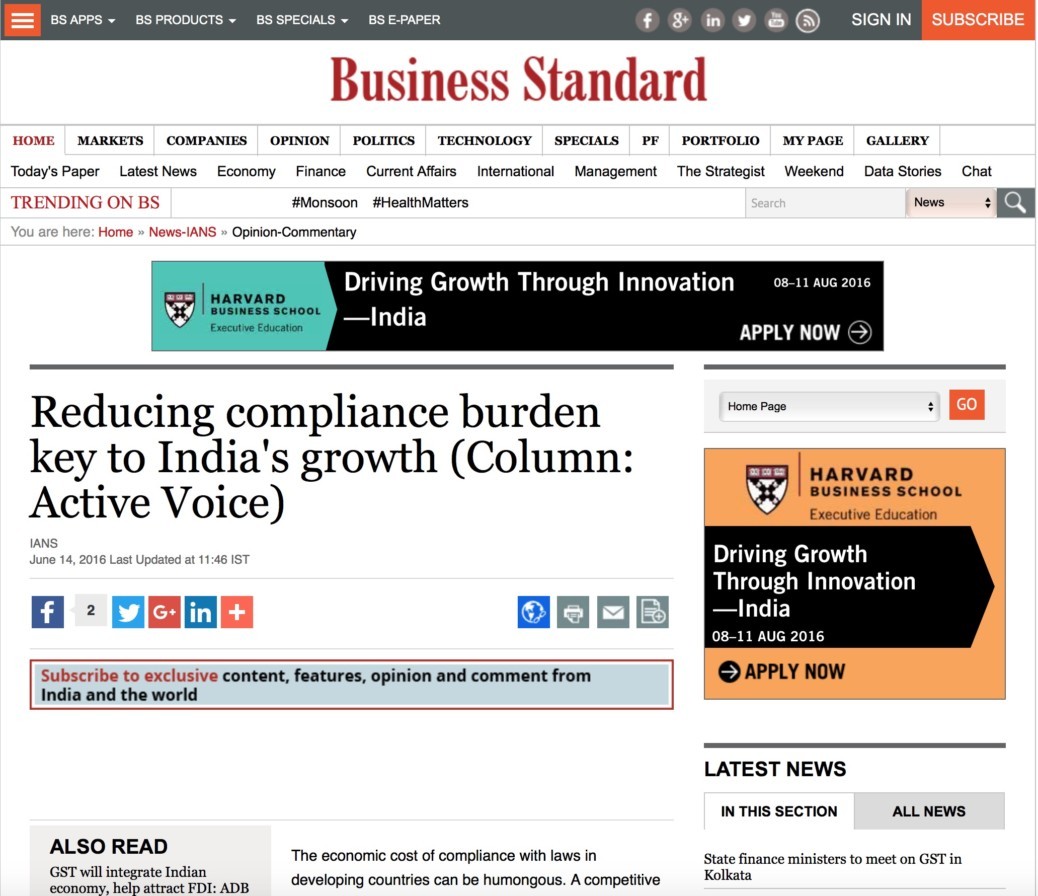 The economic cost of compliance with laws in developing countries can be humongous. A competitive economy reduces the regulatory burden and comes up with solutions to reduce compliance costs.

At present, the compliance cost in India seems to be a drag for both manufacturing and service industries. It makes it cumbersome for them to comply. Not only this, the regulatory burden does have several negatives which can hamper the ease of doing business and hamper programmes like Make in India being undertaken by the current dispensation.

According to a study published by CII and Deloitte in January 2013, there are five broad areas which can be looked at from a regulatory and compliance perspective. It would be interesting to observe the survey and examine the findings even today – because most of the findings would be more or less similar even today.

Across the categories, the respondents were asked to see key challenges that are being faced. These included time taken, unfriendly procedures, outdated requirements/rules, intrusive inspections, lack of clear laws and rules and graft.

All these may have changed incrementally and may have reduced a bit over the past few years, but a majority of them are still areas of significant concern for businesses operational in India.

Recently, in a public forum in Gujarat, a prominent director of a company told the audience that his business had to comply with essentially more than 6,000 rules. These rules cause problems not only in terms of time and cost but also impacts the capacity to productively use time and apply the mind elsewhere. It acts as a significant drag for businesses to creatively utilize time and resources elsewhere.

It is high time India moved towards a more trust-driven approach to viewing business activity and not as some sort of a corporate fraud. Business needs to be seen as a productive activity in society for not only businesses’ sustainability but also the sustainability of the community.

The compliance burden is also seen as a drag on ease of doing business. India fares poorly in the Ease of Doing Business (EODB) and was ranked 130 in the World Bank group’s EODB 2016. Despite this, India is seen carrying out several reforms and seen making considerable improvements.

These include amendments to the Companies Act in 2015 that eliminated the minimum capital requirement of Rs 100,000 ($1,500) to start a limited liability company. Similarly, for construction permits, a single window system for processing applications is being launched in Mumbai. Also, online systems for filing and paying taxes are being improved to simplify tax compliance.

Over the next few years, the need is to reduce compliance costs, enable self-certification, do away with unnecessary legislations, systematize procedures and end discretionary powers to bureaucrats.

All this is easier said than done. But reducing the compliance burden is an ongoing process for making the Indian economy more business friendly and ultimately more competitive. Over the next few years, India should try to make compliance less cumbersome and easier to follow. That will help India to not only unleash the creative energy of its businesses but also become more competitive in the long run.

Published in Business Standard on June 14, 2016. To know more