Focusing on IP alone will not increase access to healthcare

Home Focusing on IP alone will not increase access to healthcare 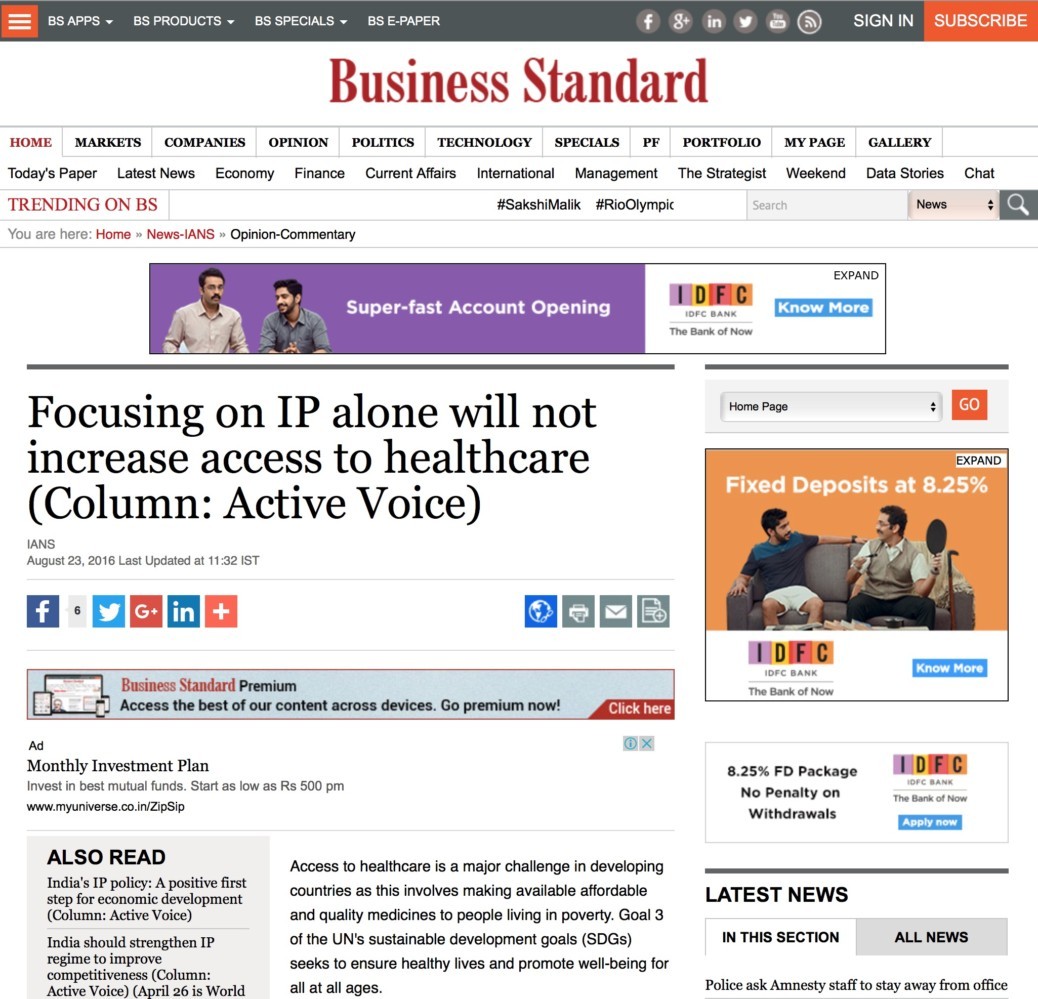 Focusing on IP alone will not increase access to healthcare

Access to healthcare is a major challenge in developing countries as this involves making available affordable and quality medicines to people living in poverty. Goal 3 of the UN’s sustainable development goals (SDGs) seeks to ensure healthy lives and promote well-being for all at all ages.

A recent UN panel has been formed to look into the idea of access to medicines but somehow limits its scope to just IP & Innovation and these, in turn, act as a hindrance to access. This approach is too narrow in scope and may end up damaging the prospects of healthcare access in developing countries. The damage it may cause is immense as thinking could develop that only IP & Innovation act as the barrier to access while ignoring other factors that might have a considerable bearing on healthcare access in developing countries like India.

There are four essential points about healthcare access in developing countries that need to be factored in before making any decisions on the issue.

First, the challenges of access to medicines is not limited to IP alone. There are other issues like infrastructure challenges — lack of proper storage and distribution facilities. Often in India with its three-tiered hierarchy, the lowermost level often does not have proper medicines or trained manpower to look into patient ailments.

Also, there are challenges in the supply chain which prevent access to medicines. Some medicines have to be cold-stored and studies have found often these medicines are not stored the way they should have been, resulting in them being rendered ineffective. Similarly, most doctors prefer living in urban areas, which is an impediment to Goal 3 and prevents healthcare access in rural areas. Likewise, healthcare insurance penetration levels are low in India leading to out-of-pocket spending by people and lack of finances for chronic diseases.

Second, the role of IP is not just protection of rights of inventors. It must also be seen as a mechanism for provision and discovery of medicines which could change the prospects of treatment of diseases. Some diseases — like AIDS — still do not have medicines that can cure. These require investments in research and development for companies to come up with new drug discoveries. Removal of incentives to innovate for companies could be detrimental to finding the cure to diseases which are there at present and some which may arise in the future.

Third, the panel’s overt focus on policy incoherence does not seem to do justice to the unique nature of the Indian context. The patent system is fairly robust and has worked well all these years to guarantee rights of inventors and balance it with public health challenges in the developed world.

Also, in a country like India, most pharmaceutical companies generally manufacture generic drugs. These are made available to consumers at relatively cheap prices. Apart from this, there is also a mechanism of controlled pricing of drugs under the National Pharmaceutical Pricing Authority (NPPA), which brings out its essential medicines list. With these mechanisms and scenario in place drug pricing through stronger IP does not have a considerable impact. Even if such a scenario arises, this can be challenged in the court of law and adequate safeguards ensured.

Finally, a recent report by KPMG in India talks about access challenges of healthcare which the panel seems to miss. These include:

* Low number of hospital beds per 1,000 people at 0.9 which is the lowest among BRICS economies

* Nearly three-fourths of the population is uncovered by health insurance; out of pocket expenditure contributes to 60 per cent of the overall healthcare expenditure

All these factors make the situation in India unique, and a narrow focus on IP will not solve any of these challenges relating to access.

It is time that the UN panel broadens the scope of the exercise to include issues affecting people and not just look at IP, which is a part, but not the whole, of the problem relating to access to medicines in developing countries like India.

Published in Business Standard on August 23, 2016. To know more