Jobless growth: Focus on manufacturing instead of services would have spurred employment, reduced poverty

Home Jobless growth: Focus on manufacturing instead of services would have spurred employment, reduced poverty 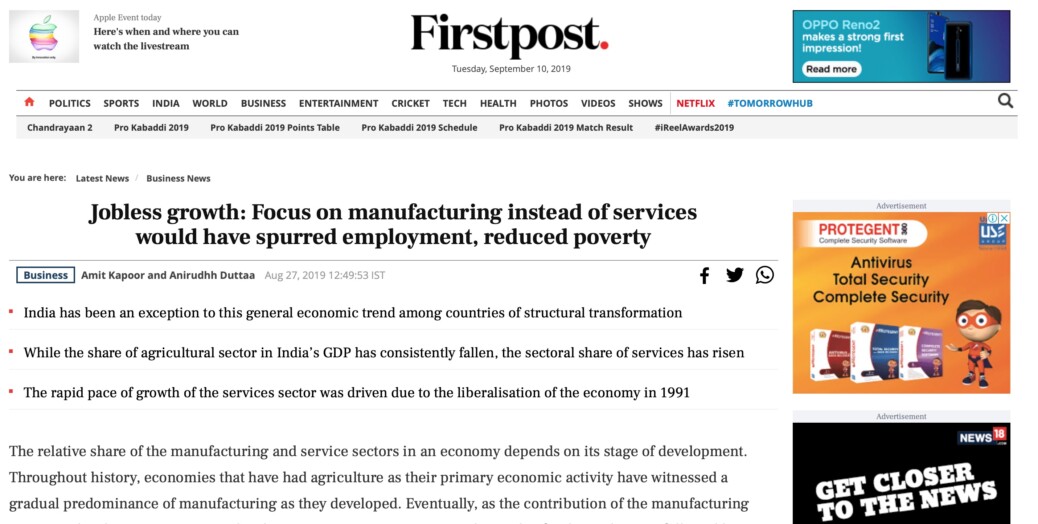 Jobless growth: Focus on manufacturing instead of services would have spurred employment, reduced poverty

The relative share of the manufacturing and service sectors in an economy depends on its stage of development. Throughout history, economies that have had agriculture as their primary economic activity have witnessed a gradual predominance of manufacturing as they have developed. Eventually, as the contribution of the manufacturing sector peaks, the economies start developing a strong service sector. This cycle of industrialisation followed by deindustrialisation is generally referred as the structural transformation and has been experienced by almost all developed nations through history. Most of the developed countries, including the East Asian middle- and high-income countries have gone through this transition from being agriculture-based to an industrial one and, finally, to being service-led.

India has been an exception to this general economic trend among countries of structural transformation. As seen in Figure 1, since independence, the share of manufacturing in the economy has almost remained constant. While the share of the agricultural sector in India’s GDP has consistently fallen along expected lines, the sectoral share of services has risen instead of manufacturing. This has become especially evident over the past three decades.

As seen in Figure 1, the share of agriculture in the GDP, which has fallen from 26 percent in 1990 to 14 percent in 2018, has been almost entirely picked up the service sector, which has risen from 36 percent to 49 percent during the same period. The rapid pace of growth of the services sector was driven due to the liberalisation of the economy in 1991 as outsourcing was found to be particularly lucrative by the developed economies as wages were low in India and the country had a skilled English-speaking workforce. However, the manufacturing sector realised no such benefits as Indians did not have a competitive advantage on that front. 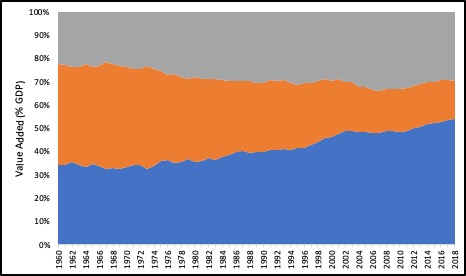 An economy that has managed to benefit through its competitive advantage in manufacturing is China. Over the last few decades, China has carved a reputation for exporting manufactured goods. In the process, the country has grown at a faster pace than the Indian economy and at a more sustained rate. The figure below compares the growth trajectory of India with that of two major Asian economies, China and South Korea. While China and South Korea’s growth was based upon their manufacturing prowess, India growth was primarily led by services. 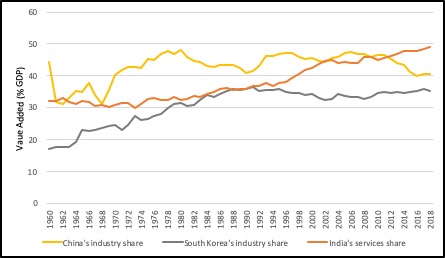 However, India’s unique path of structural transformation is not necessarily good for the economy as services is not as labour-intensive as manufacturing. Economies like China and South Korea have been able to provide more jobs to its citizens and reduced poverty at a faster rate in the process due to their shift to manufacturing before services. India’s skewed nature of growth of the services economy has resulted in a history of jobless growth instead.

The article was published with First Post on August 27, 2019.