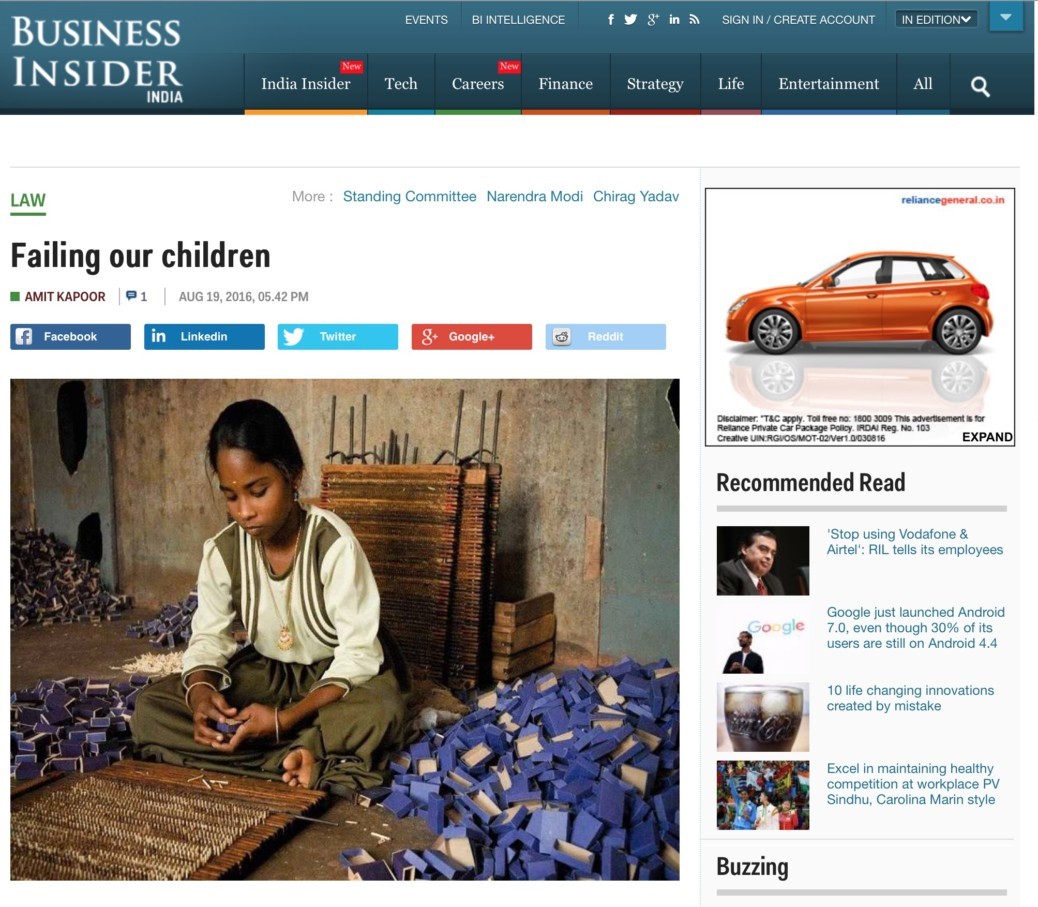 Amidst all the celebratory din on the clearing of the GST bill, the Child Labour (Prohibition and Regulation) Amendment Bill, 2016 passed both the houses of Parliament without the attention it deserved. The Bill amends the Child Labour (Prohibition and Regulation) Act, 1986 which had banned the employment of children, that is those below 14 years of age, in 83 specified occupations/processes. The amendment prohibits engagement of children, which it now defines as 14 years or as specified by the Right to Education (RTE) Act, in all occupations except in family or family-based enterprise (after school hours or during vacations) and in the audio-visual entertainment industry or sports activity. It also created a new category of “adolescent”, which includes those between 14 to 18 years of age, and prohibits their employment in hazardous occupations, or hazardous processes.

There have been widespread criticisms of the exceptions for family or family-based enterprises since it was cleared by the Cabinet in May last year. The government did away with the blanket ban on child labour, proposed when the bill was first introduced in 2012, to strike “a balance between the need for education for a child and reality of the socio-economic condition and social fabric in the country”.

First, if the reality of the socio-economic condition is forcing parents to keep their child working, this situation can’t be expected to improve anytime soon if status quo remains and children keep missing out on their education. And since, according to a study, parents are the reason for a child’s employment 62% of the time (Syed et al. 1991), the status quo would persist. There is much to be lost if India can’t capitalise on its demographic dividend being unable to tear itself away from the shackles of an uneducated population. The bill does restrict working hours to after-school timings, but where would the child have the time for any effective learning of things taught at school if he is at work later? Secondly, these exceptions have enough loopholes to nullify the amendment itself. They are not even restricted to the child’s immediate parents but extends to his/her “brother, sister and father’s sister and brother and mother’s sister and brother”. Any employer could claim to be a relative and it would be difficult to prove otherwise. Even the Standing Committee recognised this issue and suggested removal of exceptions and prohibition of employment in all occupations. The recommendation was ignored.

The exceptions also make the law weaker than the earlier one when the purpose of amendments are the exact opposite. Earlier, a child weaving carpets was a blatant violation of the law. Now, it must first be determined who he is working for; if it is for his family in after-school hours, he is legally entitled to carry on. The bill has effectively legalised employment of children in home-based units rolling bidis and making aggarbattis. This makes the bill highly regressive in nature and tougher to implement. It is an uncomfortable relaity that it has passed both houses of Parliament with hardly any public scrutiny.

Some other issues with the Bill are its various inherent contradictions. The Juvenile Justice Act puts the age of a child at 16 years while the RTE Act, which this bill has tied itself with, fixes it at 14. There is a need for clarity on the definition of a child. Moreover, the Bill is in contradiction with the UN Convention on the Rights of the Child as it fails to define the number of hours a child can work. Another issue of contention was that of provisions for the employment of adolescents. The Standing Committee recommended that the meaning of hazardous occupations and processes be widened to include all occupations/processes that may jeopardise health, safety and morals of adolescents, in line with the ILO Convention 138. Again, the recommendation was ignored.

A group of organisations and activists have raised their voices against these amendments time and again with no avail. Back in March, Kailash Satyarthi wrote in a letter to Narendra Modi that a complete abolition of child labour would attract more global investment as reports of their products being made by children tarnish their image. For instance, Gap was caught in an embarrassing scandal in 2007 after an Observer investigation found its products being manufactured by children in Delhi, despite Gap’s rigorous audit systems. The company claimed that it contracts out work to various vendors in India and it becomes difficult to keep track on each one of them. Therefore, a better child labour law in India which is easy to implement would diminish such problems. In fact, it would act as a double-edged sword cutting down on child labour along with improving investment prospects. Perhaps the country should pay more heed to the child-rights activist and Nobel Peace Prize winner it takes so much pride in!

Published in Business Insider on August 19,2016. To know more