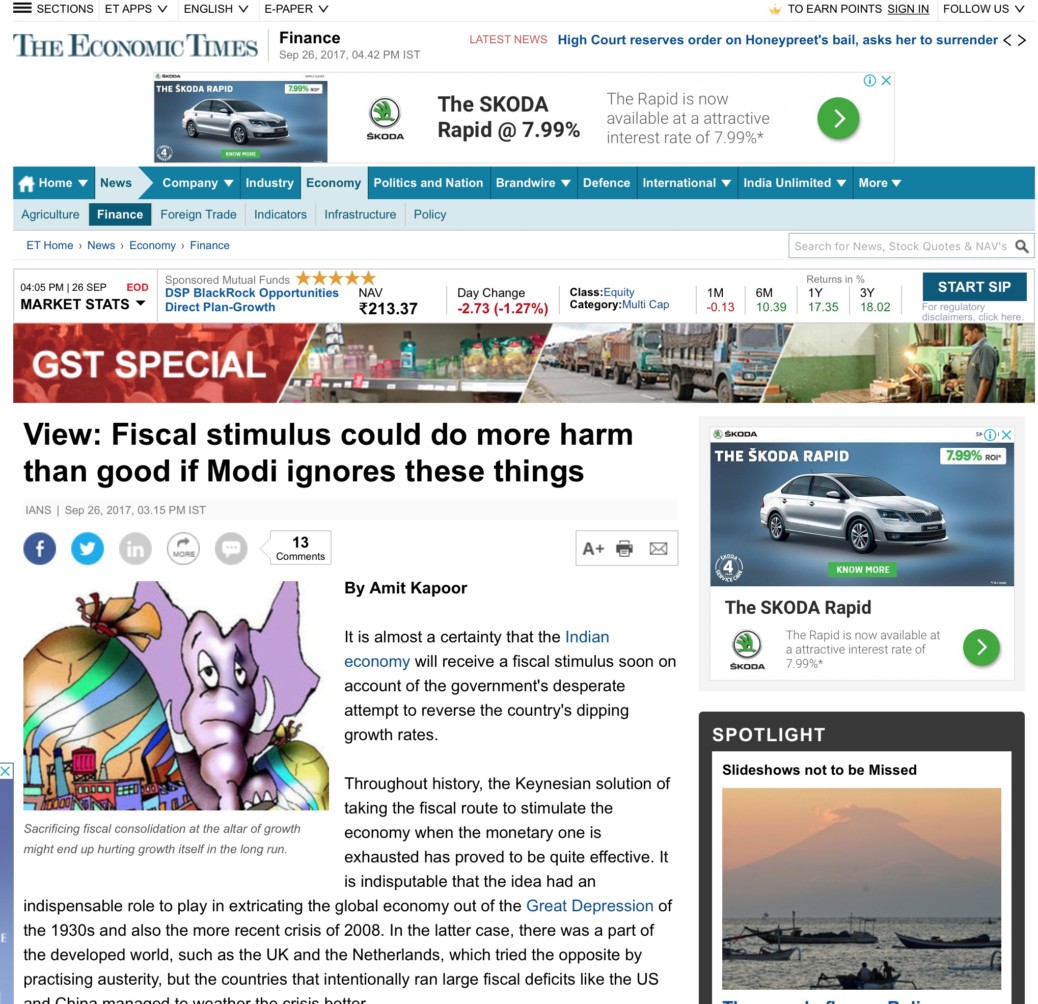 It is almost a certainty that the Indian economy will receive a fiscal stimulus soon on account of the government’s desperate attempt to reverse the country’s dipping growth rates. Throughout history, the Keynesian solution of taking the fiscal route to stimulate the economy when the monetary one is exhausted has proved to be quite effective. It is undisputable that the idea had an indispensable role to play in extricating the global economy out of the Great Depression of 1930s and also the more recent crisis of 2008. In the latter case, there was a part of the developed world, such as the UK and the Netherlands, which tried the opposite by practicing austerity, but the countries that intentionally ran large fiscal deficits like the US and China managed to weather the crisis better.

There is now a consensus among post-crisis empirical studies that fiscal stimulus has a positive effect on the economy. Therefore, the Indian government might also find some reprieve from adopting a similar approach. However, there are quite a few issues that should be kept in mind before going ahead with the move.

First and the most obvious concern is of deviating from the path of fiscal consolidation. India has had the widest budget deficit in Asia and the government has done a good job of committing itself to pre-decided goals of reducing it each year. In fact, achieving macroeconomic stability has been one of the biggest achievements of the Modi government. However, this year’s budgeted deficit is 3.2 percent and the government has already exhausted 92 percent of the annual target in the first four months of the current fiscal.

Even though Arun Jaitley has promised to find a balance between fiscal prudence and spending, any stimulus package that the government announces needs to be introduced with commensurate revenue streams or risk breaching the fiscal commitments. Any deviation from the fiscal consolidation roadmap will have serious long-term repercussions that will be costlier for the country than a gain of a few percentage points over the course of this year.

First, there exists the risk of a loss of any credibility in government commitments. A lack of trust among economic agents simply escalates the costs of economic transactions and makes public policy harder to implement. Second, India will run the risk of being downgraded by international credit rating agencies if it fails to meet its fiscal commitments. Third, global investor sentiment will be hurt in such a scenario and due to a combination of the last two factors, foreign inflow of money will be negatively impacted. Therefore, sacrificing fiscal consolidation at the altar of growth might end up hurting growth itself in the long run.

The second issue that needs to be taken into account is the impact of the newly-implemented goods and services tax (GST). For instance, as GST tax credit claims escalate, government finances would be drastically affected. Since the full impact of tax implementation is still unclear, a margin of error should be allowed in the fiscal calculations so that there is no shortfall towards the end of the year.

Third, the US Federal Reserve has signalled its intention to unwind its massive bond-buying programme and India needs to brace itself for impact. Although India has sufficient reserves to manage any large-scale outflow of money due to the Fed’s decision, uncertainty will still reign supreme and giving up fiscal restraint at the moment will be quite irresponsible.

Thus, although a fiscal stimulus might be a good idea abandoning the practice of fiscal consolidation is not. Also, the quality of the fiscal stimulus matters quite significantly. Running deficits without creating productive assets only burdens future generations with higher debts. On the other hand, high return public investments more than pay for themselves and improve the well-being of future generations. So, apart from ensuring that the fiscal targets are met despite the stimulus package, its quality also needs to be ensured.

As pointed out in our last week’s column, the banking system should be the first line of attack of the fiscal arsenal. Boosting the credit offtake of the economy will go a long way in kickstarting lending activities and, hence, private investment. Since desperate times call for desperate measures, recapitalisation of banks can be a possible option to consider.

Next, in the spirit of leaving future generations with lucrative assets along with handholding the economy out of the current mess, the fiscal stimulus can have a heavy focus on infrastructure spending. This can also help in mitigating the unemployment problem that is also ailing the economy.

Finally, along with these short-term measures to revive the economy, the government should not shy away from long-term structural reforms, especially in land, labour and agricultural markets. The slowdown is popularly blamed on demonetisation and GST, but the growth figures clearly show that the trend had set in much earlier. This points to a deep-seated problem within the Indian economy that goes beyond the temporary shocks that it has received. Considering all these factors, the government is in a completely unenviable position currently. In Shakespeare’s wise words, uneasy lies the head that wears a crown. It remains to be seen how well it manages to handle the crown.

The article was published with Economic Times on September 26, 2017.