India Competitiveness Report and its findings 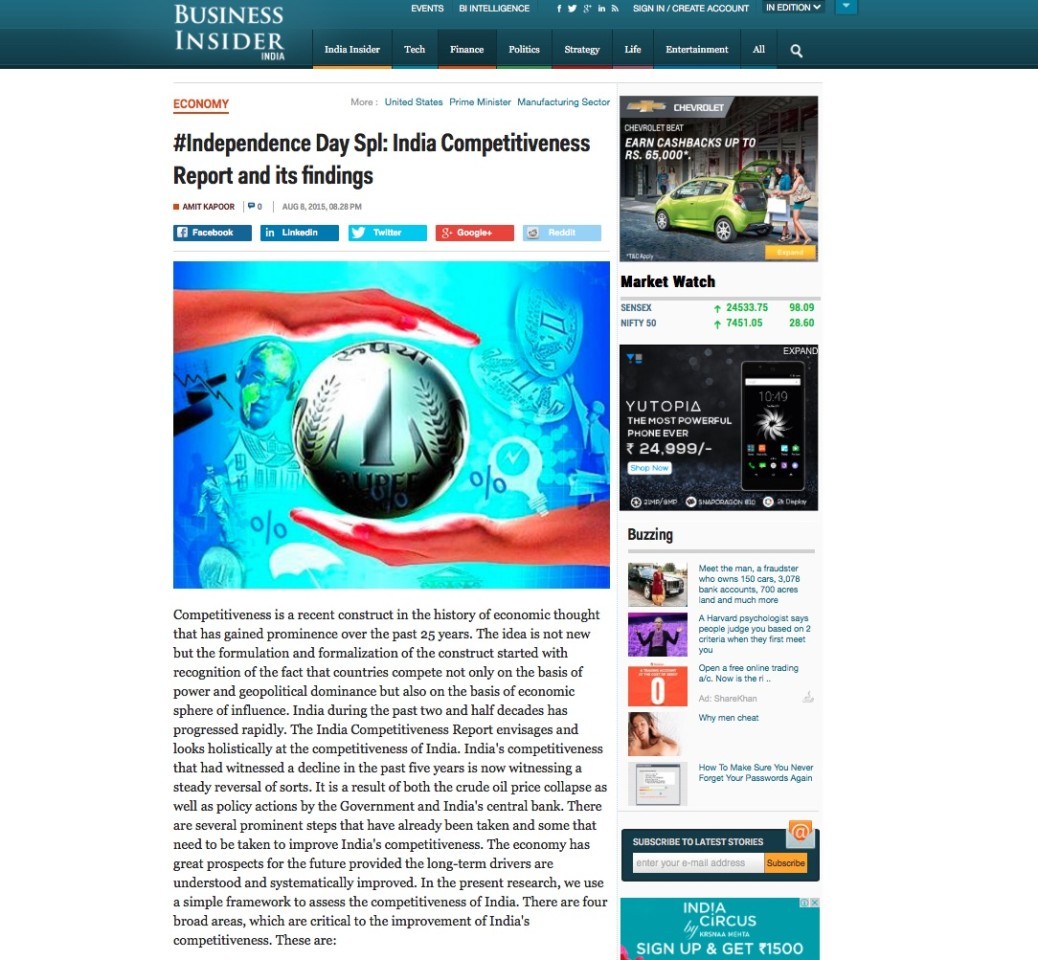 India Competitiveness Report and its findings

Competitiveness is a recent construct in the history of economic thought that has gained prominence over the past 25 years. The idea is not new but the formulation and formalization of the construct started with recognition of the fact that countries compete not only on the basis of power and geopolitical dominance but also on the basis of economic sphere of influence. India during the past two and half decades has progressed rapidly. The India Competitiveness Report envisages and looks holistically at the competitiveness of India. India’s competitiveness that had witnessed a decline in the past five years is now witnessing a steady reversal of sorts. It is a result of both the crude oil price collapse as well as policy actions by the Government and India’s central bank. There are several prominent steps that have already been taken and some that need to be taken to improve India’s competitiveness. The economy has great prospects for the future provided the long-term drivers are understood and systematically improved. In the present research, we use a simple framework to assess the competitiveness of India. There are four broad areas, which are critical to the improvement of India’s competitiveness. These are:

Macroeconomic development includes the macroeconomic forces shaping India’s reality at present. The stage of the economy (based on per capita GDP levels) and several other macroeconomic factors like fiscal deficit, trade and GDP as well as future potential determine to what extent is the country is able to attract foreign investment Also, leadership is a critical determinant of investment attraction. Investment is critical not only from the point of view of setting up enterprises that provide jobs but for economic development as a whole. Investment also includes the development of infrastructure, which has a multiplier effect on the economy based on improvements in efficiency thus leading to better productivity and competitiveness.

India’s competitiveness at present is determined by some critical issues. The first of these is recognizing that states and cities are the critical building blocks of competitiveness and rightly the government has focused on the same. Diversity and unity of Indian states and the growth of Indian cities will fuel the next phase of growth in India. How do we compare states when they are so diverse? What are the policies and ideas about development that a state can learn from and cross-fertilize to other states? These are crucial questions that should be looked into by policymakers. New cities and better administration of the existing ones will determine the growth not only in the urban areas but also growth in general. Already there are several cities that are planned under the smart cities program in India. Crucial questions pertain to environment and livability among Indian cities. The second point is about sectors of the economy. There are several sectors in which India is globally competitive and others where it is yet to take off. There is, of course, a lot of scope for improvement in some sectors mentioned here like agriculture. Agriculture is a very mature sector in the Indian economy but can benefit hugely from appropriate policies and technology improvements. The export sector is again a very important sector from a competitiveness viewpoint as it is helpful in not only expanding market presence but also in boosting trading relationships. The fall in exports during the past six months is a troubling development. The act East policy in foreign trade will help India trade more with our neighbors amid a global slowdown in Europe and America. The PM’s proactive role for investment attraction is again a step in the right direction. Another important area is the SME/ MSME’s space, which again has a huge scope for improvement. The sector has been the bedrock of India’s competitiveness employing a large number of people and contributing roughly to 5% of the Indian GDP. Fundamentally improving the business environment and quality of regulation will go a long way in improving the productivity and competitiveness of this sector. The reforms following the balance of payments crisis in 1991 ushered in a new vibrant and robust financial sector in which both the banks and capital markets have functioned well and have made India competitive globally. NPA’s of banks have risen, and this is a troubling sign. The steps taken by the central bank in the recent past without legislation is helping India regain some of its lost competitiveness. Lower levels of inflation over the next few years will also help India in the future.

There are several factors, which have enabled growth and competitiveness. While some of these factors are present in India, some of them are desirable like better educational standards, low level of corruption, etc. Skill-based education and employability hold the key to leveraging the demographic dividend. The jobs in the past have largely been added in the agricultural and service sectors. More participation of the manufacturing sector will enable not only better jobs but also a host of other service jobs around the manufacturing activity. The ‘Make in India’ campaign similarly wants an indigenous production with the help of corporations and foreign collaboration. The power infrastructure in India similarly is growing at a rapid pace, but better efficiencies in the extraction of coal will help matters. India has an improving infrastructure, but a large number of road projects are presently stalled because of failure to allocate risk properly. Better models and risk allocation will benefit investors, contractors and communities alike. The surface transport minister similarly intends to increase the speed of building of highways to 30 Km a day. It should not be the sole measure of success. The quality of roads should also be focused on.

The area of opportunity section looks at the promise of the future and is focused on balancing the present priorities with the future ones. Healthcare sector is one, which is primarily the responsibility of the government. In India, the growth till date in the sector has been largely driven by a private sector, as the state is unable to cater to the huge demand. It has lead to a unique social business models. The future of the sector will be dependent on availability, access and affordability. While some progress has been made on the ease of doing business much remains to be done. Research and development in India are similarly an area of future opportunity. Strengthening of Intellectual Protection Rights (IPR’s) system will also have to be pursued over the longer time frame. A classic case in point for the betterment of a nation through research and development is the United States of America. America does well because of regulation norms as well as the high spending on R and D. The area holds huge promise of India wants to gain future competitiveness.

The main findings of the report are in taking stock of the present drivers of competitiveness along the mentioned four broad dimensions. The key to India’s sustained growth will be how well India does in tackling these specific elements within the broader dimensions. It will impact competitiveness over the next 10-15 years.

Published in Business Insider on August 8, 2015 as a part of Independence Day Special Series. To know more