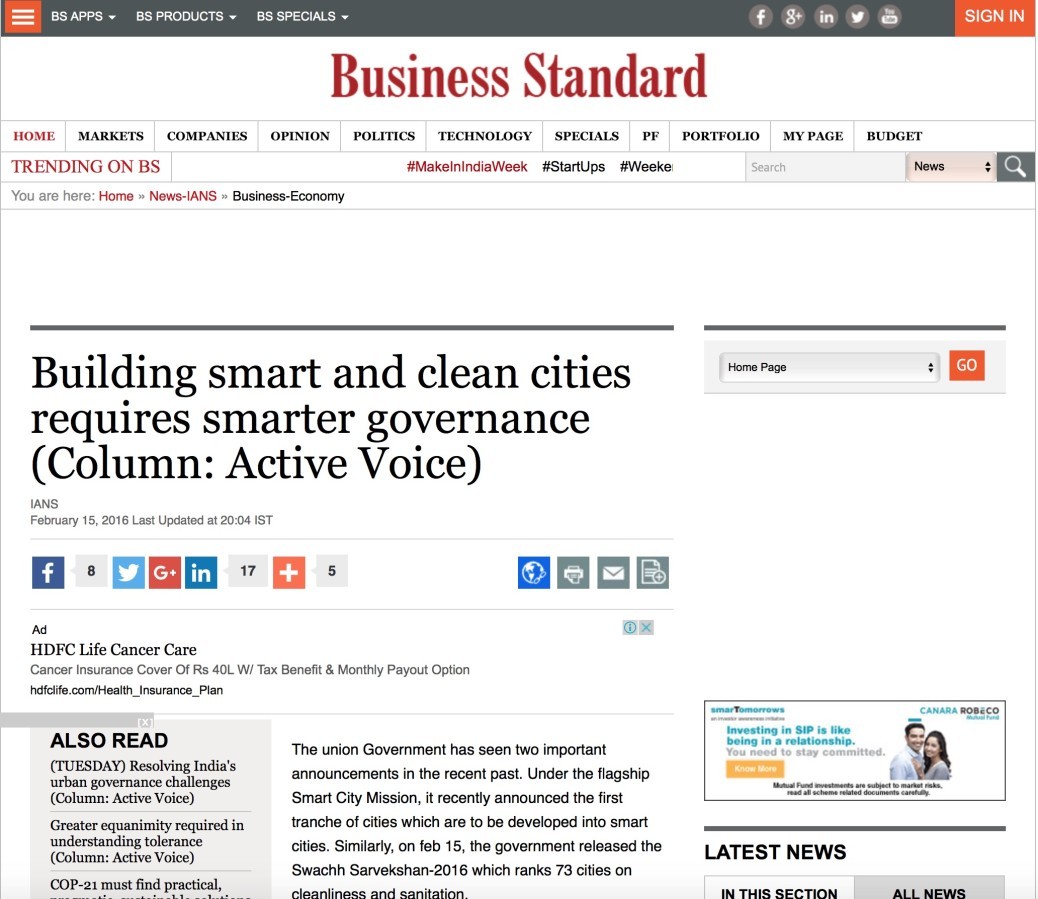 The union Government has seen two important announcements in the recent past. Under the flagship Smart City Mission, it recently announced the first tranche of cities which are to be developed into smart cities. Similarly, on feb 15, the government released the Swachh Sarvekshan-2016 which ranks 73 cities on cleanliness and sanitation.

The first list includes 20 cities, none of which are from some of India’s biggest states like UP, Bihar and West Bengal. Bhubaneswar, the capital of Odisha, has topped the rankings followed by Pune and Jaipur. The government has offered a fast-track window for next 23 cities to upgrade their proposals and submit them by April 15, to be included in the next tranche.

Speaking at the occasion, Urban Development Minister Venkaiah Naidu mentioned that an investment of Rs.50,802 crores has been proposed for selected smart cities and towns during the next five years. The first tranche was chosen through a transparent and competitive process according to Naidu.

The Swachh Sarvekshan-2016 had a list of cities with a population of more than 10 lakh. The best performing cities lie towards the south and west. Chandigarh and New Delhi were also in the top 10 of the cities considered for the latest round of Swachh Sarvekshan-2016. The east and some portions of the north had cities which have been found to be relatively filthier. Asansol (72) and Dhanbad (73) are at the bottom of the list.

However, the main challenge that confronts all the programmes of the government is that of execution and implementation. Implementation is a major challenge for all the projects that India is working on – be it highways, railways or refineries or even present and previous urban development projects in different spaces even for cleanliness.

This is because delays are a norm in India’s project schedules. Rarely do projects get completed on time and if they do, they often become headlines. A few weeks ago, Prime Minister Narendra Modi rightly lamented the cost and time overruns that have plagued India’s implementation capability in the past.

Their study also points to the startling fact that an astounding 36 percent of the urban projects suffered from both time and cost overruns. Their analysis offers a cautionary tale to the policymakers in India to look at what went wrong in the case of the previous urban projects.

There may be several reasons for India’s implementation deficit. Some argue that in a democracy, things often require time as opposed to an autocracy. While there is some semblance of truth to this claim passed on as collective wisdom, mostly, it is a problem of coordination between agencies and precisely fixing responsibility.

Implementation within the smart cities/clean cities will be a major challenge as the underlying governance structures are where the core of the problem lies. This bridge between the municipal and the union level is a welcome one but much will depend on the implementation of projects on the ground. The focus on technology and public scrutiny to improve systems is another positive from the side of the government. The policymakers will do a host of good to learn from the successful and not so successful experiences of the previous administration. It is hoped in the process the present government is able to build clean, healthy and smarter cities.

Published in Business Standard on February 15, 2016. To know more