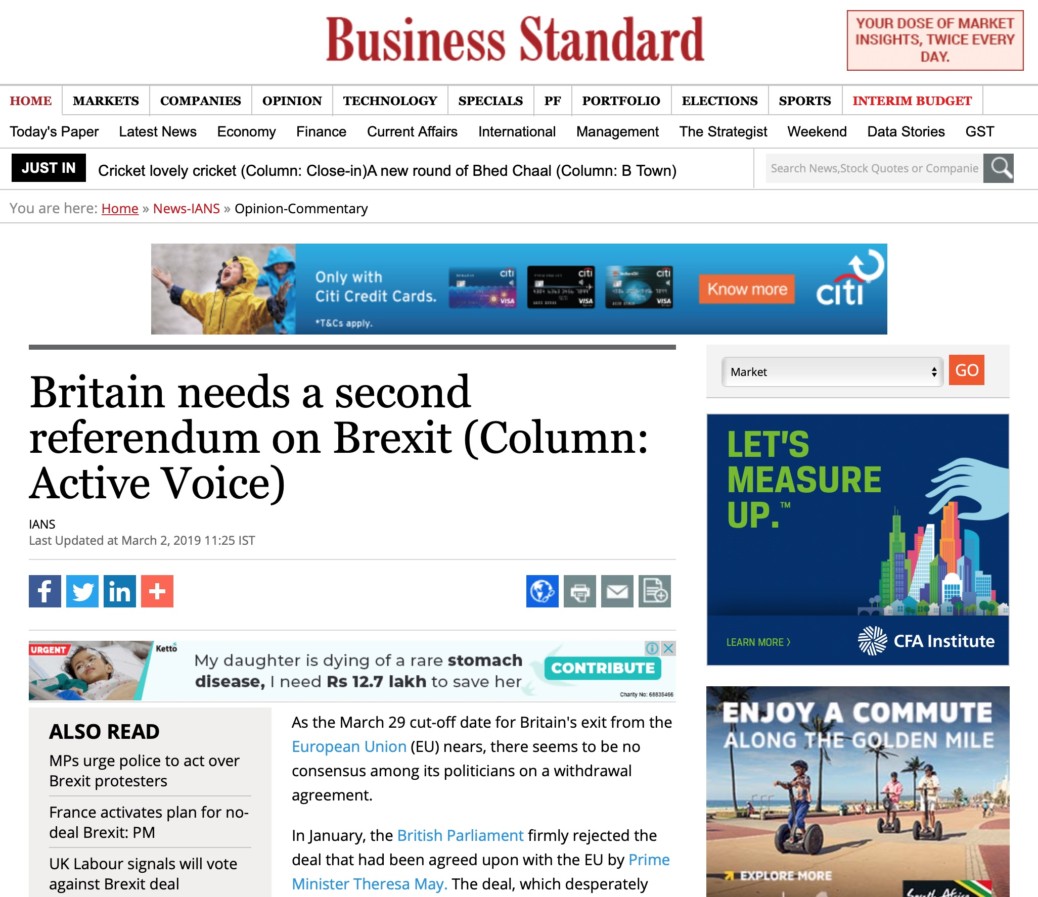 As the March 29 cut-off date for Britain’s exit from the European Union (EU) nears, there seems to be no consensus among its politicians on a withdrawal agreement.

In January, the British Parliament firmly rejected the deal that had been agreed upon with the EU by Prime Minister Theresa May. The deal, which desperately tried to please both the Leave and Remain camps by allowing the United Kingdom (UK) to stay within the EU single market while allowing for independent trade deals with other countries, ended in a unanimous agreement on rejecting it. For both factions it was worse than the status quo as it implied staying within EU and being bound by its rules while forfeiting the power to influence its laws.

However, with merely a month to go before the cut-off date for Brexit, the possibility that no deal can be agreed upon by British MPs seems more and more likely. In fact, ‘game theory’ can explain why a no deal is the only outcome that is in everyone’s best interests. For the benefit of the general reader, game theory is a branch of mathematics that explains strategic interaction between decision-makers. The latter are considered “players” in a “game”, who have to choose from a set of strategies available to them. Each player is assumed to be rational in the sense that they choose the highest payoff for themselves.

In Britain’s case, the players are the MPs in the Leave and Remain camp. It must be noted that such an assumption is quite simplistic in nature as the leanings of the political class in Britain are not as binary. But it should serve the purposes of our model without deviating away from the reality too much. Currently, both sides have two options to choose from: back May’s deal or reject it. The game theoretic approach shows why it is in both their interests to reject her deal. For those familiar with mathematical jargon, the game is akin to the Prisoner’s Dilemma.

In the case of the Leave MPs, supporting May’s deal can result in either of two outcomes: the deal goes through as it is or May pushes it through by giving some concessions to the Remain camp like staying within the customs union to gain a few votes from them. On the other hand, rejecting her deal can imply that May agrees to concessions for their own camp or Britain crashes out of the EU with no deal in place. The latter option works in the best interests for the Leave MPs. Rationality, thus, implies rejecting May’s deal.

Meanwhile, a similar line of reasoning is also being followed by the opposite group. For the Remainers, supporting May implies that it can either go through as it is or she gives out some concessions to the Leave MPs. To the contrary, rejecting it would mean that she could agree to pro-Remain concessions. It could also result in a no-deal scenario, which wouldn’t be in their best interest. But there is always a possibility of a second referendum or general elections taking place before March 29, which could help the cause of the Remainers.

So, it is evident that moving towards a no deal scenario is the only likely outcome for most rational British MPs even though supporting May’s deal is a scenario that nobody favours in particular but has something for everybody (like the outcome in Prisoner’s Dilemma where both snitch on each other even though the scenario where nobody talks gets them lower jail time).

Even hard Brexiteers agree that a no-deal scenario would be extremely disruptive for the British economy at least in the short term. Within a day, UK would crash out of the EU. WTO trading rules would apply between the two. Border checks would become necessary. The supply of essential goods will be affected. Free movement of people between UK and EU would immediately come to a halt. Flights would have to be limited. And the most concerning outcome would be a hard border between Ireland and Northern Ireland, which could spiral into needless sectarian violence and bloodshed.

The Leave campaign sees benefits in these short-term disruptions. They have argued for a Brexit so that Britain could get greater control over its trade deals and its borders. However, the question remains whether the price that an already-ailing economy of UK will have to pay for such an outcome will be worth the losses. For some Leave supporters a no-deal Brexit is the truest form of Brexit. But there are many Brexiteers who dread the idea of a no deal. So, like we have argued before, a second referendum should be the answer for Britain now that the voters are more aware of the likely outcomes. The only other option is no deal and an avoidable economic disruption. No Brexit voter in 2016 could have foreseen the present outcome.

The article was published with Business Standard and Outlook India on March 2, 2019.